It’s February 13th today. Not a notable day as such, unless it’s your birthday or you win tonight’s lottery, or perhaps are a scientist who during the day discovers the chemical element plumium.

If today had been a Friday it would have assumed an altogether high profile in the psyche of the superstitious. Individuals who subscribe to tales of folklore; those holding great store by fabled bad luck omens passed down through generations.

I’m not overly superstitious, although I don’t like tempting fate, which I suppose indicates I believe in the existence of good and bad fortune on some level.

Common sense dictates that every day in the calendar will hold bad luck of differing magnitude for people around the globe. Why should Friday 13th be any worse? ….. Unless you live with Jason Vorhees of course!

Evidently, the fear of Friday the 13th is called paraskevidekatriaphobia. I’m not really sure why I’ve added that snippet of detail as, like me, you’ll probably forget the name by the end of the narrative. If you do possess the wherewithal to recall the name, it’s worth remembering the word is worth 2,001,059 points in Scrabble.

As far as I’m concerned, if you can remember how to correctly spell paraskevidekatriaphobia you deserve 2 million points and a comfortable victory at Scrabble. 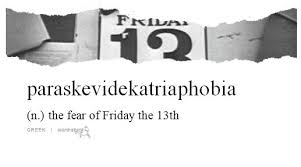 No one is definitively sure where or when the dark omens surrounding Friday the 13th started. Some scholars place it back to possible biblical origins, a consequence of thirteen people attended Jesus’ last supper prior to his crucifixion on a Friday.

Other historians moot it’s origins have roots from Friday October 13th 1307. A day when Philip IV of France arrested hundreds of the Knights Templar. Legend has it the event was scheduled for the day before, but was delayed 24 hours as the king’s wife wanted running to the Matalan store on the Thursday for scented candles.

As I don’t believe Matalan existed until the 17th century, when the market for haberdashery replacement after the 1666 Great Fire of London boomed, it’s a tale unlikely to bear credence.

However, should the yarn be true, if Philip IV’s wife hadn’t needed an aromatic candle that fateful day, Thursday 12th would be the day folklore deemed riddled with misfortune. Which may explain my misfortune on Thursday 12th March 2015, when I was injured during a wildebeest stampede in Crossgates shopping centre.

In his novel Da Vinci Code, Dan Brown cites the superstition started after the execution of Templar Grand Master Jacques de Molay, which took place on Friday the 13th. Just prior to his death, he cursed the Pope and the King of France, and legend has it that this spread misfortune down the ages.

Alternatively, there’s an east Leeds man who claims the date holds bad luck after Friday 13th August 1965, when the Skyliner fish and chip shop completely rang out of cod……. However, according to a different local source that is ridiculous notion which bears not one shred of truth…… It was haddock!

As I said above I’m not overly superstitious, although I’d say I’m cautious about ridiculing the validity of the superstitions. If truth be told, on occasion I’m a bit confused what is good and bad luck.

For example, I’m mystified about whether black cats are supposed to represent good or bad fortune. My online research sources seem contradictory, meaning I remain unfulfilled in my search for the truth. Consequently, when I see a black cat I don’t know whether to be concerned or go provisionally book a cruise.

Last year 13th May was a Friday. If memory serves me correct, my wife was away at her parents being re-indoctrinated with her mum’s delightful ideology of “If you can’t say anything negative about someone, say nothing at all!”

With my wife away listening to her mum’s old wives superstitions, such as why on a Friday 13th she walks backwards for 50 metres if she sees a crow on the same side of the road, I took the opportunity to spend time with my parents.

This consisted of being in the company of amiable hosts who provided a warm, funny and welcoming environment; not forgetting a superb dinner. Mater and pater greeted me like the prodigal son, for whom nothing was too much….. Well, apart from the cost of the pork joint they’d bought for dinner, which they deemed extortionate.

We talked convivially for hours about family, sports, the future and the shared wish someone would discover the chemical element plumium. Having said that, though, the evening wasn’t all plain sailing.

All was well until I helped with the washing up, when I inadvertently placed a spatula in the wrong part of the cutlery draw. I thought I’d got away with it and my OCD dad hadn’t noticed, so went sheepishly slipped back into the dining room.

Like a fool I’d forgotten it was Friday 13th and a few minutes later my dad stormed into the dining room like this!! ……. 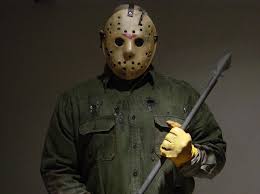