As yesterday’s sun perched at solar noon, in a West Yorkshire suburban garden flickering flames engulfing neatly stacked briquettes in a kettle drum bbq. This combustion resultant from the rendezvous of a firelighter with a lit match; a meeting instigated by a middle age man, random of thought and erratic of mind.

Bearing in mind the stiff breeze, which I though would render my efforts of ignition hopeless,  it was with some relief I stood back to witness the lapping flames evenly engulfing the fuel. With the lighting process now underway, I could now go greet my son Jonny and his fiancée Jenny, who’d recently arrived from York.

When I got back into the house, I greeted them both with a hug and the news the birthday barbeque has been lit. They looked out of the open back door to see an Olympic flame size blaze on the lower patio.

Jonny asked how the opening ceremony had gone and what time the men’s 100 metres sprint starts. I responded with a smile at his quip, but really I wanted revenge and my thoughts turned to sabotaging his food during the cooking process.

As always, it was lovely to see them both.  Jenny is a very engaging young lady and Jonny, although shortly to eat a burger I’d dropped on the floor, a fine lad. He lights up a room with his smile, whereas his miserable ass dad only lights up barbeques.

They’d arrived at chez Strachan to celebrate my wife Karen’s birthday. My daughter Rachel, who is currently residing in Alberta, Canada, was sadly absent. She sent over some flowers for her mum, though, meaning a win/win situation for my missus. She got a present off her daughter, but didn’t have to put up with her chuffing whining!

With the ubiquitous summer breeze acting as a makeshift accelerant, the barbeque briquettes arrived at cooking temperature with inordinate haste, catching us somewhat unaware. The coals were warm enough to cook, however there was still a salad to prepare, table to set and a potato salad to make.

So as I headed out with a plate of raw food to grill on the piping hot coals, Karen, Jonny and Jenny embarked on the remaining indoor chores. 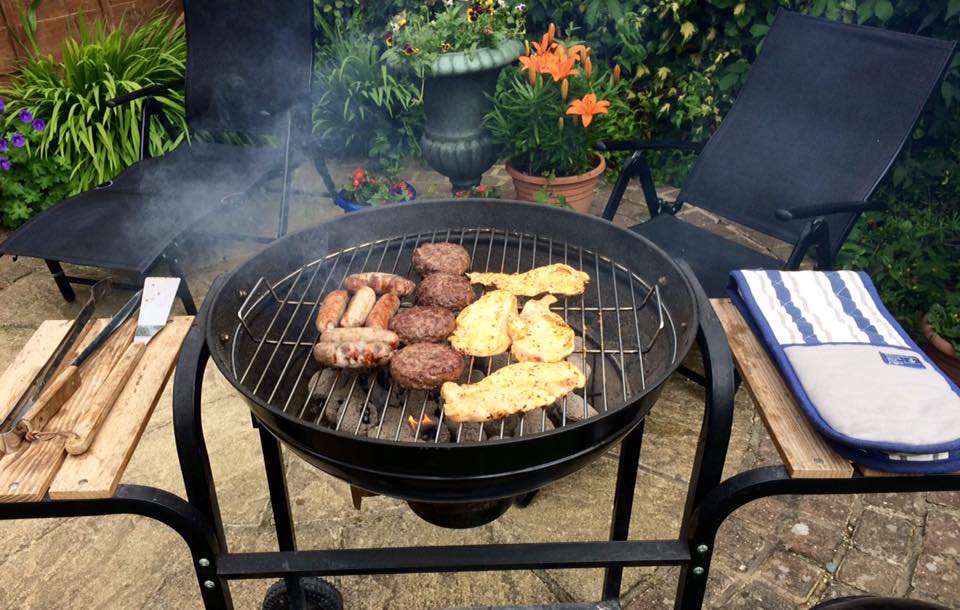 The weather wasn’t ideal for cooking alfresco. The stiff breeze ensuring my grilling experience included being subject to explosions of pollen from lilly, dianthus, orange blossom, pyracantha and the fading aquilegia. Thankfully, I don’t suffer from hay fever or I’d have spent 15-20 minutes sneezing over the barbequing sausages, burgers and chicken. A marinade accompaniment to the grilled fare unwelcomed by us all.

Just over fifteen minutes after I put the food on the grill, it was cooked to perfection. The burger I dropped on the floor had a couple of ants on it, but I was confident it wouldn’t harm Jonny, and most importantly I was sure he wouldn’t notice!

We sat down indoors to eat, our plans for outdoor dining ruined by the wind, ants and pollen. Over food, the four of us exchanged updates on our current existences. The affianced couple told of ventures during their week off, Karen at her happiness to have some people to talk with who weren’t chuffing nuts; while I told Jonny of a distant acquaintance of ours who’d recently died due to an algorithm.

“Do you not mean aneurism, dad?” my son queried.

“No algorithm…… He got hit by a car while pondering over a math problem!”

For some reason Jonny and Jenny seemed keen to leave after that anecdote. Telling of the requirement to dash home to feed Lottie (their cat), having lots to prepare before returning to work tomorrow and not wanting to listen to anymore crap jokes.

In spite of the weathers best efforts at spoiling it, the birthday barbeque for Karen was a great success. She got to see her family, eat well, along with receiving many presents, cards and good wishes.

She also got the opportunity to ask me “I didn’t know you had an old friend who died of an algorithm!…. Did you go to the funeral?”