Yesterday, I was saddened to hear of the passing of veteran entertainer Sir Bruce Forsyth. Although not an avid viewer of his ITV game shows from the 1980’s onwards, in the 1970’s his show The Generation Game joined the likes of Morecambe & Wise, Mike Yarwood, The Two Ronnies and Kojak, in making my childhood Saturday night TV a delight.

For the uninitiated, a catchphrase is a kitsch accompaniment to an entertainers act, many of which don’t stand the test of time. An example being my wife Karen’s of “Would you empty the dishwasher, Gary?”…… Actually, that’s a poor analogy as she isn’t an entertainer and her locutions are more of an order than a catchphrase!

Sir Brucie’s signature sentences, though, were always taken to the viewers hearts…… Apart from his later one on Strictly Come Dancing of “Would you empty the dishwasher, Gary?” which failed to catch on with Saturday night audiences.

On hearing of his death yesterday, I posted the following comment on my Facebook timeline:- Sorry to hear of the passing of Sir Brucie at 89…. Spent many an hour watching him on The Generation Game as a kid in the 1970’s…….. Is it wrong of me to think that the first words he’ll hear from Peter at the Pearly Gates will be “Nice to see you. To see you…..Nice!”??!

To clarify, my social media quip was proffered without disparaging intent. I’d like to think if there’s internet access where the knight of the realm now resides, he’d approve of the gentle comedic nature of the gag……. Although with not having Brucie as a Facebook friend (he refused to accept my friend request), I suspect the late funny man wouldn’t see it anyway. 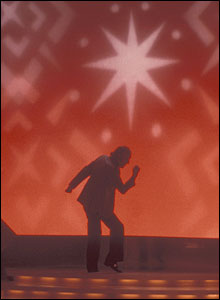 I wrote a fictional draft book a few years back about the ‘goings on’ in offices of a Samaritans-like emotional support group. I thought the subject matter gave scope to add both comedic and dark scenarios which, if written well, can be great literary bedfellows.

In the book, I gave one of the voluntary workers an adapted version of Brucie’s catchphrase. On answering the phone to an emotionally disturbed caller he’d greet them with “Nice to hear from you. To hear from you….”; expecting the stunned caller to respond “Nice!” in return.

This support worker meant no harm; he was just a quirky guy with a misguided belief greeting a caller chirpily would put them at ease…… It didn’t!

Back in the 1970’s, our clan knew from the early seconds of The Generation Game, when the camera captured Brucie’s profile, we’d spend the next hour in the company of laughter, catchphrases and families being teased by the genial host.

Saturday night wouldn’t have been Saturday night without show hostess Anthea Redfearn giving us a twirl, Bruce requesting to “Have a look of the old scoreboard.” or our family shouting conveyor belt contents to a winning contestant whose memory had ‘gone blank’ (apart from remembering the cuddly toy).

Sitting at the fireside of our Low Fell semi my brood and I would feast upon a cheese on toast supper accompanied by a glass of Alpine pop (although my dad probably had something stronger). Even now, the smell of melted Red Leicester on toasted bread can take me back 40 odd years to that Saturday night comfort blanket of warmth, laughter and looking at the old scoreboard.