This afternoon I will spend three hours in situ at a local store in possession of a large bucket in my right hand (or maybe my left… I’ve not decided yet). The objective of this marathon receptacle hold to collect donations for MacMillan Cancer Support.

That being said, if the store roof where I’m volunteering isn’t sufficiently robust, following the rainstorm we’ve just had in East Leeds they may require the bucket for collecting dripping rainwater.

I’ve previously undertaken around a score of these collections, both for MacMillan and the Marie Curie charity. I’ve written narratives about these voluntary work experiences, which if you’ve not read them are filed under the ‘Shameful Attention Seeking’ folder on writesaidfred.org .

The consumer’s benevolence during the collections never fails to amaze me……. Apart from perhaps Consumer Benevolence Week in January, when I expected it!.

Regardless of demographic scores of shoppers always find it in their heart to dig deep. Without fail, kind benefactors ensure these events see a hearty replenishment of the bucket…… Mercifully with currency of the realm, not rainwater.

Although I don’t seek kudos for my voluntary undertaking, I was flattered to hear my wife’s mum say “That’s good!” when advised I carry out this type of work. To have someone with her humanity and thoughtfulness judge my charitable efforts so positively meant an awful lot.

Visiting their daughter Karen only once in six years since her diagnosis of incurable cancer, her fragrant parent’s support during this family rollercoaster ride has been invaluable.

As I try see the good in people, I’m sure that there is a perfectly acceptable explanation behind their reticence to travel the 90 miles…… A lack of money perhaps?…… I don’t know the reason, but if it is paucity of funds it sure as hell isn’t the result of buying Karen a bunch of flowers!!

Anyway, thankfully not everyone has their lack of humanity, so ordinarily these collection campaigns see MacMillan Cancer Support receive worthy financial backing. 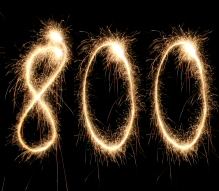 Changing the topic, this narrative is the 800th I’ve penned since commencing my literary project in March 2015. It’s been quite a journey during which time the following stats been captured on my laptop app ‘Wildly Inaccurate Statistics & Omelette Recipes’:-

4 billion man-hours have been spent writing

2 million bags of Haribos eaten during my literary efforts.

The water equivalent of Loch Lomond drank during writing.

9000 toilet breaks; mainly because of all the chuffing water I was drinking!

Yorkshire Water regularly inspecting for leaks in the area as a result of all the toilet flushing I’m undertaking.

75 words made up in an attempt to enhance a narrative; one of which the lexilogical masterpiece Crumeruberdoo.

On 452 occasions I’ve told my wife I’ll buy her a budgie when my book goes global.

On 452 occasions my wife has told me she doesn’t want a chuffing budgie, even if I do bloody teach it to say Crumeruberdoo.

On 452 occasions my wife has asked me “What the chuff does Crumeruberdoo mean?!”

Too often to record, my mum has classed my literary work as “A right load of bollocks!”

On 93 times I’ve aired my dirty washing in public.

On 93 occasions I’ve vowed to buy a new washing machine, concluding the old one wasn’t fit for purpose.

My book is yet to go global…… Or indeed local!