After having problems saying the word ignominy this morning, I reflected on how the brain can mischievously play tricks when relaying verbal communications.

How can it be that I can pronounce juxtaposition and clearothical with ease, but my diction wanders off for coffee when I need it to articulate ignominy?……. Incidentally, the word clearothical doesn’t exist, I merely wanted to point out I can enunciate it regardless.

I’m not the only one who appears to suffer from sporadic lexilogical brain-freeze. A close acquaintance recently informed me that they had secured tickets to see John Legen in concert in September.

This isn’t a John Legend tribute act, she just can’t pronounce the ‘d’ at the end of John Legend’s surname. A quirk made even stranger by the fact she had no issues at all pronouncing the ‘Legend’s set’ at Glastonbury, during a discussion about Barry Gibb’s recent performance at the festival.

So it appears her mischievous brain only decrees she cannot say the word ‘legend’ correctly when prefixed with the word John!!….. To further cloud this speech idiosyncrasy, she calls the store Matalan by the moniker of Mataland, ie has no trouble adding a ‘d’ suffix to a word that doesn’t even possess one!

Words eh!…. You can’t live with ’em and you can’t play scrabble without them. 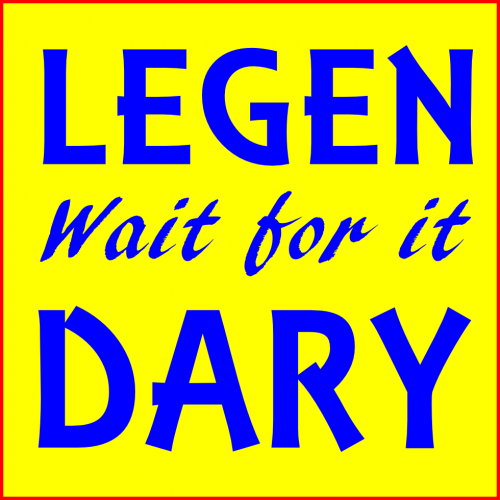 I’ve always been fond of manipulating words, a result of not being good with girls and that I found ‘tongue in cheek’ putdowns were a good defence mechanism. Well, unless used against Frankie ‘Don’t Take The Piss Out Of Me Or I’ll Kill You, Even If It Is Your Defence Mechanism.’ Treadmore, when they could backfire badly.

Frankie was a large, disruptive member of my class at comprehensive school in Gateshead. What he didn’t know about Geography, Maths, English, History or just about any other subject was quite a lot.

A hard-fisted lad from Bensham, his fights didn’t last long, sometimes not even starting, due to him intimidating opponents/victims by telling their fortunes pre-fight. Sat in front of a crystal ball in a fortune-tellers tent, he’d demand his opponent cross his palm with silver (well his dinner money!) prior to telling them “I foresee you having the sh!t kicked out of you in the very near future.”

Frankie may have been an odious bully but, you had to give him kudos for his fortune-telling skills. His predictions were always unerringly correct…… Apart from the day, unbeknown to him, the class clown swapped his crystal ball for a snow globe. Following which, he wrongly predicted to his opponent would need a sled to get to hospital after he’d beaten him.

It’s thirty years since I’ve live in Gateshead (the town where I was educated/raised). Unable to resist the bright lights of London, and more significantly a better wage, I was lured south in 1987. Twenty one years ago I returned to the place of my birth and family roots, Leeds.

Despite not living in Gateshead for a very long time, I’m told by friends up there that Frankie is now making a modest living as a soothsayer…… He sits outside a hostel for the homeless on Durham Road greeting passers-by with the word sooth.

To be honest, Frankie ‘Don’t Take The Piss Out Of Me Or I’ll Kill You, Even If It Is Your Defence Mechanism’ Treadmore was generally ok with me and I bear him no ill-will.

The way I view his situation is, like this morning when I attempted to say ignominy, the big man was merely misunderstood.