I ventured to a wondrous place this afternoon. In the company of my wife and mon mater we journeyed to a domain where there was a santa’s grotto, a plethora of garden lighting consumables, more pot pours than the Frank Edward’s Pot Pourri Emporium and bejewelled gardening gloves fit for Liberace……. Well they would be if he liked horticulture and, more importantly, hadn’t passed away decades ago.

As we meandered around this place of fake snow, bejewelled merchandise, exotic scents, more light bulbs than Blackpool Illuminations and tins of Edinburgh shortbread, it felt like we’d been transported to Narnia.

Of course, we weren’t in the mythical domicile from the fictional tome ‘The Lion, The Witch & The Wardrobe’; however the West Yorkshire garden centre where we were in situ evoked an ambience of enchantment not ordinarily experienced in our everyday existence.

That is unless you live in the town of Birtley in County Durham; a northern utopia mentioned in the Doomsday Book. A suburban oasis with it’s nine hole golf course, swimming pool designed by the inventor of Mr Dog canine sustenance and home to a man who “nars we t’ spraggett his sproggett.”

If truth be told, our sojourn today only had one similarity to C.S. Lewis’ children’s book. That being the fact our SatNav (GPS) took us via a wardrobe; although this piece of wooden furniture resided in my mum’s spare room, not Lewis’ make belief chamber……. On reflection, I perhaps I should have taken more notice of my kids who often complained of lion roars overnight whenever they slept in this room as youngsters.

Even though we’ve anecdotally had tales of lion roars, along with the cast iron certainty of the wardrobes existence, I have to admit we never saw a witch. She tended to make an appearance at the kid’s other grandma’s house.

At the garden centre I was disappointed that the santa’s grotto hadn’t yet been completed. Consequentially, I never got to meet the bearded fat bloke with the red face…… Well not until I cast sight of my reflection in the mirror of the gents toilets.

My disappointment at not seeing the great man in red was exacerbated after this morning witnessing a gift advertised online in a magazine. This made such an impression on me that, after becoming aware of it’s existence, it shot to the top of my bucket list of yuletide gift desires.

Some may deem the ownership aspiration of the item below as tacky. A misguided impulse purchase from yours truly, which I’d regret as much as I did when I purchased ‘Carry On’ movie mugs from Price Drop TV in 2008.

Personally, though, I feel this item announces you’ve arrived amongst the chattering classes. Middle class liberal demi-gods who successfully shape our lives, while sitting job judgemental to ensure we don’t stray from the path of having conflicting ideas. Not to mention refusing to countenance ornaments bereft of delicious cookies.

I know the previous paragraph was pretentious bollocks on my part. However, I would genuinely love to own an ornament that boasted a bourbon tribute to Stonehenge. 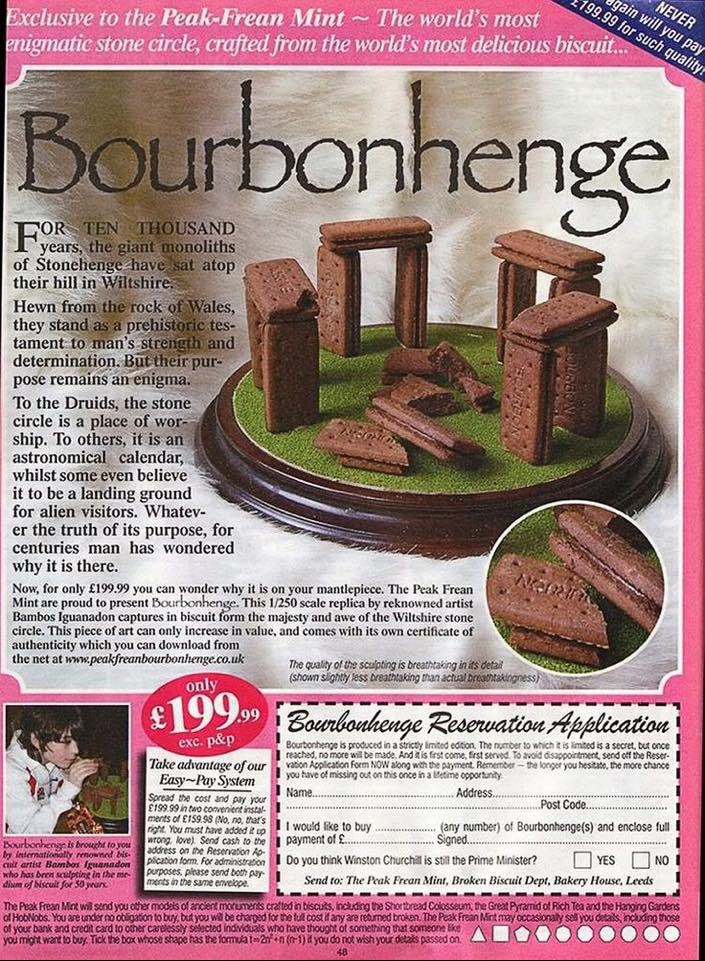