This morning, as we drove back from the White Rose Shopping Centre to my mater’s abode, we passed the Big Top marque of a travelling circus. Witnessing this huge canvas structure, on the periphery of her village, led to an exchange of views between Mrs Strachan senior and myself about the merits, or otherwise of a circuses entertainment value.

The discussion was instigated by my mum jokingly (I think) enquiring “Do you want me to get you a ticket?” Leading to an unnecessarily terse response from yours truly of “Do I bollocks!…. I hate circuses; even when I was a kid I didn’t enjoy them.”

My mum concurred with my thoughts, proffering “Clowns used to frighten the bleeding life out of me!” …….. A revelation resulting in a conversation between the two of us, of which I paraphrase below:-

Me (puzzled) – “If you didn’t like going to the circus, why did you take us to watch them when we were kids? …….. We (my siblings and I) were never overly keen on this type of entertainment.”

Mum (defensively) – “Your dad and I thought the three of you loved the flying trapeze, wrestling hedgehogs and hilarious clowns.”

Me (disparagingly) – “You’re joking aren’t you!…. None of it entertained me at all….. And our Ian went off circuses after receiving severe palm injuries juggling a couple of stray wrestling hedgehogs.”

Mum (in matter of fact fashion) – “I admit you never looked enamoured when we visited the Big Top. However, you were always a miserable bleeder so I never suspected this was a consequence of attending a circus…… Incidentally, Ian’s dislike had nothing to do with his hedgehog injuries. He lost interest one year after your dad refused to let him put his head in a lion’s mouth. His key life aspiration after seeing it performed by the lion tamer.

Me (smiling at the memory) – “I’d forgotten that. Our Ian wasn’t happy at dad’s intransigence and wanted to ring child care authorities…… If our kid hadn’t been persuaded otherwise, dad would have become the only person in history reported to social services for not allowing his child to place himself in danger!” 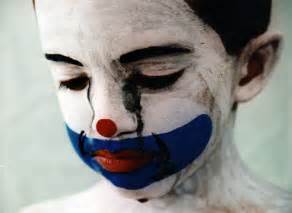 Mum – “Did the clowns frighten you like they did me, Gary?”

Me – “Not really…. I didn’t like them because they weren’t funny!”

Mum – “What, even Charlie Cairoli in the 1970’s at Blackpool Tower circus? All the kids used to love Charlie!”

Me – “I respect everyone’s right to choose who and what they find entertaining. However, Charlie Cairoli made me laugh about as much as the other famous moustachioed 20th century entertainer with the moniker of Charlie C…….. Which wasn’t a lot.”

Mum – “I thought you loved Charlie Cheesecake the Deckham Balloon Sculptor. Especially after he made you that air filled sculpture of a dalek playing tennis, at Cromer Avenue church.”

Me – “That wasn’t a dalek playing tennis, mum. It was a wigwam swatting flies!”

Mum – “Well he must be a bleeding idiot! Who the hell’s heard of a wigwam swatting flies?!”

Me – “I can’t argue with that……. Although, I would add it’s no more unlikely to occur than a dalek playing tennis!”

At this point we arrived back at her house, where she rushed indoors with a mischievous threat to book tickets for the circus. Meanwhile, I emptied the car of her weekly food shop in the teaming rain, consequentially getting wetter than a victim of a clown’s flower.