Tomorrow it’ll be 29 years since I walked down the aisle of a County Durham church with my new wife. To mark the occasion, I thought I’d pen a few memories from that unforgettable service of betrothal. which I recollect as follows:-

On this sunny September morn, my Best Man (my brother Ian) and I arrived slightly late at the church. Both of us relieved to hear our poor punctuality hadn’t resulted in my bride-to-be beating us to the church.

Our Ian’s chronic earwax problem meant he didn’t hear his alarm go off. I stupidly hadn’t set mine as a contingency; whereas our parents had been too busy interviewing a lodger for my soon to be vacated room to wake us. Consequently we overslept, resulting in a mad fight for the bathroom when we came to dress..

Once we were ready, my sibling and I we took the short journey to the church, arriving 5 minutes late. I parked the car and we proceeded to walk up the gravel path towards the imposing church doors. Ian pointed out the path had seen better days. He was right and I mused one of them was probably the previous Saturdays wedding.

Donned in light grey top hat and tails, we increased our walking pace to make up lost time, by-passing weathered gravity defying grave stones, tilting as if bowing to royalty. On the fences either side of the path, a group of larks perched bestowing Ian and I with a guard of honour. To this day, I’m sure I heard one of the larks tell a feathered acquaintance “I’ll give it six months!”

Once inside the church, my pre-service apprehension wasn’t helped by the organist playing the musical score from the movie The Omen. Edging closer to the vicar, this angst was further fuelled witnessing a woman perched on a pew with a ‘Kill The Heretic’ placard.

Near the front of the church, I also caught sight of my mother-in-law to be. Avril is the nicest person you could ever meet; if you never met any other person on the globe. I gave her a disingenuous smile and it suddenly dawned on me why The Omen score was being played.

The vicar was an eccentric man who, due to his infatuation with the musical Starlight Express, wore roller skates when undertaking his services. It has to be said his quirkiness seemed to unsettle the congregation, although I was unfazed by this eccentricity. I was just relieved it wasn’t The Lion King musical he was obsessed with!

Looking down the aisle toward the altar, I witnessed the clergyman fighting valiantly to keep his balance as his skates appeared to have taken on a life of their own.

The fact our Ian was procrastinating by pausing to chat with assembled guests seemed to irritate the vicar…….. That wasn’t a surprise, though, because he was doing my bloody head in as well!

My brother’s soundbites included “Our Gary’s cacking himself!”, “Sorry we are late. We were held up by Sioux Indian’s on Birtley High Street!” and “Do you know the difference between a penis and a chicken leg? ….. If not, do you want to come on a picnic?!”

The women he said it to laughed nervously at Ian’s joke. However, the vicar wasn’t impressed with his wife being subjected to such an inappropriate question – joke or no joke.

When we finally reached the vicar, I apologised for our tardiness. He smiled back and replied “No worries. By the way, have you ever seen Starlight Express?” I gave a nervous laugh, shook my head, smiled and went back to sweating. Our Ian looked on vacantly for a few seconds before responding “I’ve never read it your majesty!”. I assumed at the time he thought Starlight Express was an astrological newspaper, I’ll have to ask him one day.

When the guests were finally settled on their pews, the organist struck up ‘Here comes the Bride’ causing me to turn my head and look toward the rear of the church.

In my line of sight a veiled shadow of white swept majestically down the aisle towards me. My heart skipped a beat, and there was dryness of mouth at this wondrous spectacle. It was a feeling that only lasted fleetingly, however, as when this vision reached me it turned out not to be Karen, but a neighbouring beekeeper in full regalia. 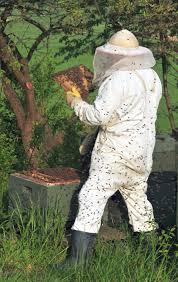 He had dashed in to advise the vicar that Karen maybe a little late due to his bees violently attacking her dad George at the gates of the church. A consequence of him wearing a lucky honeycomb on his head for the occasion.

Several minutes passed, but after a stiff whisky, and having his wounds attended to, George was ready to proceed and the service commenced.

Following the bee attack, the service went off without incident. That being said, I am convinced we’d chosen hymns for the service, not the medley of songs from Starlight Express, which had mysteriously appeared on the order of service sheet since last night’s wedding rehearsal.

As the service came towards it’s conclusion, Karen and I were pronounced man and wife. After signing the register, we proceeded back down the aisle to stand for the traditional photos outside, whilst striving manfully to avoid being blindsided by the out of control clergyman on skates.

Outside the photographer asked Karen and I if there was anywhere picturesque we’d like our official wedding photos taken. When your wedding is in Birtley a question like that is a bit of a conundrum as aesthetically pleasing views are of a premium in this featureless north east town.

After much debate our photographic memories of the day were captured outside of the Komatsu construction machinery factory. It won the accolade after beating Bimbi’s chip shop and Birtley baths in a game of paper, scissors and stone.

As we waited to be gathered together in the group photos, our Ian amused himself by throwing his top hat in the air to try land it on his head. I watched on intrigued by this game, wishing I could join him instead of making small talk about fork lifts with people I didn’t know from the Komatsu factory.

Once the photographs were finally completed, we headed towards the cars for an onward journey to the Red Lion in Chester-le-Street for the wedding reception.

As I climbed into the wedding car to join Karen, I loudly announced to my brother, who was alighting another car, “I’ll see you at the Red Lion, Ian!” He smiled back at me, winked and shouted back “No you wont! I’m off on a picnic!”

Occasionally during a quiet period, I sit meandering through our official wedding photographs, stirring a few memories from that memorable day in 1988. I’d look at them more but for some reason visually scanning these pictures gives me terrible gout.

On a recent viewing I flipped through the albums pages with a heart-warming glow. It evoked memories of happiness, thoughts of two families bonding and the mystery of who the hell was wearing a Komatsu uniform in the family group photo!