Yesterday I wrote of a fictional eponymous character I’d been developing for a yet unwritten yarn with a working title of Hilda Chinwag.

A gossip laden harridan, Miss Chinwag revels in her self-appointed role of peoples champion in the picturesque village of Ainsley Scragg. Her daily remit is to right wrongs, as well as concealing herself in villager’s refrigerators with a view to glean juicy secrets and eat their Mr Men yoghurts.

A quintessential spinster, when she’s not hiding in fridges, she ventures the lanes of Ainsley Scragg on her mobility scooter. Her role to check for crimes such as leaving hedges unkempt, dog dirt misdemeanours and tractors causing an obstruction to the main village thoroughfare.

Anyone who breaches her self-imposed code of decency is initially given a verbal warning. Although she deems this as well-meaning  ordinarily she receives a curt response from the ‘guilty’ Ainsley Scraggian, such as “Go shove your verbal warning up your arse!” or “Did you know there’s dog dirt on your scooter wheel?”

Anyway, after a positive response to Saturday’s Hilda Chinwag blog, I’ve decided to tell of another character who is currently residing in my cranial corridor named creative.

Mr Clack is one of weather forecasters on a low budget cable TV channel. The channel, which is financed by the souls of the oppressed, is called Perchy and it ‘entertains’ viewers with shows like phone-ins from beyond the grave, re-runs of old music hall shows and Pathe news bulletins from the 1950’s.

At the conclusion of the Pathe news, which last night told of a current problems in Suez and the theft of MP Harold Wilson’s budgie, Clackity’s forecasts grace the screens of his adoring viewers.

Clackity Clack’s pieces are filmed outside on the roof of the building where Perchy’s studios reside. This Grade 2 listed building resembles Norman Bates house in Hitchcock’s movie Psycho; with the notable addition of an illuminous Perchy sign above the weathered entrance door.

The weatherman’s forecasts to camera consist of him licking his index finger and raising it in triumphant fashion above his head. On returning his hand to it’s normal position (his wife’s purse), he informs the viewing hordes what the meteorological gods have in store for them over the next 24 hours.

“It’s gonna p**s it down!”, “Get that bikini line sorted, you’ll be in your cossy later!” and “It’ll be as blustery as a bean troughing horse’s this evening!”, just sample of the brash, misogynistic predictions proffered by the charlatan meteorologist. 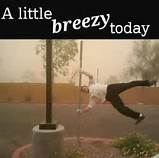 His bawdy forecasts often rankle with studio bosses who’d love to rid themselves of his disruptive influence. However, as his daily evening pieces get the best viewing figures on Perchy, sponsors insist he stays put.

In fact, the channels benefactors attempted to pressurise station bosses into utilising Clack as host of the nightly phone-in from beyond the grave. A request that the weatherman dismissed out of hand, using his extensive vocabulary to tell bosses “Bollocks to that!”

Whether Clickity Clack and Hilda Chinwag ever become more than just vague epiphanies in my capricious mind remains to be seen. Anyway, I’ll conclude this ramble now as I want to go watch Pathe news to see what’s kicking off in Suez.