As I’m finding penning a daily blog of 500 words minimum is starting to make my head hurt, I was going to take a break from writing today.

A consideration added to by news from my solicitors the Lenovo Ideapad, on which I ply my lexilogical trade, is threatening litigation. Apparently, this the result of it’s cumulative weekly hours worked breaching European Union employment legislation.

When I said ply my lexilogical trade, that isn’t strictly true as writing isn’t my paid employment. My literary journey is merely a vehicle of distraction from the everyday enduring challenges in l’existence de Gary Strachan. This desire to be a wordsmith also partly fuelled by mid-life crisis, not to mention needing to offload a myriad of offbeat ideas that have frequented my neurological corridors for far too long.

At some point I’d love to be remunerated for a piece I’d created, however now isn’t the time. Until that day arrives, my Co Durham solicitors Haddaway & Ballicks will continue monitoring for plagiarism…….. Or at least they will do when they’ve nipped in the bud the threat of employment litigation from my laptop.

My worried daughter Rachel also thinks it would be beneficial to have a break from writing. I was touched that she was so concerned, particularly when you bear in mind she has absolutely no intention of reading them. Respecting her opinion, I asked if she thought one day off would suffice, to which she responded “I was thinking more of an indefinite break, dad!”

Even though my brother Ian can be a bit behind the times, I asked his thoughts with regards to me taking a literary sabbatical. He mulled it over for a few seconds, before responding “Do what you want, Gaz…… Hey, did you know you can buy pizzas now that have melted cheese in their crusts?!”

Rueing engaging our Ian, but now in the possession of an ‘innovative’ pizza recipe, not to mention his thoughts of what a coincidence it was that the guy who invented Dundee Cakes was from Dundee, I sought my wife Karen’s opinion.

“It might be worth you taking a wee break, Gary!” my wife confided, after I asked about having a few days away from my laptop.

“Why’s that Karen? Do I look jaded?” I questioned.

“No, when I said wee break I meant a trip to the toilet. It looks like you’ve peed yourself!” she responded, rolling her eyes in disapproval. 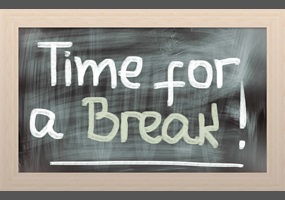 So there you have it; three people’s opinions sought on whether I should have a literary sabbatical, but no further forward because no meaningful guidance was forthcoming in return.

Whether I take a break or not, I do want to enrol at some point on a creative writing course, maybe even finding someone to assist with proof reading my narratives. By someone I mean an individual with a good grasp of grammar, although not necessarily a grasp on reality.

I feel I’m at a point where I require somebody to bounce ideas off if I’m to develop as a penman. What I require is a wingman to guide me through the minefield that is creative writing; a Barry Chuckle to my Paul Chuckle; a Mike & Bernie Winters to my Snorbitz; a flake to my 99 cone……. And lots of other arbitrary similes.

With this in mind, I asked Karen if she knew any parents of a 11th grade kid who’d engaged a private English tutorage. The following exchange ensued:-

“How would I know that?” my spouse responded discourteously.

“Well you know a lot of people around here” I replied, taken aback at her unjustified hostility.

“Yes, but not many parents of 11th grade kids. Our kids are a decade older!” she barked back.

“What about Woody’s mum and dad?” I enquired.

“He was in our Jonny’s class. He’s flipping 27 years old!” came my missus’ disparaging retort.

“He was in our Jonny’s class as well!” Karen snapped back, becoming increasingly irritated.

“I thought that was Chambers senior.” I ventured in return.

“No he’s 23 now. He was in the school year below our Rach!” my agitated wife countered.

“How the chuffing hell can Chambers senior be in a school year three years below Chamber junior?” I queried, completely confused.

“I don’t know!…… I didn’t make up their flipping nicknames!” my wife growled back.

“They’re not nicknames!….. They are their surnames with a junior or senior suffix….. Anyway, why are you being so hostile?!” I barked back.

“Look Gary, I’ve no idea why Chambers junior is older than Chambers senior, I’m also unaware of any private English tutors to help you with your blogs.” she told me, surprisingly attempting to diffuse the situation.

“So you reckon Woody and the Chambers lads won’t know one either, then?” I sheepishly attempted to clarify.

At this my spouse donned her coat in a rage and headed towards the front door in silence….. Well, apart from a few growling noises. As she headed down the path I shouted after her:-