This evening Scots around the world will mark the birthday of 18th century Scottish poet and lyricist Rabbie (Robert) Burns.

As part of these global Burns Night celebrations there will be feasting on haggis, neeps and tatties, while drinking a wee dram to toast the national poet of Scotland. In some cases, a recital of the Bard of Argylle’s poetry will make a perennial appearance.

I don’t recall ever celebrating Burns Night in adulthood. However, as a lad growing up in the north east of England, we would generally celebrate Burns Night with a Scottish couple (Jimmy & Moira) and their daughters, who lived across the street.

I never asked my dad, but I assumed we participated in this celebration of the Bard of Argylle due to Scottish roots, not to mention our surname originating from the Aberdeenshire village of Strachan.

I don’t recollect a great deal about these evenings, other than tasting haggis for the first time and, much to my mum’s chagrin, belching repeatedly after imbibing too much Irn Bru.

A drink the adverts told us was ‘Made in Scotland from girders’, Irn Bru was my favourite childhood drink with the word iron misspelled within its moniker.

A perfectly palatable, if not very gassy, soda drink that made a refreshing alternative to the bottles of Alpine’s Dandelion & Burdock delivered by the pop man during his Friday afternoon sojourns to Low Fell.

It certainly made me belch more than Alpine’s Dandelion & Burdock. 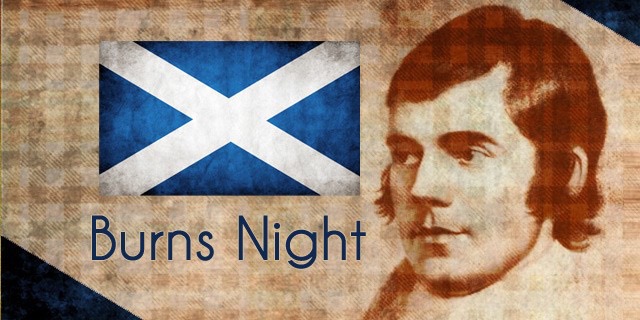 Haggis was a strange bed fellow. As a kid I was initially put off by it aesthetically displeasing appearance and a lack of clarity as to what I was actually eating.

However, after I’d reluctantly jemmied the first forkful into my mouth during a childhood Burns Night celebration, I realised it tasted like a dry, heavily spiced sausage meat. Being a fan of sausage meat, I never had a problem with it following that experience.

Our Scottish neighbour Jimmy was a short affable guy from Kirkcaldy, who laughed like Barney Rubble and looked a bit like Doberman. To clarify, that’s Private Doberman from the 1950’s US comedy Bilko. He didn’t resemble a menacing black, long limbed canine!

If I recall correctly he hedged his bets with the football teams he supported by following Raith Rovers, Rangers and Newcastle United. Thankfully, he was a better host than he was at picking football teams.

He was never short of a humorous yarn, wise crack and drink of Irn Bru. By the way, the Irn Bru was for the kids. If it had have been served to the adults I suspect their take on his hosting skills wouldn’t have been as complimentary as mine.

It’s got to be said that after a few beers or whiskies Jimmy stories weren’t that easy to comprehend. It was a case of just nodding and smiling at them after he’d reached a certain level of inebriation……. In this state of acquiesce, I just had to hope he wasn’t saying something like “Can I give you a Chinese Burn or Donkey Bite?”

Our affable neighbour’s wife Moira resembled Scottish actress Geraldine McEwan, of Miss Marple and Prime of Miss Jean Brodie fame. She also spoke in the same soft Scottish lilt as Ms McEwan. Even when she scolded Jimmy for being out late with Fred Flintstone and Sgt Bilko it would be delivered in a quiet, calm and collected manner.

At the time, I’d never seen anyone berate people in such a soft and calming manner and I don’t think I have to this day. My mum was a warm, loving and caring person, however, her rollockings could be off the Sphincter scale at times.

The sphincter scale is like the Richter scale, only it doesn’t measure earth tremors it captures tremors of an altogether different nature!

Although, I struggle to recall many elements of those Burns Nights with our Scottish neighbours, I still recollect them with fondness. Without hesitation,  I include them in the good times section on my life’s tapestry.

Bearing in mind Burns Night is predominantly a celebration aimed at an adult demographic, I look at it that they must have been good nights for me to have fond recollection of the occasions.

To the uninitiated, the name Mr Burns will bring to mind a frail, spiteful old man in the Fox TV animation The Simpsons.

As much as I laugh at the exploits of Homer and his family, I suspect two hundred years from now Burns Night will still be Rabbie’s day. An occasion where Scots and people of Scottish descent congregate to toast the man who wrote, among many other literally important pieces, ‘Auld Lang’s Syne’.

To close, I include the final verse of ‘To A Louse’, a poem by the Bard of Argylle. The full prose tells of a louse that resides on the bonnet of an upper class lady in kerk.

An online critique of the poem states “The poet chastises the louse for not realising how important his host is, and then reflects that, to a louse, we are all equal prey, and that we would be disabused of our pretensions if we were to see ourselves through each other’s eyes.”

Have a great Burns Night all, particularly everyone in clan Strachan.

O wad some Pow’r the giftie gie us

To see oursels as others see us!

It wad frae monie a blunder free us An’ foolish notion:

What airs in dress an’ gait wad lea’e us, And ev’n Devotion