I’m back in West Yorkshire after a salubrious break at the charming Raithwaite Country Retreat in Whitby.

An early birthday treat courtesy of my little Durham born missus, this hideaway location provided a tranquillity within my soul that I’d not experienced for a long time.

From the affable concierge’s greeting on arrival to the au revoir from a different, but equally affable, concierge we received excellent customer service, top quality food and ambience of serenity I’ve rarely previously encountered.

Getting me to that state of calm when I live on a daily basis with my wife’s incurable illness, being a Leeds United fan for 47 years and the recent manifestation of middle age cynicism, was some achievement I can tell you.

Thankfully, though, we mentally left Karen’s unwanted visitor at home. Additionally, our sojourn temporarily purged my mind of Leeds dropping out of the Championship play-off places, along with an unusual acceptance of my rapidly spreading paunch.

In fact, the only drama we encountered was Karen mislaying her scarf. This an oversight while relaxing in the manicured hyacinth fragranced gardens.

Her scarf was handed into reception so it remained a first world problem. A minor incident that didn’t quite reaching the domestic trauma levels of a 1960’s Ken Loach kitchen sink drama.

The hyacinth bouquet of the gardens would no doubt have been approved of by social climber Hyacinth Bucket (pronounced bouquet) in BBC comedy Keeping Up Appearances.

Not forgetting the bragging rights over her long-suffering neighbours after attending this upmarket location…….. Not that we met anyone at the retreat who displayed a modicum of Mrs Bucket’s overt snobbery! 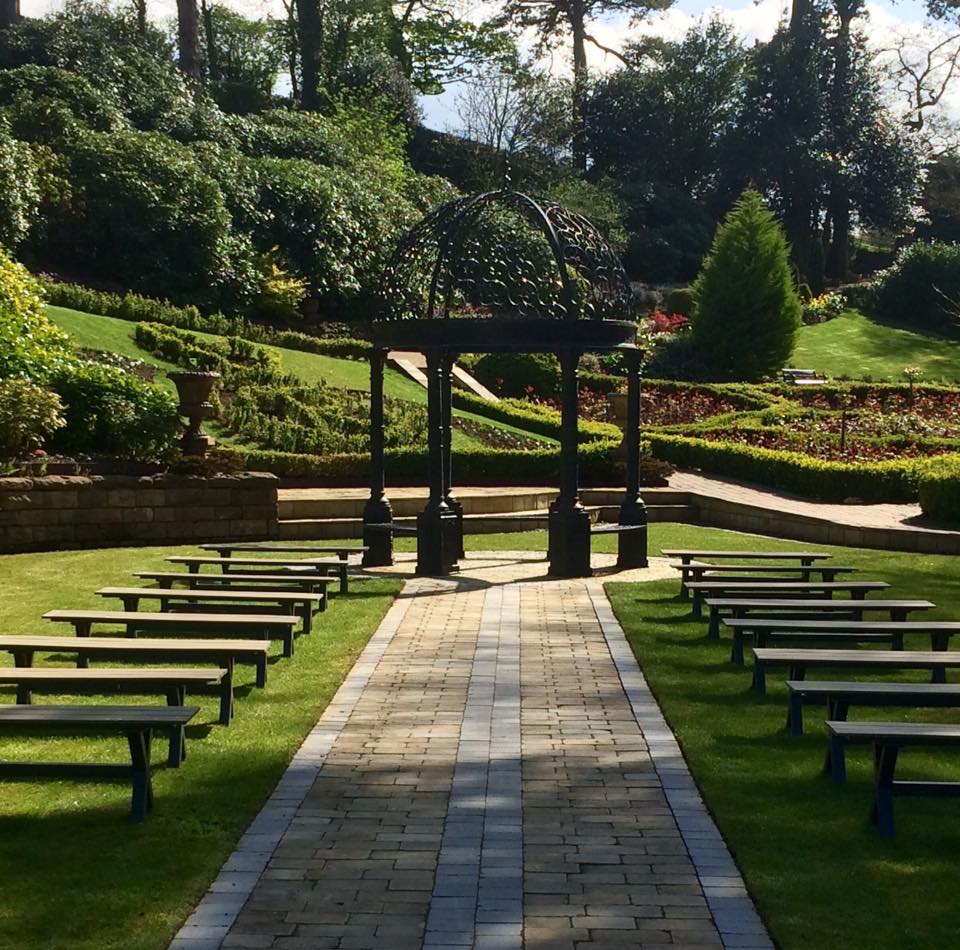 As I said above, on arrival a concierge greeted us in the reception car park to assist with our luggage, along with providing an overview of the hotel’s facilities. After a painless check-in process we were guided to our executive bedroom.

It was a pleasing chamber, although I wasn’t happy we were having to share it with an executive. Seriously, though, it was a splendid room, that apparently was built by the Normans…… The bathroom tiling was undertaken by Norman Greaves from nearby Staithes, while the decorating had been carried out by Norman Clambourne from Seamer.

As the concierge left our room, he asked if I wanted him to park our car in the main retreat car park. I jokingly responded that I’d do it, as I was concerned he may steal my Carpenters – Greatest Hits cd if I gave him the car keys. Thankfully, he had a sense of humour and laughed at my lukewarm gag. I’d have hated to think he genuinely thought I was accusing him of being untrustworthy.

On the Thursday evening we ate in a building detached from the main hotel named the Keep. This building with it’s glass skylight and agreeable décor also boasted guest rooms, in addition to its restaurant/bar.

Sitting in the restaurant awaiting our Starters, Karen eloquently waxed lyrical about our temporary domicile. Dressed in her blue dress that was woven by silkworms in her mother’s loft, she bestowed upon me an erudite monologue about the hotels contemporarily designed décor.

It wasn’t meant to be a monologue, however it unexpectedly morphed into one when I realised I couldn’t get a flipping word in edgeways!

She also articulated how impressed she was with the ‘can do’ service received from our hosts staff; also mentioning what a good job the two Norman’s had done in the construction of our bedroom.

After dining on a splendid meal of soup and sea bass, the cheese board and fruit crumble, we bode the Keep farewell and embarked on the short stroll back to the main hotel.

As I drove the 90 minute journey back home to Leeds yesterday, I gave an inner smile as my mind turned to thoughts of how thoroughly I’d enjoyed this deluxe stay………. I also wondered where the heck my Carpenters – Greatest Hits cd had gone!