The chapter of my life between 1988-1992 has featured heavily in my narratives this week. Memories predominantly evoked by a recent witnessing of a new movie charting the upturn in Leeds United’s fortunes during that era.

During that same period, an early evening Saturday radio show was born on BBC Radio Five (later to become Five Live). I stumbled across this audio nugget by leaving the radio on at conclusion of Sports Report; the result of being otherwise engaged extinguishing a grill fire that had rendered our tea inedible.

The radio show in question was called 606 and was fronted by a chirpy, motormouth Londoner named Danny Baker. I assume the show got its unusual name from the fact it started at 6.06pm (after the news bulletin)…… I wasn’t inquisitive enough to write to Auntie Beeb to confirm that, but if that isn’t the reason it was a flaming massive coincidence.

Baker wanted to avoid his football phone-in becoming a vehicle for whinging capricious fans, wittering because their team had lost that afternoon. No his agenda was that he, hold onto your breaches, wanted to entertain; encouraging listener calls about off the wall football related experiences.

In particular he wanted calls relaying tales on subjects like ‘A famous footballer they’d met in Sainsburys’ (footballers wives couldn’t ring in), ‘Funny ref stories’ and a mixture of light hearted occurrences during that afternoons game, be that at any level on the football pyramid.

I think in the early shows he also intertwined the calls with classic music tracks, although I may have dreamt that. Saying that, though, I don’t often dream about radio shows so it probably did happen.

However, I can definitively say that I loved the show. I spent many a Saturday evening, buoyed by a Leeds win (which they did regularly back then), while stood in the kitchen with a bottle of San Miguel, cooking tea and frequently guffawing at the anecdotes of this very funny guy and his callers……. Thankfully my teas were ordinarily more edible than my offering above which inadvertently introduced me to 606.

I don’t recall many calls from back then. Although I do recollect a guy ringing to say the ref in the amateur game he’d played in that day had forgotten his whistle. This resulted in the official having to signal an infringement by hitting a spoon onto metal drinks tray, which he’d borrowed from the adjoining club bar.

If memory serves me correct, another guy rang to say he’d hoofed the ball out during his amateur game. Unbeknown to him it hit his watching wife in the face, so he got a surprise when he got home to witness his missus with the resultant shiner.

I don’t know if these stories were true, but it didn’t really matter as they painted gloriously funny images in my then less cynical twentysomething mind. 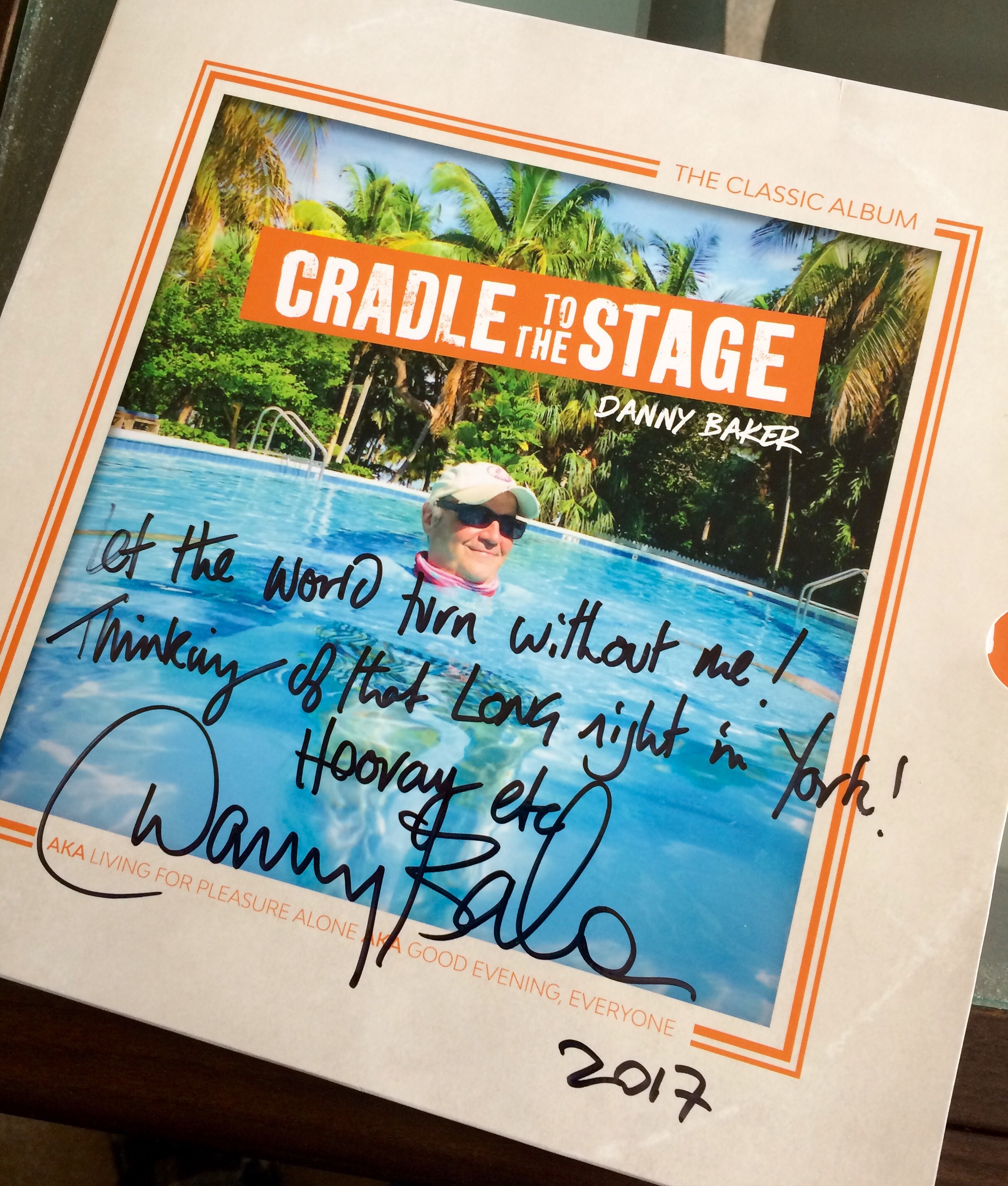 Anyway, the reason I’m rabbiting on about my introduction to the joys of Danny Baker’s broadcasting back in the early 1990s, is yesterday evening I went to see his stage show ‘Cradle to the Stage’ in York.

The show started at 07.30 pm, and for nearly four hours he captivated his audience with joyously humorous anecdotes, predominantly consisting of ripping yarns from his South London upbringing.

I’m not going to regurgitate the tales verbatim, or indeed paraphrase them. His delivery adds so much to the story that I couldn’t do them justice on here. If you want to know them buy his books or catch another of his shows…… If laughter isn’t for you I’d recommend a later 606 presenter David Mellor’s book ‘Mind the Gap’, or I would if it existed.

What I will relay is there were some hilarious tales bestowed upon us, the York theatre goers. They included stories of hand grenades, his uncle Godfrey’s funeral, his dad’s green silk tie with horses on, dangerous bomb site escapades with his mates, getting Marc Bolan’s shirt and his ability to endear himself to even the most prickly of celebrities.

Being born in Deptford, South London, I’m not sure he’d have been able to hear Bow Bells on his arrival in June 1957, so I’m not sure if I can label the writer a cockney. Not unless he had hearing like an old workmate of mine, who claimed his excellent audio pickup due to having “Ears like a hawk.”

A glorious mixing of metaphors, which has stayed with me over 30 years, along with his other classics “He smokes like a fish!” and “I wouldn’t trust him with a barge pole.”

Talking of hearing, we’ve recently got to the bottom of my wife’s mum trouble hearing Karen on the telephone. Apparently, she is still using her non-performant hearing aids as she wants to save her new top of the range set ‘for best’……. So if your not at Birtley golf club on a Saturday night, don’t waste your breath talking to her as she won’t hear you.

Anyway, my wife Karen and I were thoroughly entertained last night by the rapidly delivered spiel from the guy whose been ‘in the business’ for over 40 years. If she’d have been wearing her ‘hearing aid for best’ I’m sure her mum would have loved it too.

After the gig, Karen and I walked the short distance to the riverside car park where I’d parked several hours earlier. We were relieved I’d driven over to Leeds, as our original intention of travelling to York by train would have meant missing the last locomotive home due to Baker’s wealth of tales.

He appeared to enjoy himself so much, there seemed a reluctance to let us go. Like late, great entertainer Al Jolson used to tell his guests ”Just one more song before you go.”, Danny Baker wanted to tell us just one more anecdote.

I was lucky enough to catch Bob Mortimer and Andy Dawson’s Athletico Mince stage show in Leeds a few weeks back. As we approached the motor Karen asked me “Was he (Danny Baker) funnier than Bob Mortimer?”

I answered that their style of humour was very different, as in the Londoner is a skilled raconteur who tales, although sounding far fetched at times, will be true. The portal where Bob Mortimer’s humour resides is a very different place, somewhere surreal where I wish I could also live, but more of an acquired taste for some.

One thing is for sure, though, is they are both truly funny entertainers whose shows were great value.

I may sound overly gushing above, but there are so many comedians who are really not funny, it’s great to savour the material of those to whom making people laugh is second nature.

To close, Danny Baker said there was no underlying message to take from the night, in particular any working-class hero nonsense. His four hours of spiel was an entertainment vehicle, not aimed to bask in the glory of council estate boy done good.

Right, I’m off to see if I can get myself a green silk tie emblazoned with horses.