Yesterday, Huddersfield Town were promoted back to the top tier of English football for the first time in over 40 years. Despite being a fan of their West Yorkshire rivals Leeds United, I have to applaud David Wagner and his side for their unlikely achievement.

Many Leeds fans won’t share my sentiments of congratulation, but I’d like to give credit were it is due to the German coach, who was only 18 months old when Town were last in the top flight

Their promotion yesterday evoked my first memories of football back in 1970. This a time when Huddersfield were last promoted to the top flight. An era where the names of Trevor Cherry, Roy Ellam, Frank Worthington and Jimmy Nicholson were amongst the Town players who, as a 7 year old, adorned my football sticker book of Division One players.

Also amongst the squad of Huddersfield players in the aforementioned book was a player whom I deemed to have the then best name in the top flight. A Welsh international born of Polish parents called Dick Krzywicki.

In the early 1970s the only other foreign sounding players name was Pat Holland, so as a kid I was fascinated by the surname of the man in blue and white stripes. In particular, I wondered how many points it would earn in a game of Scrabble.

I don’t remember much about Krzywicki other than he had a mop of fair head and was the first footballer in my sticker album with a z in his name. Fred Zebra-Crossing wasn’t included in the book because he played in the lower leagues for Newport at the time.

Even though I wasn’t a Terriers fan, I was chuffed to bits the day I opened the pack of cards to find, amongst the other five or so cards was the blonde headed, blue and white shirted Krzywicki.

I couldn’t spell or even say his name at the time, however after getting this football card I was practically fluent in Polish…… Ok then, that’s a bit of an exaggeration, but I did soon learn how to spell Krzywicki. This fact not lost on my primary school teacher who was baffled how I could effortlessly spell Krzywicki, McKenzie, Bonetti and Letheran, but struggled with about, school, cheese and potato.

My childhood love of football taught me many thinks academically. From the names of Leeds United’s European opponents my geography knowledge improved, learning the location of cities such as Budapest, Barcelona, Split, Turin and Milan.

I was aided in the learning of my maths timetables by multiplying the sock tag numbers worn by my heroes in white. I knew if I multiplied Allan Clarke’s sock tag number (8) by Billy Bremner’s (4) the answer was 32. If I divided Johnny Giles number (10) by Paul Reaney (2) you got 5. I also worked out that the square root of Mick Jones was 3.

I learnt key historical dates by knowing England won the footballing World Cup in 1966, when it struck me how lots of memorable events occurred in years ending in 66. From that observation I’ve always remembered the Battle of Hastings was in 1066 and The Great Fire of London took place in 1666.

Looking back, its evident that my thirst for football knowledge in the 1970s subliminally taught me many useful things academically. 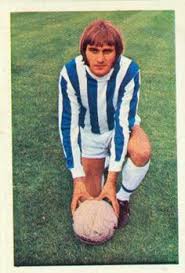 Collecting stickers also taught me the valuable life lesson of you can’t always get what you want. Despite swapping cards with your mates you could always guarantee you’d be a player or two short.

A fact of football sticker science that one year caused me to petulantly lose patience at being unable to secure the card bearing QPR’s Stan Bowles. This resulted in me irrationally placing a swap card of one of his teammates in the gap where Stan should have resided.

Despite my attempts at forensically doctoring of the sticker, my artwork wasn’t as accurate as I would have liked. In hindsight I think using the bald much stockier Terry Mancini as Bowles replacement was flawed, even with blue biro hair. Regardless of this, though, I initially still felt chuffed that I’d managed to ‘fill’ my sticker book.

My fraudulent football sticker improvisation didn’t fool anyone though. Which I found out while showing friends my ‘completed’ album, when it wasn’t long before someone chirped up “You’ve not got the set, Gary….. That’s not Stan Bowles, it’s Terry Mancini with biro hair!”

In the following years album, I got two Stan Bowles and no Terry Mancini’s. So I doctored one of the Stan Bowles cards to ‘look’ like Mancini by providing him with a bald patch of PVA glue.

Nowadays a name like Krzywicki is common place in the financially lucrative Premiership (English top flight). I imagine for collectors these days locating a footballer with a historically common British name is as difficult as I found collecting that of Huddersfield’s Welsh international in 1970.

To conclude this narrative, I wanted to applaud Huddersfield Town on their achievement, along with a message to keep Leeds United a warm seat for our 2018/19 season up there.