The other day I wrote of the ever thinning locks on my pate. I wrote of how it didn’t overly bother me, and I intended to embrace this middle-age affliction with dignity. What I forget to journal was that I’ve definitely ruled out a toupe as a potential solution to this hair-loss.

The main driver behind this decision being the seemingly constant presence of breezy conditions now in the UK, which raises the chances of embarrassment. My brother Ian counters that I should give it a try, keeping the hairpiece in place with a ribbon tied in a bow under my chin. He also opined that owning a toupe could also turn out to be therapeutic, as when I’m not wearing it I could stroke it like a dog, and even take it for walks.

Analysing it though, my brother can’t think donning a wig is a great idea as to my knowledge he’s not worn one during the 20 years he’s been bald. With this in mind, along with the fact his mooted benefits are chuffing ridiculous, I’ll put his epiphany on the back burner.

My sibling claims that loads of celebrities wear hairpieces these days, including ex-swimmer  Duncan Goodhew and children’s entertainers Bodger and Badger. As he’s completely bald, I assume Goodhew’s wig is invisible; as for Bodger I can’t comment either way. Additionally, his cohort Badger is a puppet so I suspect my brother’s information source was either lying or a chuffing idiot; or both!

My kids used to watch Bodger and Badger when they were younger. It was a curious show, starring a man and his mashed potato loving puppet badger.

I have very little recollection of their onscreen antics, other than there was lots of mash potato eating and throwing. However, I do recall on their first viewing of the show an adult family member bizarrely questioning “Which one is Bodger?” 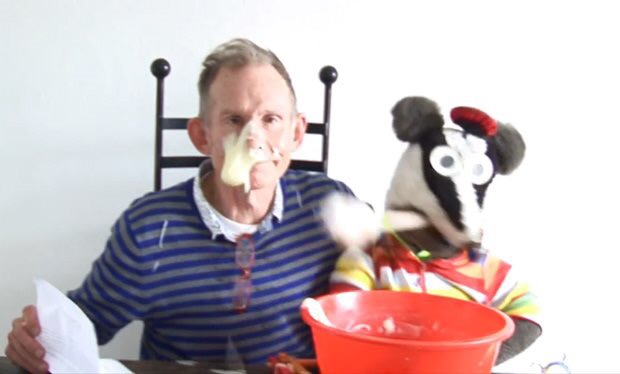 I didn’t watch Bodger and Badger much with the children. My disinterest not the result of being unable to tell which character was which, moreover it didn’t hold my attention like Brum, Rainbow, Rosie & Jim, Postman Pat and Noddy…… I always went for the high-brow kids shows!

Power Rangers, Thunderbirds and Captain Scarlet were also shows I binge viewed with the nippers during their formative years. After the show had concluded, my son insisted we replicate the scrap between the hero and the bad guy with him as the hero.

So, for example, if we’d watched Thunderbirds he’d be Virgil Tracy and I’d be The Hood. If our viewing had been Captain Scarlet he’d play the eponymous hero and I’d be a Mysteron, which I played by shining torchlight on the walls.

During these play fights, Jonny was a perfectionist demanding forensic accuracy in the replication. When I took on The Hood’s character he even wanted me to shave all my hair off to more closely resemble the Thunderbirds nemesis.

When I refused, telling my son I didn’t want to be bald at 30, he responded I could always wear a hairpiece afterwards kept in place with a tied ribbon. He also opined that owning a toupe could also turn out to be therapeutic, as when I’m not wearing it I could stroke it like a dog, and even take it for walks……. So that’s where our Ian got the idea from!!

I refused to acquiesce to my young boy’s request, meaning getting a deluge of mashed potato in the face when we later played Bodger and Badger.

Sitting here now reflecting on those times brings a smile to my face. Even with the prohibitive cost of all the mashed potatoes, torch batteries for my role was a Mysteron and the pain endured when Jonny tried to pull my hair out when we played Thunderbirds. 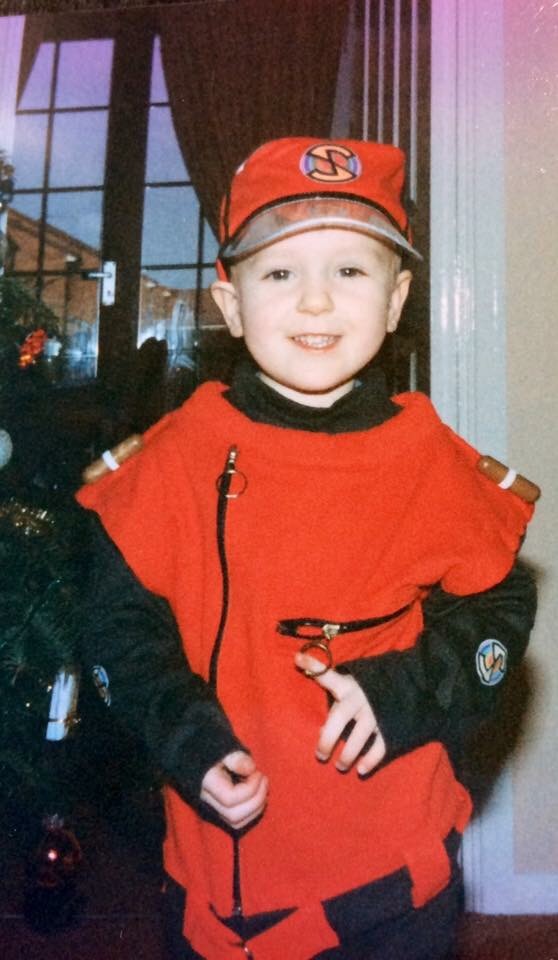