After yesterday evening’s dinner, I indulged in a cordial few hours chatting with my brother Ian in our parent’s dining room. To add to the conviviality, we drank a glass of Hardonnay (chardonnay mixed with Viagra) and smoked cigars specially engineered by my brother from rice paper, Miracle Gro plant compost and the souls of the oppressed.

I’m not sure why our kid felt the need to add a penile dysfunction drug to the otherwise pleasant bouquet of the wine. It did nothing for the aroma or taste of the vino, or indeed was fit for purpose for the reason the product was developed….. Not that I wanted it to, I hasten to add!

The unorthodox wine mixer merely gave the drink a musty bouquet, highly acidic taste akin to battery acid and a hue of my butcher’s face. If you’re unacquainted with the pallor of his visage, it is Mystical Purple in the Dulux colour chart. If you are acquainted with my butcher’s face, it’s Burgundy Blast in the Dulux colour chart!….. I know that doesn’t make any sense, but neither does the majority of this narrative so don’t worry about it!

When our Ian produced his homemade cigar’s from his travel bag, I got even more of a surprise than when he added Viagra to chardonnay. After all, he’s always been anti-smoking in any form, not to mention I hadn’t realised he’d turned his hand to manufacturing tobacco products…… Although, as this contains plant compost instead of tobacco, I’m unsure whether they could class them under that particular product genre. 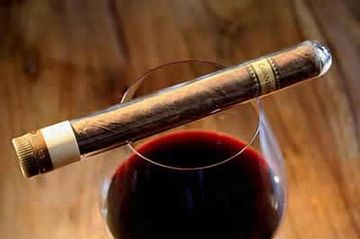 When I asked my bro why he chose to omit tobacco from his product, he responded that smoking plant compost was healthier than the usual cigar ingredient. I asked if he had confirmed, through exhaustive research, that igniting it didn’t make the potting product toxic or explode in your face. The following discussion ensued:-

Me (Patronisingly) – “Yes, but if I lit the compost beneath them I doubt my begonias, petunias and marigolds would look as cheery as usual.”

Ian – “But why would you set the compost alight? That would be a ridiculous move!”

Me – “Well is it any more ridiculous than your idea of lighting compost in a makeshift cigar?!

Ian (defensively) – “Don’t be such a killjoy, Gaz. I’m attempting to produce a smoke with less safety risks. My intentions are honourable despite the cigars unorthodox components.”

Me (Patronisingly, again) – “I get that, Ian. I raised the subject of the stringency of your product testing, as I suspect the people who’d grant you a licence wouldn’t be satisfied with a response of ‘Well my brother’s potted plants always look cheery’, when inquiring of the health & safety research into your cigars.”

Ian – “Do you think I should lie then? Misleadingly inform them I’ve done loads of testing to secure a licence, Gaz?”

Me – “No! I’m suggesting you undertake thorough and exhaustive testing. I’d suggest you gain their confidence that the cigar doesn’t have any potential risks to the smoker, or indeed individuals in their vicinity.”

At this point our Ian hastily dashed out of the dining room, I’m not sure why but I suspect the Viagra might have just kicked in!