I spent a good part of my Saturday undertaking horticultural maintenance within the grounds of casa Strachana. Not a vast freeholding, the upkeep of the grounds is ordinarily a relatively straightforward chore, with exception of the maze – a recent self-indulgence of my wife Karen.

My diminutive spouse insisted on designing and constructing the maze, such was her enthusiasm for the project. She claims to have based the design on my neurological corridors when I’m writing, ie nobody (including me) knows what the heck is around that next corner. 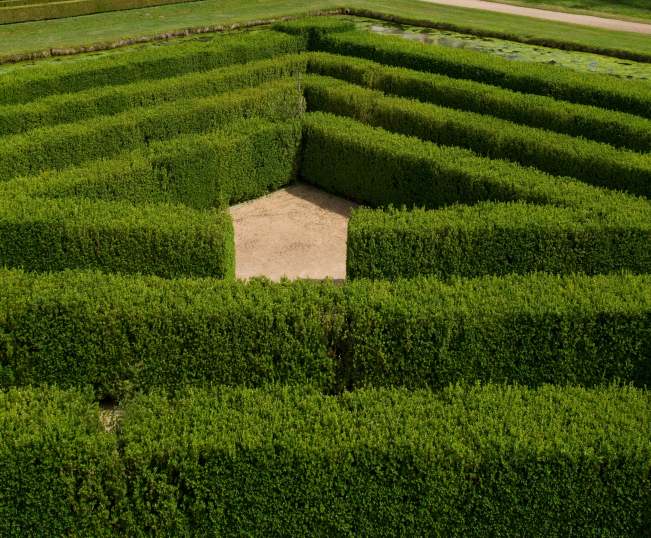 The end product of her toil is a fairly elaborate maze gracing the corner of the garden. Although not aesthetically displeasing on the eye, the consequence of her foolhardy decision to utilise dwarf conifers for the walls mean it’s an uncomplicated maze from which to gain your liberty.

Once inside the horticultural puzzle, being able to see above the two foot high conifers renders the construction as unfit for purpose. If bored or lost the visitor merely has the option to step over the walls to escape the clutches of their horticultural gaol.

If they found themselves within the confines of the maze, being of a lower stature than the dwarf conifers, the neighbourhood cats or an itinerant hedgehog may experience a greater challenge to escape. That being said, as with humans, cats would be able to jump over the walls for their liberty; leaving just the hedgehog with the challenge of gaining freedom.

Some maze owners monetise visitor attempts at successfully navigating from entrance to exit of their horticultural puzzles. However, this isn’t a route (pardon the pun) Karen intends to pursue with her own piece of dwarf conifer art.

The fact it’s sides are too low to make it suitably challenging for human’s and cat’s has negated any real hope of her recouping the money spent on her project. Additionally, she’s ruled out pitching it as a hedgehog maze, mooting that erinaceinae’s are too timid and tight with their money to make it a financially viable option.

She has a point, I’ve never seen a hedgehog queuing to undertake the challenge of solving the navigational complexities of a maze. Unless you count the one I witnessed who queued for half an hour at the Ainsley Scragg Maze, only to be turned away at the turnstile for wearing trainers.

Anyway, yesterday I had a thoroughly productive time in my front and back garden. This included cutting back spent buddleia flowers, manicuring a shrub (whose name currently evades me), cutting and edging both lawns and hoeing the soil in the borders. Additionally, I devised a hedgehog dress code should Karen change her mind about monetising her maze project.

Someone recently commented to me “You seem to garden a lot, Gary”, to which I responded “Yes, I do.”……. It’s not the most interesting conversational exchange you’ll ever read, but I’m trying to pad this narrative out to get to my daily goal of penning a minimum of 500 words.

Right, I need to dash as apparently Mike from next door has just knocked to ask if we’ve seen his cats anywhere……. If they’re in that maze, they better not be wearing trainers!