Well the Easter weekend has been and gone. It was a welcome house guest who brought food for thought, a Galaxy chocolate egg, along with an episode of TV’s Home Under the Hammer.

The food for thought, was my weekend review of where my spiritual beliefs actually lay. I have the utmost respect for days in which we acknowledge the crucifixion and the resurrection. However, after the past six years of seemingly unending detritus inflicted on the family, what do I really believe theologically?

If truth be told, I can’t give a definitive answer to that question. However, the fact my thoughts were for a time on the real meaning of Easter, not chocolate eggs and bunnies, is an re-assuring sign that my faith remains intact on some level.

Over the weekend, my wife unexpectedly presented me with a chocolate Minstrel Easter egg (or holiday egg, or whatever we have to call them these days), a brand from the Galaxy confectionery stable.

I personally prefer this make of chocolate to their European competitors, so I was very appreciative of my spouses gesture.

Being on a diet she didn’t want a reciprocal egg, so instead I purchased her a bunch of tulips. Apparently, the flowers aren’t as pleasant on the palate, but the fact they have less calories than chocolate went a small way to appeasing Karen.

I’ve not opened my Galaxy egg as yet. I’ve been anxious of late, afflicted by an unsettled stomach that’s required an over reliance on antacid tablets…… Maybe I’m suffering from Pre-Minstrel Tension!…….. Apologies for that appalling gag…… Moving on swiftly. 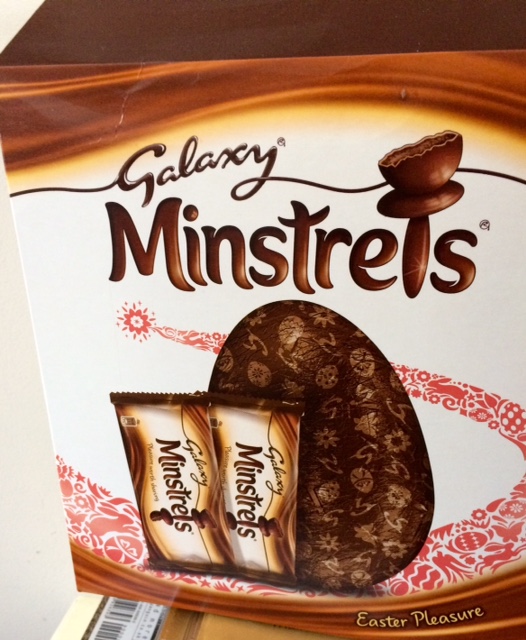 Witnessing Home Under the Hammer on TV, re-iterated my long held belief that contemporary holiday television schedules are woeful; be that free-to-air or premium channels.

There’s not even the wall to wall insipid B-movies anymore, as was our televisual treat before plunging ever deeper into a world of multi-channelled tabloid TV.

These days, with the exception of Christmas, we’re bequeathed the usual day to day schedule during holiday periods. There isn’t even the effort of dressing the presenters as rabbits to give the show a token Easter feel…… Although on the plus side, at Easter there’s a chocolate accompaniment to your cuppa, instead of a the usual stale bourbon biscuit.

Even though I was avoided experiencing the sugar infused utopia of Galaxy chocolate, my erratic gastric juices didn’t stop me dining well over the holidays.

Fish and chips were the order of the day on Good Friday, with Easter Sunday’s offering a very agreeable roast beef meal with my affable family….. Or was it an very affable roast beef meal with my agreeable family?…… On reflection, as my daughter Rachel was present it was definitely the former as there wasn’t much agreeing going on at the dining table.

As I bring this blog to a conclusion, I’ve just heard on the news that the Prime Minister of the United Kingdom has called a surprise General Election in June…… Well as surprising a decision by a Government with no opposition, a 21 point lead in the polls and pre-Brexit financial stability could be.

This means for the next six weeks, we have the joys of wall to wall TV broadcasting of insincere political promises, the Labour Party locking Jeremy Corbyn out of sight like a latter day Rapunzel, along with the continued unrelenting coverage of Homes Under the Hammer.