Ordinarily, my writing process follows a similar recipe every day. It involves around two hours graft, half a bag of wine gums, two pints of water, a minimum of 500 words penned, add one picture that relates to the narrative. Before I finally add the title and publish.

Today, I’ve decided to take a different creative approach. This meander from the normal literary recipe follows a title epiphany which manifested itself yesterday evening. A thought that made an unscheduled visit as I sat minding my own business in the Newcastle pub The Forth.

Sitting with my brother Ian, quaffing a pint of Amstel beer, wondering where the smell of damp was emanating from, the title of ‘Pleading The Fifth In The Forth’ temporarily distracted me from the mysterious stale odour.

I loved the heading for a narrative, vowing there and then to challenge myself to create a monologue with a topic that fit within the title framework. I knew it wouldn’t be an easy task, after all ‘pleading the fifth’ is something that ordinarily occurs within the American legal system. Not in a hostelry at the centre of an English metropolis. 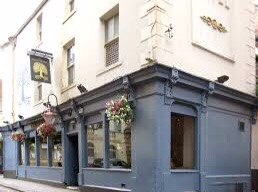 Being an avid watcher of US legal dramas Suits and The Good Wife, I’d like to think I have an adequate understanding of the purpose of ‘pleading the fifth’. This being, it gives Americans the constitutional right to avoid self-incrimination by remaining silent under legal interrogation.

Although, British criminals cannot utilise this evasive legislative response under cross examination, they have many alternative options at their disposal if they don’t wish to answer a question posed by policeman or barrister. Amongst them “No comment”, “I decline to answer”, “Blow it out of your arse, copper!” and the catch-all remark “Bollocks!”

So how do I incorporate the subject of ‘pleading the fifth’ into a narrative set in The Forth pub in Newcastle? What literary tomfoolery can I muster to shoehorn such an unlikely topic into a night of beer and nostalgia?

Could I fictionally wax lyrical about our Ian being evasive when questioned about rumours of his cross-dressing. According to fiancée Ann he changes into men’s clothes when he gets in from work!

Is it possible I wonder to extol further untruths, such as Tim refusing to answer if he was the shadowy figure  on the grassy knoll in Dealey Plaza, Dallas, when JFK was assassinated….. I’m a little unsure why he won’t respond to the query, after all he has the pretty good alibi of not being born in November 1963, when the shooting took place.

One of our group is a policeman who for the purposes of anonymity I’ll call Uncle Buck. What he doesn’t know about tazering people, along with Masonic cheese and wine parties isn’t worth knowing. He is discreet, though, ‘pleading the fifth’ when asked about the subjects. Only dropping his guard once when drunkenly disclosing an unsavoury incident when misusing a taser to toast a Masonic brie sandwich.

I’d like to clarify at this point that this is a fictional narrative, and our policeman friend (who I’ll call Jack Regan to also keep his anonymity in this paragraph) doesn’t disclose work information, misuse tazers or make cheese toasties for masons. He most definitely ‘pleads the fifth’ if asked about anything work or melted mozzarella related.

The self-appointed leader of the group is Darrin who can also be very secretive. Sitting outside in The Forth’s beer garden he refused to answer a number of my questions which quite frankly I found ignorant. I wouldn’t care but all I wanted to know were the PIN number of his bank debit card, his online banking password and the secret of life……. The taciturn sod!

I’m going to bring this blog to a conclusion now. I’m writing this on my phone and to be quite frank it’s a real pain in the lexogical ass.

If anyone wants the recipe for tazered melted cheese sandwiches you know where I am!