I concluded yesterdays yarns from the scorebox at the point I’d been promoted within the scoreboard operatives hierarchy. I was thirteen summers old and due to the promise shown at updating the wickets and overs, I’d been given the extra responsibility of ensuring that the teams and the crowd (including legendary old players) were kept abreast of the correct run total.

It was a remit I embraced with both hands, along with a pocket full of jelly wriggler sweets for sustenance during the long hours of concentration required.

I took to my role as senior scoreboard operative with great tenacity, determined I would never hear the cry from the fielding skipper of “Can you put the score right, Gary?” Words that every one in my role dreaded. Shamefully letting your club down by having your capability at undertaking the role brought into question.

Incorrect scores being displayed was something that the elderly ex-players particularly frowned upon. One aged ex-2nd team player had a knack of asking me if the total on the board was right on every circuit of the pitch he took. I think it was just a habitual tic the guy had, not a deep mistrust of my capabilities in the role, but annoying nevertheless.

If memory serves me correct this old guy had some weird club record during his playing days. Something along the lines of being struck in the testicles by a cricket ball more than any other Fell 2nd team player in one season. He lost out on the Durham Senior League award that year to a Seaham Harbour batsman, whose cricket box apparently attracted the corker ball like a magnet did metal.

For the uninitiated a cricket box is the common name for the plastic genital protector worn by the batsman. I’m not quite sure why I referred to it as the common name, after all, unlike plants, it doesn’t have a far grander Latin moniker like bollockus protectia. 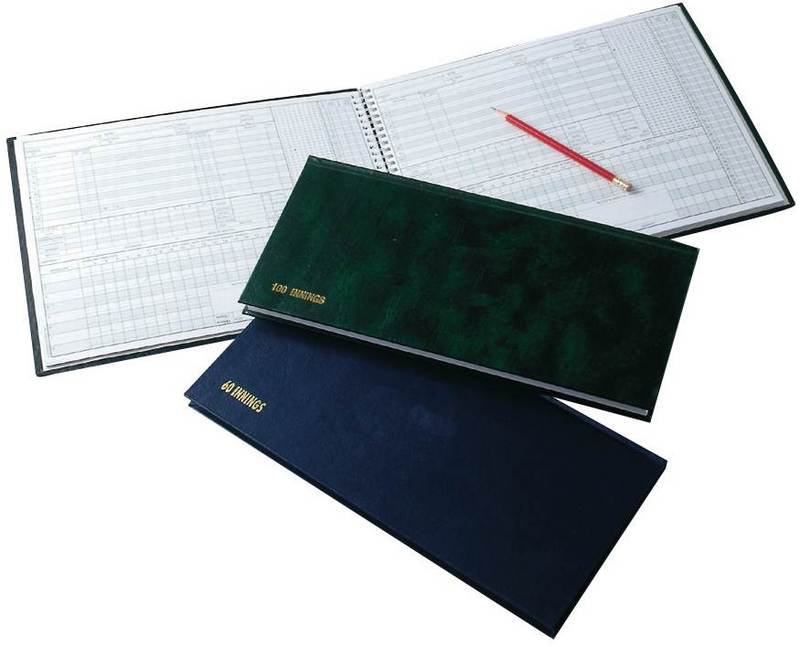 After serving my scoreboard operative apprenticeship, the following year I ‘made it’ by being granted the non-executive role of Guardian of the 2nd Team Scorebook (a scorer). This extra responsibility came with a weekly pay rise of 50p, a Bic biro, a Tony Tait (2nd team captain) pencil case and a coupon for 20% off ‘out of date’ food from The Griddle sandwich shop on Low Fell…… If you were 1st team scorer you got a Doug Hudson pencil case and a voucher for ‘in date’ food at The Griddle.

I was chuffed to be asked to undertake this role, although it didn’t do a lot for my OCD, which I foolishly exacerbated by the scoring method I employed. This misguided approach to recording match statistics included the decision to utilise a coloured pen system.

This strategy, stolen from the book Colourful Cricket Scoring Methods by Dame Helen Mirren, advocated using different colours depending on the number of runs struck by the batsman per delivery. For example, on the match ledger, a single would be transcribed as number 1 in black, two runs would be recorded by 2 in blue, a boundary led to the entering of a 4 in yellow or 6 in red.

It all looked very neat alongside my block capital writing of the batsman’s name and method of dismissal. As I alluded to above, though, it played havoc with my OCD. On one occasion my yellow pen ran out of ink, meaning I had the angst of having to record a 4 in blue……. It was at this point the valuable lesson of berating a biro that has run out of ink with “Work you useless piece of crap!” has no absolutely no effect on it kicking back into life.

When my dad, who was watching the game at Eastwood Gardens that day, walked past I shouted through the window of the scorebox to enquire if he had a yellow pen on him. My dad, who probably has never owned or even used a biro of that colour, responded he hadn’t. As he was now 20 yards away, clapping a boundary by Tony Tait, I resisted admonishing him for his inept contingency pen policy. Instead, acknowledging the umpires signal and begrudgingly recorded a blue 4 in the scorebook.

With my kaleidoscopic run recording system in tatters, the last thing I needed was the elderly ex-Fell player asking me if the scoreboard was correct, which occurred shortly after. I disingenuously smiled back at him and nodded my head, while concluding that perhaps all the testicle shots he took in his playing days may not have been accidents after all.

Halfway through that season, I became first team scorer after the original incumbent was headhunted by Burnmoor cricket club with a promise of £2 a match wages and a bigger pencil case.

Although, 1st and 2nd team captains Doug Hudson and Tony Tait were polar opposites as individuals, they were both good blokes who treat me well. Doug it was who persuaded me to change from medium pace seam bowling to the wrist spin I bowled in practise. I’d like to think that was because he saw something in me as a spinner, not that he thought my seam bowling was rubbish……. But who knows?!

Both guys would clash occasion on playing policy and the quality of Griddle sandwiches; leading on one occasion to Tony trying to persuade me to bowl seam again, just to spite Doug.

I took many life lessons from being a scorer as a kid in Gateshead. I picked up many new words in the changing room from the adult players, who’d sometimes forget ‘the kid’ was around. I met many ‘characters’ in scoreboxes; eccentrics from north east England mining towns, some of who communicated in a type of unintelligible frontier gibberish I’d never previously encountered.

But most importantly I learnt that if your yellow pen runs out of ink it’s not the end of the world, so chill!

As I write, I’m sitting shielding from the suns rays in my back garden. It’s Saturday midday in June and mind goes back forty years ago almost to the day, At this time my dad would have been driving me up to ‘The Fell’ ground, Doug Hudson pencil case (with real moustache) in hand, to discharge my scoring duties. I recall many a fond memory from a care free time when running out of yellow ink, along with an old man repeatedly asking me if the scoreboard was right, were my only worries.

I’ll conclude this narrative now, with a view to relay more tales from the scorebox tomorrow.