It’s the English FA Cup final today. Due to my indifference about the contemporary game of football, with it’s over-indulged top professionals and endless pimping by Sky Sports, I’ll be giving today’s Chelsea v Arsenal game a wide berth.

My viewpoint now the polar opposite of what I opined in childhood, when FA Cup day was one of my favourite days of the year. A annual event that was only usurped in the contentment stakes by days where we got to visit uncle Harry in prison.

To clarify, uncle Harry wasn’t there as a consequence of committing a heinous crime, he was the cloakroom attendant at Armley Jail. My brother Ian and I loved to visit him at work in the early 1970’s, when we would be given access to where the villains hung their hats and coats during mailbag sowing classes.

They say that crime doesn’t pay, which is maybe true, but it appeared to if you wanted a beautifully tailored coat or a fetching trilby.

Our Ian and I cherished these annual visits, until they were stopped in 1973 when uncle Harry was sacked for causing a riot. This the aftermath of him inadvertently giving Knuckles Harrison’s Crombie to Jimmy ‘Two Fingers’ Cranberry.

Apparently Knuckles was very possessive of his upmarket coat, so when he saw Two Fingers strutting around the exercise yard in it he went ballistic. The ferocity of the fight exacerbated further when the coat got ripped during Knuckles attempt to reclaim his beloved Crombie. 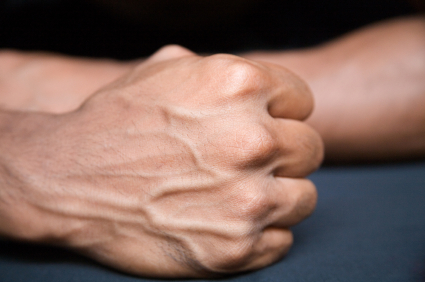 During the industrial tribunal, which resulted in his dismissal, a strip was torn from uncle Harry for consequences of his carelessness. As this took place he stood emotionless, meticulously clad in a camel coat with a ‘Razor Tomson – Cell 35’ name tag sown inside the collar.

After dismissing him from his role as cloakroom attendant, the leader of the tribunal complimented my uncle on the quality of his camel coat. asking him “You don’t know where I could get a reasonably priced trench coat do you?”

Legend has it that the tribunal head was himself fired six months later for handling stolen goods. His plea that he hadn’t seen the ‘Jack Saracen – Cell 93’ name tag on the coat fell on deaf ears, his case not helped by refusing to reveal how the coat came to be in his possession.

They were memorable visits to the Leeds gaol for my brother and I. On one occasion our Ian stood on my shoulders while we paraded around the cloakroom in the duffle coat of an prisoner dubbed ‘The Ainsley Scragg Dentist’.

This nom d’plume ensured this guy was feared amongst his prison wing. Fellow inmates assumed he got the nickname because he tortured his victims by removing teeth without anaesthesia. However, the truth was he was merely a dentist who plied his trade in the town of Ainsley Scragg. He had been deprived of his liberty for using the wrong type of floss during routine hygiene work……. That may seem harsh but town elders were sticklers about dentists rigorously following flossing procedures back in the 70s……. Or so I’m led to believe.

I started this narrative by relaying my complete indifference about watching todays FA Cup final. I want to close by telling the games participants that despite earning shedloads of cash, you’ll never have a coat as splendid as Knuckles Harrison’s Crombie.