Today, a well known social media site that rhymes with Racehook reminded that two years ago today I spent a day at the races, where I met up with an old friend from Gateshead.

I’m not sure why I’m making a poor attempt at providing the website anonymity, but as my mum has always advocated “It’s better to be safe than sorry.”…… Actually she says “It’s better to be sorry than safe.”, but I suspect she means the former. If she does mean the latter, she needs to address her approach to health and safety.

I’d arranged to meet my old mate, also called Gary, at the course. He was ensconced at the Knavesmire racecourse as part of a team building day with colleagues. Why he invited me to an event aimed at enhancing team spirit I’ll never know!

For those who don’t know, the Knavesmire is the commonly used name for York Racecourse. Although, it appears, it can’t be that commonly known if you didn’t know …. Perhaps you need to address your poor general knowledge! …. Not a criticism, just an observation!

I recall, as I left the house that morning the suns rays illuminated the East Leeds skyline. My wife Karen opined it might be a sign I’d have a lucky day betting wise. Not sharing her natural optimism, thought it was an omen I’d get flipping sun burnt.

At 11:15, Karen dropped me off at Cross Gates train station. I felt smart as I stood on the platform suited and booted, accompanied by my ‘lucky’ anvil.………. It has to be said, though, I really wish I had something ‘lucky’ that wasn’t so bloody heavy!

It is a twenty five minute journey to York by train. … Unless you get the London train. If you do that you’d be going in the wrong direction; so your journey will likely exceed two hours……. Thankfully, I avoided the London train so my journey was relatively speedy. 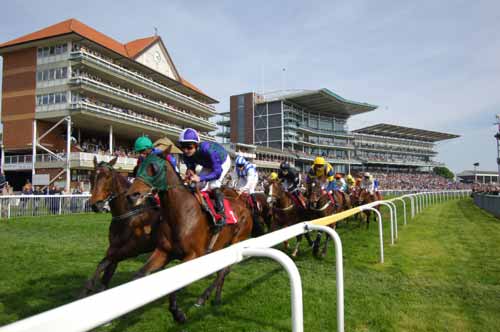 Once at the Knavesmire, I recollect walking down the concourse to the ticket office, getting unintentionally showered with spit from Scouse ticket touts asking “Do you want ticketssssssssssss?”

Interestingly, one of the signs held by a tout enquired of the passing punters “Do you want rickets?” I assume this was a spelling mistake and he wasn’t offering advice on contracting a skeletal disorder from the lack of vitamin D consumption.

Even though I needed a ticket I wasn’t going to buy one off a tout. A person who regularly fleeces the seller; and charges over the odds to the buyer. It would trouble my conscience too much to buy off a tout. ……………. Unless he offered me it at half price, then it would be bollocks to my conscience and “Ok mate, I’ll have one.” would be my response.

Anyway, I didn’t get offered one at half price so I purchased one at the ticket office, before meeting up with my mate and his colleagues in the Grandstand area of the course.

It looked like my ‘lucky’ anvil was having an off day when I won nothing in the first four races, but a quirkily named horse called ‘Udododontu’ won me £55 in the fifth race; and an each way bet on ‘Cartage’ won me £23 pounds in the last.

Udododontu, the horse who won me £55, was a bay gelding. I was so elated, if I could have sown them back on for him I would have.

To cap a memorable day, Cinderella managed to fit into the glass slipper for the Prince, they married and lived happily ever after. ………. Oh sorry, I’m getting confused; that was a different day out.