On the day my parents married I hadn’t yet joined this mortal coil; consequently, I’m unable to provide first hand experiences of that day. However, through engaging with people who were there that day, I understand the service and reception went something like this:-

On this day 57 years ago a young man from Farnley and his newly betrothed girl from Gledhow walked down the aisle of a Woodhouse church in Leeds. It was the commencement of a marriage that spawned three children, residence in two north of England areas and a legacy of selflessness, warmth, stability and humour.

It was a leap into the unknown for the 24 year old man and his 20 year old bride. Akin to many who embark on this matrimonial journey, they left the kirk with hopes of partnership longevity, dreams of extending their family, along with aspirations of health, humanity and happiness.

The groom, a handsome undemonstrative man, had dressed so hurriedly that morning that he hadn’t removed the price tag from the sole of his black leather shoes. His bride looking resplendent in white, and despite adorning black mud covered welly boots, cut a striking figure as the couple strolled out of the church….. Although, behind her smile she was really thinking “Is that all he paid for his shoes; the tight bleeder!”

The Gledhow girl’s muddy wellington boots were the consequence of her parents insistence she milked the herd of cows prior to departing their terraced home for the wedding service. Her family weren’t dairy farmers, and the cattle belonged to Mrs Aitken at No 43. However being an accommodating individual, in addition to an awareness of Mrs Aitken’s recently acquired phobia of udders, she obliged.

The old lady was so grateful to the young bride-to-be for her pre-wedding assistance that she presented her with a matrimonial gift…….Bovine influenza!…….. It was an unorthodox present to give a young couple embarking on a marriage sojourn, however in Mrs Aitken’s defence the virus was inexplicably on the wedding present list! 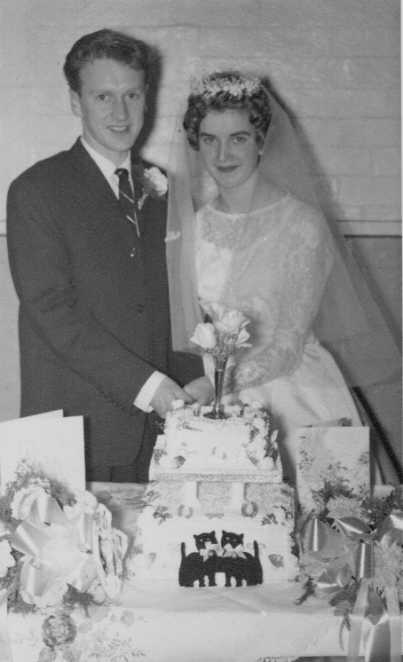 After the wedding photos, the grooms uncle Chesney started showing early signs of contracting bovine flu. Meanwhile, the newly-weds, family and friends headed off in various modes of transport to celebrate further at the wedding reception.

Family folklore has it that the bride’s uncle Jimmy required assistance to make the trip after his transport refused to start outside of the church. This, though, was a short-lived setback after her uncle Francis jump-started Jimmy’s ride.

It was the first time anyone in the congregation had seen a horse drawn rag and bone carriage started by a car battery. It worked a treat, though, as the horse got such a jolt it departed at speed, arriving at the Woodcock Pub, Farnley before the cars.

The reception wasn’t at the Woodcock Pub. However, in Jimmy’s defence, I imagine navigating a carriage pulled by an equine whose testicles had just received a 12.6 volt shock couldn’t have been easy!

At the correct reception venue, after a traditional Yorkshire meal of scree, tripe and onions, the entertainment was provided by uncle Chesney. It should have been a local band ‘The Travellers’ but they weren’t able to make it as their van had broke down.

As a consequence, the guests were ‘entertained’ by watching uncle Chesney’s health diminishing over a two hour period, as bovine flu took an ever stronger grip on his constitution. His symptoms of sweating, shivering and mooing were so bad an ambulance was called for the groom’s out of luck uncle.

A couple of hours later, after Chesney had been taken to St James Hospital, Leeds, the happy couple cut the wedding cake. This was undertaken to rapturous applause from their guests; mightily impressed the newly-weds were able to dissect the lower tier of five with the chef’s toothbrush. The consequence of being unable to locate any suitable clean cutlery…… An explanation of why the chef had his toothbrush in the kitchen but no cake slicer was never disclosed.

After the service, the happy couple were taken to Scarborough on uncle Jimmy’s horse drawn carriage. They should have gone to Blackpool on the opposite northern coast, however, as the horse required another jump-start they didn’t get much option!