This morning, whilst seeking inspiration for a blog topic, I commenced a surveillance of my back garden through the bay window. Witnessing the clothes drying in the now obligatory breeze, along with the capricious appearances of solar rays, I concluded that UK summer’s are rubbish these days.

During this period of contemplation, my wife Karen and I discussed how we could solve our lack of sun exposure in 2017. She mooted that a holiday in warmer climes would probably be the only solution to our conundrum. I disagreed, opining that it would be infinitely cheaper to wander outside and shout skyward “Get warmer you useless b*****d weather!”

My diminutive spouse opined that my idea was a ridiculous strategy that had no scientific basis. Undeterred though, I walked out of the backdoor stood on my step and, looking up at the broken clouds, yelled “Get warmer you useless b*****d weather!”

To my missus’ and, if I’m honest, my surprise the sun appeared almost instantaneously.

“There you go. See we don’t need to spend hundreds on a holiday when you can resolve inclement weather with hocus pocus.” I smugly informed Karen.

“That proves nothing!” she barked back. 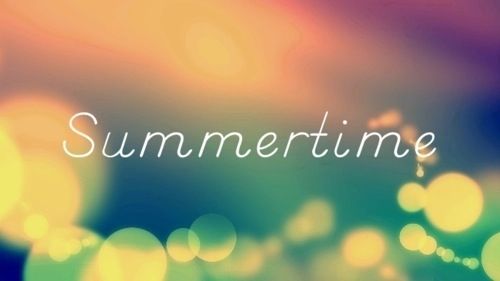 Convinced I’d been suddenly blessed with magical powers, I started pointing at things in the garden in an attempt to make them levitate. Sadly, as none of the plants or garden furniture moved, I couldn’t add inducing levitation to my skillset as a magician . The only upwards movement was from a bird at the lower patio, but I’ll not claim credit for that, suspecting the ascension was from wing power not sorcery.

In a way, it was a blessing I hadn’t been bequeathed with the powers of moving items by merely pointing at them. After all, I don’t think the missus would have been chuffed to find every plant in our borders hovering 6ft above the soil.

We’ve spent over 20 years getting the garden how we wanted it, and the original garden design (or indeed any subsequent blue print amendment) were definitely bereft of mid-air hardy perennials with heaps of barren top soil below.

Anyway, during this period of epiphany seeking, a much loved song acclaiming our current season made an unscheduled appearance in my neurological walkways.

With apologies to the late American composer George Gershwin, I adapted part of his song Summertime. A self-indulgent move to more accurately reflect summer in chez Strachan, than his original descriptive in Porgy & Bess:-

“Summertime, and the weather is breezy. Geum’s are sprouting and clematis is high. Your mama’s stressed at your daddy’s rank cooking. End product woeful; roast, bake or fry.

One of these mornings, he’ll raise up singing. Papa will spread his wings and head to the sky. Until that moment, nothing will harm you. Unless you trip on the lawnmower standing by.”

I’m unsure why I felt the need to bastardise lyrics of a classic lament from the Great American Songbook. Despite the surety Louis Armstrong and Ella Fitzgerald would have still interpreted and delivered my lyrics without detriment to the song, the jury’s out whether my proffering’s would have enhanced it akin to those Gershwin penned.

Actually the jury aren’t out! They immediately dismissed my verses as crude and rough around the edges; admonishing me for defiling a timeless piece of art.

I’m told by an opera aficionado (well a balloon bender from Hepden Bridge) there would be no place for ramblings of lawnmowers and my questionable culinary skills in the opera Porgy & Bess.

Lawn manicures and below par cuisine absent topics in the operatic story of Porgy, a disabled black beggar in Charleston, South Carolina. A much vaunted tale in which he attempts to save Bess from her dysfunctional companions Crown and Sportin’ Life.

As a consequence, my contemporary lyrical adaption of the aria Summertime is unlikely to ever see the light of day on Broadway….. When I say unlikely, I really mean no chuffing chance whatsoever!