Some ancestral object d’art may not have the aesthetic allure of a Capability Brown landscape design, or an Italian Renaissance painting; however that shouldn’t diminish its importance within the fabric of your family history.

Before I move on I should clarify that, to the best of my knowledge, my family have never owned a Italian Renaissance painting. Its inclusion is for scene setting purposes only. This prior to its eventual arrival at the actual topic of my monologue, which hopefully wont be delayed by a points failure at Church Fenton or me rambling off on an inane tangent.

I did have a great uncle Frank whose GP was quite adept with watercolours, but I was reticent to throw that into the narrative setting in the first paragraph. A decision born from assuming your more likely to be able to picture a Italian Renaissance scene than Dr McClyde’s amateur piece Homage to Sparrows.

Right, as I’ve got that out of the way I’ll move to the less than beautiful object whose existence I only became aware of last Friday.

It was while doing some gardening for my father (Mally), this little piece of family history made an unexpected appearance into my consciousness. Its manifestation coming shortly after me shouting the simple question “Have you got any string, dad?”….. Incidentally, I had to shout as Mally was in the kitchen, not to mention having to contend with background noise of nearby house builders.

For your informational purposes, I had a requirement for string to secure bamboo stakes to aid the re-straightening of a windswept peony rose. A plant which was looking back forlornly at me from its position in the corner of the garden borders.

Despite me asking the question loudly, my pater initially misheard the word string for rock artist Sting. This led to a response of “Yes, I’ve got his Ten Summoners Tales cd. Why do you want to borrow it?”

“No dad, I said string not Sting!……. Strrrring!” I yelled back over the noise of the cement mixer on the opposite side of his back fence.

At this point Mally headed into the garage. I wasn’t sure if he heard my clarification announcement, but as he doesn’t keep cd’s in the garage I was pretty sure he’d not gone to retrieve his copy of Ten Summoners Tales.

Within a few minutes my dad appeared back at the open kitchen window, where he’d been stood during our earlier conversation. In his left hand he held a scruffy old tin. This grey, tired looking object had obviously seen better days (looking at it, quite possibly the Napoleonic Wars).

“Here you are, Gary!” my dad shouted, while motioning me over with his right hand.

On arriving at the kitchen window, I took the tin from his hand for closer inspection of this sorry looking receptacle, which was the size of a tea caddy. From this scrutiny, I noticed the lid had a small hole in the centre and a slightly larger square gap on the edge. 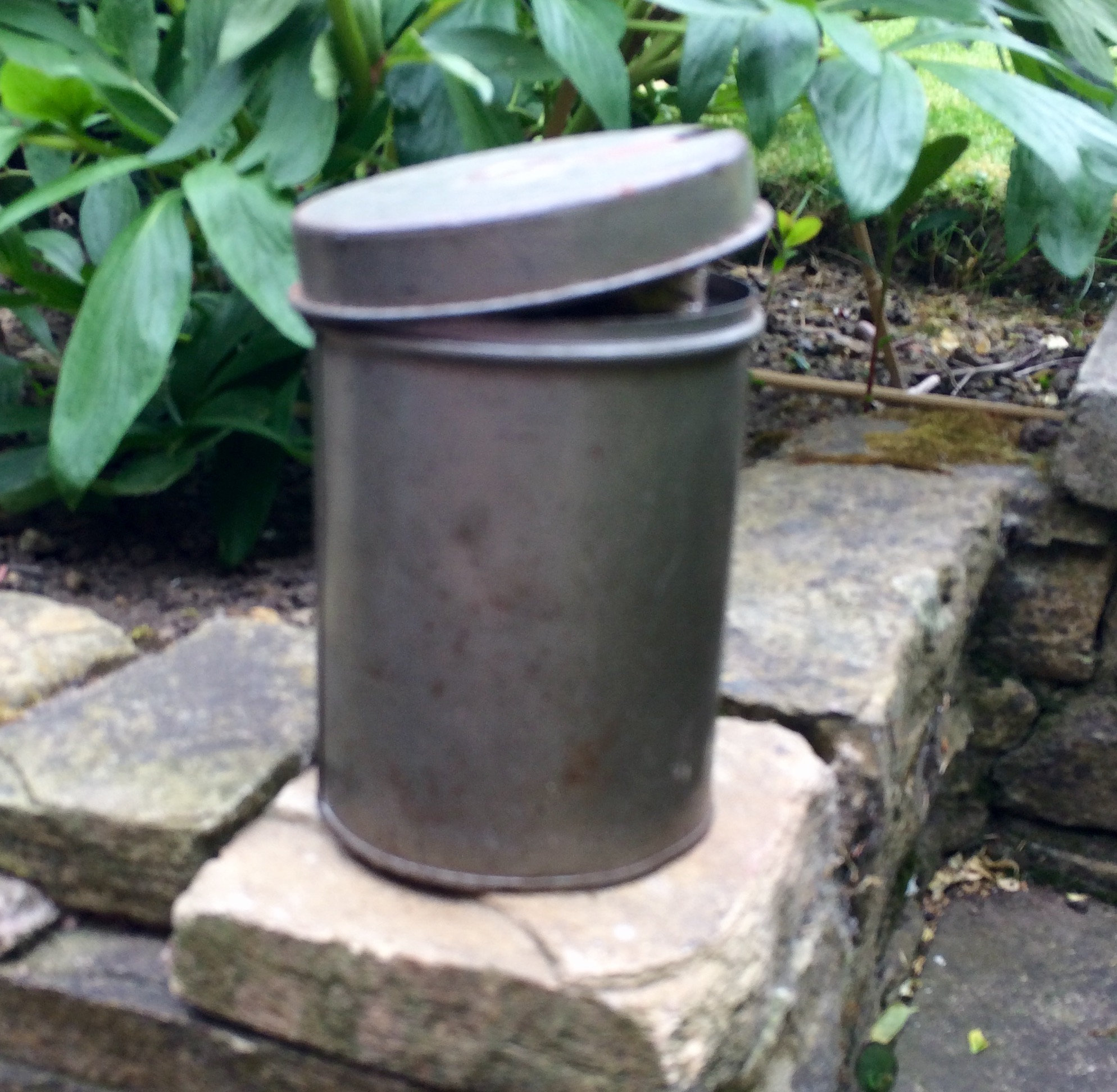 “Where the hell did you get this dad?…… And what on earth is it?” I quizzed, with what for me was rare inquisitiveness.

“It was your granddad Jack’s. It’s a string tin he kept in the garage at the holiday bungalow him and your grandma had in Reighton.”, my pater advised

Since turning the age where I’m permitted to book my holidays through Saga, I’ve spent increasing amounts of my life in garden centres. In all these visits I’d never heard of or indeed seen a string tin. There, though, in my hand I had living proof of their existence.

If this tin had been handed to me by my granddad, not only would I have fainted as he died 40 years ago, I may have been reticent to open it. Unlike my quiet and undemonstrative dad, he was a prankster, always with a glint of mischief in his eye and an insatiable need to quench his vociferous thirst for a laugh.

I’d wager, had I taken the tin from Jack Strachan, something would have jumped out at me as soon as I’d flipped the lid open.

However, as the tired looking grey receptacle was handed to me by my dad, I knew with certainty I could open it safe in the knowledge a frog or swarm of irate wasps wouldn’t confront me.

Sure enough, when I opened the lid there was nothing to cause a shock……. Well, unless you get disturbed by being confronted by balls of string, which thankfully I’m not.

“How old is this tin, dad?” I enquired, while I fed the end of the string through the hole in the centre of the lid.

“I’ve no idea, but as your granddad died 40 years ago, I’d guess around 50 years old at least.” He responded.

Mally then left the kitchen as I cut a two foot length of string, which I then utilised to secure the wind damaged peony rose to the adjacent bamboo canes.

As I stood admiring my handy work, I was greeted by a call over my left shoulder of “Here you are, Gary.”

My dad was back at the open kitchen window holding an item I was unable to distinguish from a distance. On catching my attention, he shouted over to me in his dulcet Yorkshire tones:-

“Here’s that Sting cd you wanted to borrow!”