Despite my indifference to dining at the unappetising looking General Election buffet table, I’ll soon be embarking on the short journey to choose a dish that I’ll no doubt find unfulfilling, which will at some point riddle me with indigestion.

Above is a poetic attempt at communicating my imminent departure to vote in the UK General Election. It also reveals my complete lack of enthusiasm for the task in hand, due to the uninspiring options available.

I liken the contemporary ballot box selection of our political leaders akin to enduring the ancient judicial practise of trial by ordeal. A cruel method of concluding the guilt of the accused, guided by how they responded to painful, often dangerous practises.

For example, on occasion, guilt of witchcraft was established by submerging the accused in a river. If they floated they were found guilty, as it was decreed they must have used sorcery, so were put to death. If they stayed submerged they were deemed innocent; unfortunately on many occasions they drowned anyway.

I realise that drowning a suspected witch is far more barbaric than our electoral process. The parallel I’m attempting to make is that trial by ordeal was a ‘no win’ situation, which often feels the case these days choosing the party you want to govern.

I’m going to cast my ‘X’ on a ballot paper today for no other reason than I strongly feel I shouldn’t waste the vote. A privilege I wouldn’t have had if not for the efforts of many thousands of brave citizens. Men and women, who over a century ago, fought to gain a voice on who governed them.

With this in mind, I will always furnish the ballot box with my preferred party on General Election day. The only time I possibly wouldn’t is if my in-laws house was the polling station. Thankfully, they live around ninety miles away so that scenario is unlikely to occur. 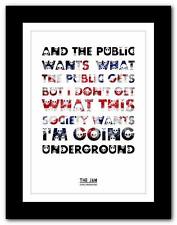 One good thing, at least I think I know who I’m going to vote for now, which is more than could be said 24 hours previous. I’ve also decided on which socks, undies and t-shirt to wear for my sojourn to the polling station. Saying that though, I’m still unsure which sweater and trousers I’ll adorn.

I’m not sure if anyone fought directly for my right to choose the trousers I wear. If they did, though, I promise not waste the privilege they so valiantly struggled to achieve. To clarify, I am clothed while penning this monologue, I’m acutely aware that no one in history has fought for my right to sit b*ll*ck naked at my living room window without sanction….. Although, naturists may beg to differ!

Anyway, I think it best I move swiftly back to the topic of the General Election!

Realistically, unless the election results in a hung parliament, tomorrow our government will be lead by either the candidate in the  blue corner (Theresa ‘Cut to the bone’ May), or the pugilist in the red corner (Jezza ‘Deep Pockets’ Corbyn).

As a northern chap who’s lived the majority of his life in areas that were/are predominantly Labour heartlands, my natural inclination is to support the red team. That being said, though,  I’m don’t advocate blind loyalty, so need to understand what Labour will bring to this so far unappealing buffet table.

I abhor the cynical public service cuts undertaken on the Tories watch, however will Jezza’s planned fiscal strategy, spending shed loads of cash we don’t have, bear fruit? If so, will the shape of the fruit be pear shaped, or that of a four lemons jackpot for the UK.

Can we trust the Tories for five more years in charge of the NHS?…… Incidentally, there’s no need to answer that question, it’s rhetorical.

Since I woke this morning, the line ‘You’ll see kidney machines replaced by rockets and guns.’ (from The Jam’s single Going Underground) has played on a loop on my cranial jukebox…… It’s good to know if you ever need political guidance, you can always rely on a subliminal message from Paul Weller!