I’m contemplating ridding myself of facial hair. It’s started to itch like hell and my wife recently liken me to Catweazle’s scruffier brother; and that was before I’d even grown this full beard.

I personally see my increased facial hirsuteness as the unconventional move taken by lots of creative individuals. A strategy displaying to your peers that you don’t conform to the ideology of the masses (apart from watching Corrie and anything with Alex Polizzi in, which is apparently allowed under bohemian law).

I like to think the beard is a natural bedfellow to a new maverick side of me that I’d hidden for decades. Exhibiting an enigmatic disposition that cocks a snub at this cruel world, along with saving me a chuffing fortune in razors……. My missus Karen claims my thoughts are misguided, though, instead opining I look like Chewbacca during a full moon! 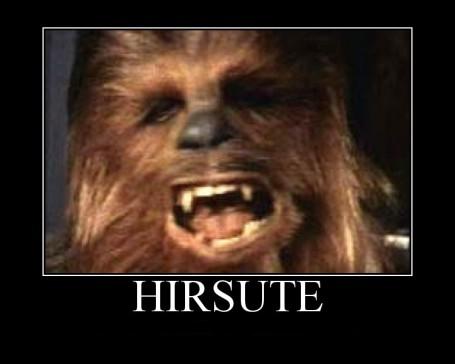 That being said, Karen did give me a compliment earlier while asking to borrow my hat, to shelter her from the Wednesday afternoon solar rays……. Yes, just as I’d started this narrative, she approached me and inquired “Can I borrow your hat please, Gary?”

Ok, I’ll give you that wasn’t a compliment, but she did say please!…… Marginal gains, is I believe how Team GB cycling coach Sir Dave Brailsford labels it.

My adult son Jonny often decries the fact he has inherited my hirsuteness gene, as does his fiancée Jenny who gets the ‘pleasure’ of shaving his back and teeth.

My wife traditionally shaves my back before holidays and visits to swimming baths. It’s not one of her favourite family traditions, but it usurps the six monthly nasal hair cull, along with the three monthly Strachan toenail cutting ceremony.

The toenail cutting ceremony, which takes place annually on the last Monday of January and July, is a formal tradition. During this auspicious event, which takes place with me donning a Strachan clan kilt, a piper plays an accompanying lament as Karen strives manfully to cut my toenails with an electric saw.

Karen, isn’t fond of this centuries old family legacy, although since I agreed to wear boxer shorts under the kilt she admits it’s a slightly more bearable chore. To be honest, I’m also more relieved now I don shorts; going commando in a kilt when there are clipped toenails flying around is bloody dangerous!

When Karen has finished shaving my back, we recycle the hair by giving it to a local taxidermist for use as a stuffing material. My last back shave, earlier this year, gave him enough hair to preserve a giraffe and two hippos. I’m reliably informed, this hair recycling has reduced the taxidermists carbon hoof print by 10%.

Mind you, being very hairy does have some advantages. It allows you to…… errr…….. lets you….. erm…….. Actually, skip that, being hairy doesn’t have any real tangible benefits at all!

Anyway, while I’ve been penning this inanity, I’ve made a decision that I’m going to keep the beard. After all, bohemians in 19th century Paris didn’t let their missus’ tell them if they could wear a beard or not. No, they’d ignore them, refusing to be side tracked from their self-indulgent unconventional lifestyle…… Being French, though, if their paramour withheld their ‘husbandly rights’ they generally did as they were bloody told!