As a middle-age gent somewhat detached from street parler, a consequence of not being down with the kids, I’m occasionally baffled by the social media acronyms that confront me on Facebook, Twitter and Instagram.

The more widely used terms, such as lol (laugh out loud), pmsl (pee myself laughing) and gtg (go to go), aren’t part of my lexilogical knowledge void. However, there are several I encounter whose meaning I’m oblivious to, not without research anyway.

For instance, this morning a friend on Facebook included the letters SMH on a timeline posting. This joined a not inconsiderable list of social media acronyms whose connotation eludes me.

I later learnt it didn’t stand for my initial guess of ‘South Mimms Hats’, instead the writer was conveying ‘shake my head’ to the reader; a disparaging indictment for their klutz like behaviour. 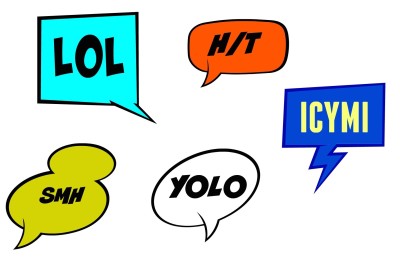 A day doesn’t seem to go by where I’m not confronted on social networks with an initialism I don’t comprehend.

Mulling this over earlier, I had concerns about potential lack of clarity in the sentence contractions I use on social media. I always assumed they were self-explanatory, but it could be perhaps some individuals are unsure of their meaning. As I am with many I encounter.

With this in mind, I thought it would be remiss of me not to elucidate on some of the acronyms I utilise. As they are short and pithy, I suspect you could easily guess the meaning, however in the event you can’t, I enclose their accompanying explanations:-

WTDSCOT – What time does Sainsburys close on a Tuesday?

MAAIFF – My azaleas are in full flower.

DYWBOITV2LN – Did you watch Broadchurch on ITV2 last night?

WCOHFBPBPHDAOUT – Wilkinson’s creosote offer has finished, but paintbrush prices have dropped. Although only until Tuesday.

WCOHFBPBPHDAOUTWTRGPWBL – Wilkinson’s creosote offer has finished, but paintbrush prices have dropped. Although only until Tuesday, when there’s rumours grout prices will be lowered.

WTFAYCMAMTSDYNTM – Why the f*** are you checking my acronym matches the sentence? Do you not trust me?

TTOTB – The title of this blog.

Above are just a subset of the acronyms I regularly utilise on social media networks. As alluded to previously, they are pithy and easy to verbally delivery. I don’t know if they’ll catch on globally but, as they fluently roll off the tongue, I don’t see why not.

A friend, who pronounces the letter ‘f’ as ‘th’ was very complimentary about my capacity for creating easy to use acronyms, describing them as TT (Thucking Thantastic)…… Going off on a tangent – who knows, maybe that could be the origins of the TT in Isle of Man TT motorbike race!

I’m hoping the disclosure of meanings behind some of my social media terms has been enlightening, aiding in some way to your comprehension and enjoyment of my random narratives.

FFTUTIYW – Feel free to use them if you wish.