Over the previous two days, I’ve written of unreliable boyhood memories from the Gateshead Fell cricket club scorebox. Tongue in cheek yarns of my rite of passage from scoreboard operative to the ‘prestigious’ role of scorer for the 1st team.

Within those narratives I didn’t touch on playing the game either within the junior team or latterly with Fell senior teams. The simple reason being I recollect very little about any game I participated in over 30 years of playing club cricket, until I hung up my jockstrap in my mid-40’s.

Hanging up the aforementioned jockstrap didn’t go down too well with my missus, Karen. She had no problem with me not playing cricket anymore, she just wasn’t happy I’d hung the strap in the fridge adjacent to an apple crumble she’d made for dessert that day.

I got quite a few wickets over the years at both junior and senior level, however the only one I can clearly recall is trapping ex-professional footballer Richie Pitt leg before wicket in a Fell 2nd team game around 1980. Pitt (who was representing Whitburn cricket club that day) was a member of the Sunderland side that beat my beloved Leeds United in the 1973 FA Cup Final.

With this in mind, along with the fact he’d kicked lumps out of my hero Allan Clarke throughout the game, it was a wicket that fulfilled me more than any other claimed in over three decades of playing the game.

I suppose if pressed for other playing memories the final season in the Gateshead Fell junior team would be the time I remember with most fondness. There was only one junior team in those days, unlike now when there are various age groups. A time when a team moulded from a core of good young cricketers, who’d developed together over 3-4 years at the club, fulfilled their potential at that level of the game.

The Durham Senior Junior League and two cups were our haul that summer of 1980. Rewards for the hours of netting, along with coaching from senior players. I still have the scorebook from that season somewhere in my loft, probably perched next to the dust covered bag where I store the medals/trophies that are my mementoes from that era.

Despite having that season’s scorebook to prompt my vague recollections, I still can’t remember much from these games. Instead, in today’s narrative I plan to provide short parody biographies of the individuals who made up that successful side. A team I feel genuinely honoured to have been a part of……. In no particular order:-

Godfrey Keefe (Opening batsman/fast medium bowler) – A giant of a lad, Godza chipped in with numerous runs/wickets that junior campaign. Was rumoured to have been 6’4” at birth, a height he has stayed throughout his life, but that’s unlikely to be true. An accomplished imbiber of lager, whose capacity to drink led my liver to take out a restraining order against him, in late 1981.

Michael Healy (Opening batsman/medium pace bowler) – An unassuming, softly spoken, bespectacled left handed batsman. Reliable, steady and like many of the squad made several key contributions during the 1980 season. There was dressing room talk his specs allowed him to see into the future, however, after witnessing the bloody awful shot that led to his dismissal at South Shields, I suspect that wasn’t the case. Was the first person I ever heard use the saying spatial awareness.

Tim Gray (Batsman/Wicket Keeper) – Belligerent batsman, whose big hitting was the scourge of Eastwood Gardens residents living adjacent to the Fell’s ground. Even in away games he could hit number 17’s (old Mrs Troutbeck) drawing room window with his trademark six hits. Also a good footballer who, I think, had trials for Newcastle United. His stumpings contributed to many of my wickets during yours truly’s time at the Fell.

Des Johnson (Batsman/medium pace bowler) – I went through school with Des. An affable lad who called a spade a spade; ensuring you were aware if you incurred his wrath. Like Tim, could hit the ball a long way, also chipping in with important wickets. From recollection Des was also an accomplished football goalkeeper, whose propensity for threatening to chin people who scored past him always enhanced his team’s goals against column. Lived behind Chowdene post office on Low Fell, which was handy if you needed a stamp or a postal order.

Neil Fraser (Batsman/fast bowler) – The team skipper and the brains of the outfit. Although to be honest that wasn’t anything to really boast about. If Benny from Crossroads had have been under 18 and chosen to play his cricket with us, he’d probably have been second brightest team member! Neil was best bowler in the side whose calming demeanour was a steading influence when games were on a knife edge. He’s now incredibly rich and lives in Cincinnati, USA were he bathes in Newcastle Brown Ale and drinks asses milk. Actually, that may be the other way around. I’ll get back to you on that!…. I met up with Neil for lunch in York a few years ago, when we reminisced about the all conquering class of 80 side, and he gave me a guided tour of his wallet. 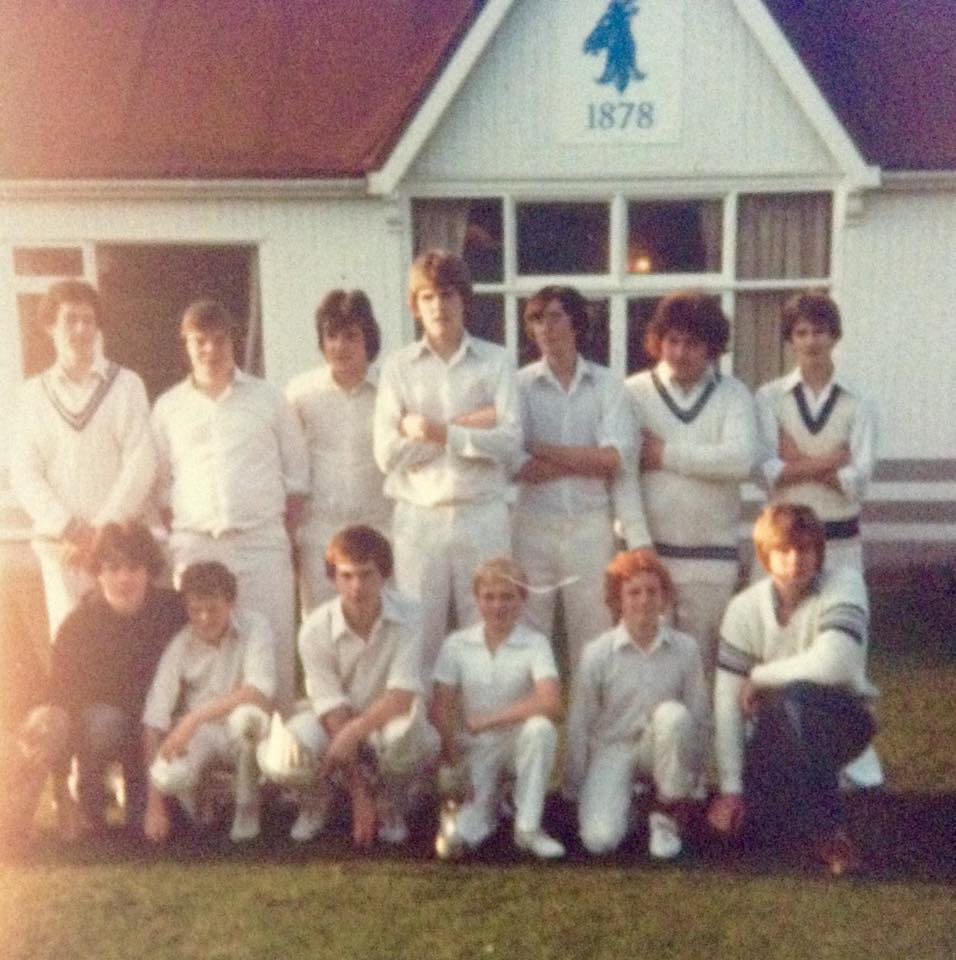 John Hutchison (Batsman/occasional wicketkeeper) – Hutchy stood out from the rest of the team – Not for his cricket ability, but as the only team member who smiled. A behavioural trait frowned upon by his colleagues whose pubescent journeys hadn’t incorporated a stop at a town called Positivity. On one memorable night in our late teens, Hutchy, Tim Gray and me foolishy thought it would be a good idea to pretend we were Australians in a Newcastle nightclub. Unsurprisingly, we got nowhere with any lasses in there, but it wasn’t a total washout for Hutch as the escapade earned him an audition for the part of Mrs Mangle on Aussie soap Neighbours…. A big Sunderland football fan, he wasn’t very happy when I got Richie Pitt out.

Gary Strachan (Wrist Spin Bowler) – Erratic of gag quality and bowling delivery. When he got both of them right they were generally good, when he got it wrong, they both ended up being despatched into Mrs Troutbeck’s front garden on Eastwood Gardens. Had a strange superstitious ritual of not eating toast before he batted, which he found easy to stick to as there is never a toaster in a cricket dressing room. He was also a big advocate of not practising lion taming before he batted, or indeed any other time….. Could be a right shit-stirrer.

Brian Gray (Off-Spin Bowler) – Useful bowler, nicknamed Kipper. who was my spin partner in crime. No relation to Tim Gray, he’s the only junior cricketer I played with who mentioned concerns about getting bingo wings in later life. Brian was an affable guy who, during a rain-induced break in play at Horden, taught me how to whistle the Bulgarian national anthem.

Peter Taylor (Fast Bowler) – Like our skipper, Pete was a top quality opening fast bowler. I can never remember any of my wickets, but the best catch I ever took in club cricket was off his bowling in a league game at Sunderland. Ironically, it was probably off his worst ever delivery (a beamer at thigh height) which was blasted into my outstretched left hand at extra cover.

Gavin Healy (occasional Medium Pace Bowler) – Younger brother of opening batsmen Michael. Although quietly spoken, he was a lot more vocal in the dressing room than his elder sibling. Once brought loads of toast into the dressing room just to try break Gary Strachan’s superstitious resolve. Famed for never using a word with more than two syllables.

Peter Clark (Batsman/occasional off-spin bowler) – Quiet, affable lad who was a year or two younger than the majority of the side. Steady batsman, who rarely let the team down when given the opportunity.

Ian Strachan (occasional Medium Pace Bowler) – Younger brother of yours truly. Blonde of hair, diminutive of stature who went by the nickname of Cheese. The only bowler in GFCC history to take a wicket with a mouth full of jelly wriggler sweets. In later life he spent a period of time in rehab for his jelly wriggler addiction, before moving to the Inner Hebridean island of Rhum, where he now lives as a crofter.

Shaun Dodds – (occasional Medium Pace Bowler) – Like Ian Strachan, one of the younger members of the squad with a strong will to win. The copper topped all-rounder regularly contributing with many useful wickets and runs during that successful season. Shaun fitted in well to the inherent not smiling much culture within the team.

All of the above were the main protagonists in that successful season for the Gateshead Fell under 18 team. There was useful contributors from younger players such as David Kell and David Nunn who made up the squad. Scorers and coaches from the 1st team also played their part in this team effort. Not forgetting the minibus drivers for away games, Doug Hudson, Tony Tait, Jimmy Devenport and my old man (Malcolm Strachan).

If I’ve missed anyone I apologise….. Apart from our Ian, Neil, John Hutch and Godza I haven’t seen any of those lads since I left the north east of England over 30 years ago. Hopefully they have achieved success in their chosen fields, but if not I’d urge them to speak with Neil Fraser who might lend them a few quid. 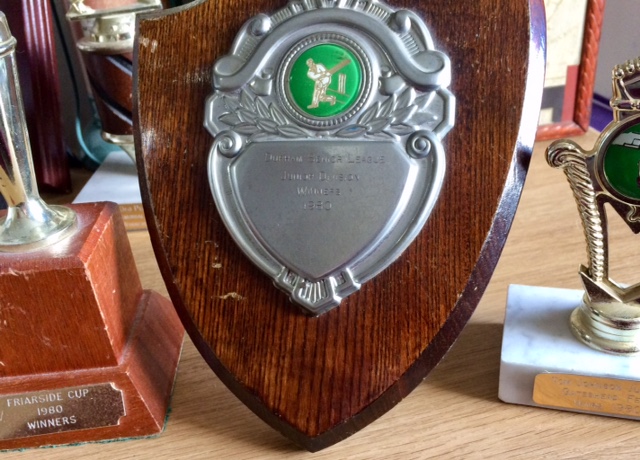