Causing devastation in her wake, the high maintenance Immy’s attention seeking ensured her hissy fit received nationwide recognition, via numerous TV news appearances……….. All this because her hubby Ian wouldn’t buy her that little black number from Harvey Nicks!

On witnessing her destruction twelve months ago, in addition to my feelings of sympathy for her victims, I recall wondering just how these storms were named.

After extensive research (three minutes on google), I discovered that the Met Office and Met Eireann use an alphabetical list of monikers chosen by the British and Irish public.

As a distraction from having their roof tiles blown off onto the car bonnet, or a displaced fence panel flattening your prize roses, both meteorological centres invited the public to provide names for the UK and Irish windstorms. 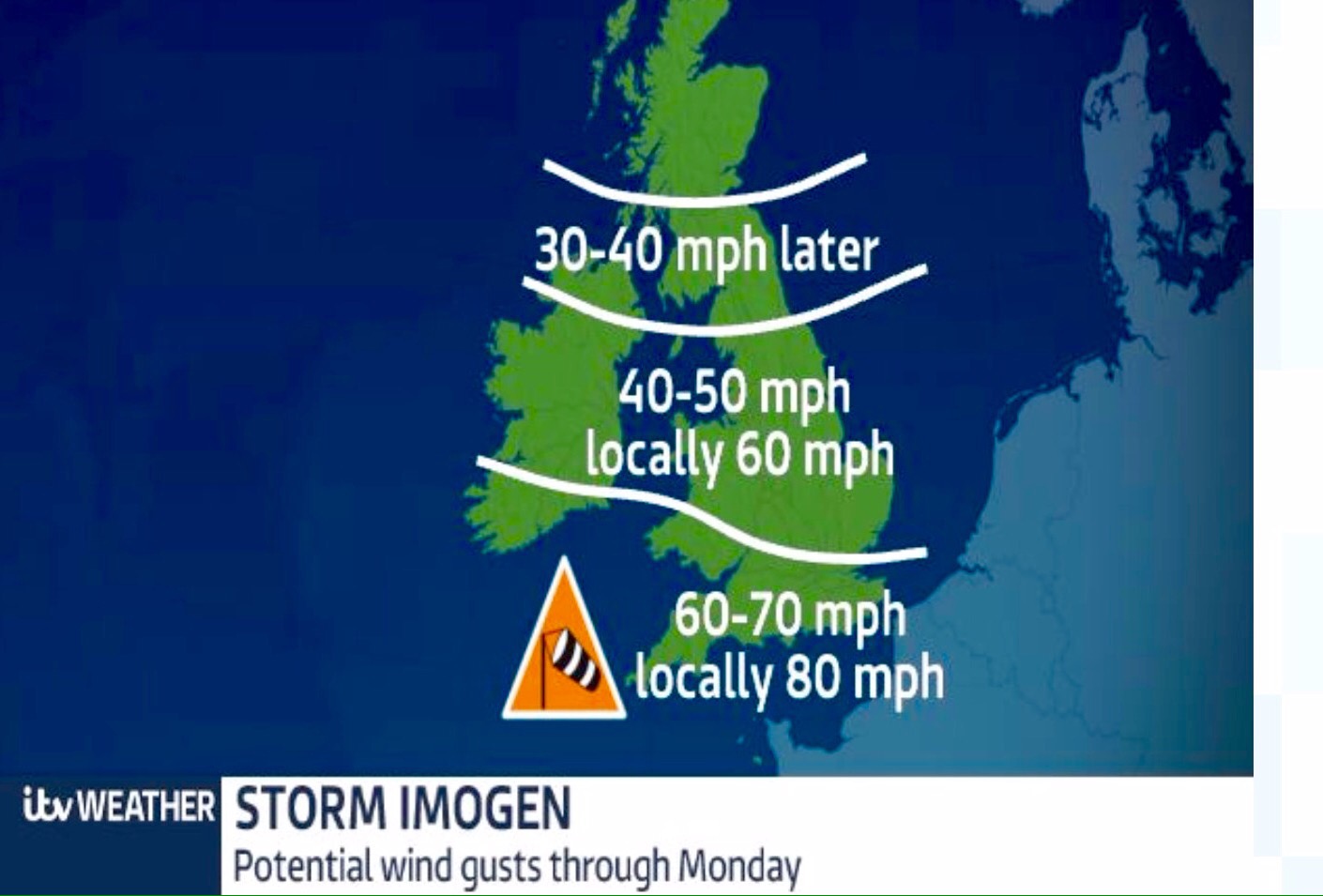 I have to admit, I was slightly disappointed to learn of the underwhelming manner in which these forces of nature had acquired their pseudonyms.

I’d hoped the name was the consequence of a heated argument by the proud parents to be, Frank from the Met Office and Siobhan from Met Eireann.

The moniker chosen during a conference call between Frank in London and Siobhan in Dublin, which played out something like this:-

In a cavernous Met Office conference room, Frank slouches at the imposing table made from the souls of people oppressed by capitalism. Each blemish on its pitted surface the result of a Third World carpenters tears. Apart from the carving that mooted ‘Frank is a dickhead”, which had been mischievously engraved by Terry in Admin.

The equatorial heat in the room, exacerbated by the air conditioning being set at gas mark 6, ensured Frank perspired uncomfortably in his cheap suit, which had seen better days…… Not many better days mind you, as it probably started fraying as he walked out of his tailor’s shop.

The early fraying a result of the suit receipt rubbing against his lapels in the bag. Frank concluded that it wasn’t a good idea for his tailor to print his receipts on heavy duty sandpaper.

Meanwhile, in a much smaller Met Eireann conference room Siobhan sits chewing a pen. Her mind racing with ideas of how she can outsmart her English colleague in the upcoming conference call.

Although both delighted about the revelation of a new arrival, they previously had been unable to agree on an eponym for the forthcoming storm.

After dialling Siobhan’s conference number, in London Frank bends his neck slightly to edge closer to the microphone on his conference phone.

Feigning strong influencing skills, Frank attempts to lay down the law by confrontationally advising the thirty something Irish woman “We’re calling it Louise after my dad!”

“No way!” Siobhan stubbornly responded in a melodic but firm Irish lilt.  “No storm of mine will have an English name. Anyway it should start with an ‘N’ and I want to call it Niamh”.

“You’ve got to be winding me up! It’s spelt Niamh but pronounced Neeve…… I want our storm to at least have a moniker that is spelt the same as it’s pronounced!” a forceful Frank countered.

Before, in a more conciliatory tone, questioning “What do you think of Norman, after my uncle Bernard?”

“I don’t mind the name Norman per se, but it would remind me of the bumbling actor Norman Wisdom.” Siobhan wavered for a moment.

“Well the storm would cause mayhem in its path, in the fashion of the endearing late klutz Mr Wisdom; so it would be pretty apt, wouldn’t it?!” argued the Englishman with tongue firmly lodged in cheek.

After a couple of hours deadlocked with no compromise in sight for the intransigent duo,  a thawing in the meteorologists chilled relationship.

“Look, I think we need to compromise here, Frank, or we will be here all day!” the red haired Dublin girl suggested, luring her colleague into a false sense of security.

“Right then, Niamh it is!” Siobhan exclaimed and hastily pressed the ‘call close’ button on the conference phone, closing the meeting.

She then rose from her chair and headed toward the door of the conference room. As she got to the door she gave a self-satisfied smile, before opinions to no one in particular  “Fecking English eejit!”

Over in London, Frank shrugged his shoulders causing one of the sleeves on his poorly made jacket to fall to the floor. As he picked up the errant piece of cloth he consoled himself, muttering to himself “Ah, never mind, it’s only a name”.

He then departed the vast conference room to deceive his boss he’d decided on the name Niamh and told “that Mick bird” she can like it or lump it!

Personally, that’s how I want my storms naming. So as you’re apparently very keen for the public’s input, take heed Met Office…… Oh and from now on, can you please begin storm names with the letters Q, U, X, Y and Z!

We know you omit them for uniformity because our American cousins don’t use them. However, if they told you to jump off a high building would you? ……. What do you mean “Aaaarrrrgggghhhh!”

Why can’t we have a Storm Quentin, a Storm Ulysses, or a Storm X-Box?!…… Well, apart from the fact they’re too camp, too Greek mythologyish and too advertisy.

I know two of the words in the previous paragraph don’t exist, but my poor spelling and grammar doesn’t seem to have stopped you reading this narrative so far……. Oh, you stopped half way through the conference call monologue!