Yesterday afternoon my wife and I ventured to the Leeds General Infirmary, visiting a family member (for anonymity I’ll call Arthur) who is currently awaiting a surgical procedure.

During our visit, the surgeon advised the work he’s undertaking is a major operation, one requiring a steady hand and meticulous care. That being said, though, he is confident he’ll not be so slapdash as to set off the buzzer resulting in Arthur’s nose flashing red.

There’s an adage proclamating that people say the strangest things; a mission statement I’ve adopted for my website garystrachan63.com (writesaidfred.org). It’s not brilliant, but it’s more meaningful than the old one of ‘Have you seen my slippers, Karen?’

A perfect example of the adage took place in the elevator up to Arthur’s ward, after the lift announcer advised we were stopping at Level D. An elderly woman stood next to me at the time asked “Did she say we are stopping now at Level E?”, to which I responded she hadn’t and not to worry.

After the doors shut and we headed towards Level E, the announcer made lift occupants aware of the next floor destination. The elderly woman nudged me to exclaim how loud the announcers voice was. I smiled back at her, but all the while musing to myself “Well she can’t be that bloody vocal, you couldn’t hear what she said a little earlier!”

Of course, I’m not ignorant enough to voice those musings out loud, but the irony of the incident manifested thoughts of the above adage.

Arthur wasn’t in great spirits on our arrival at his ward. I suspect tiredness from pain induced insomnia, along with now having to endure a couple of hours of me arsing around, would have been contributing factors.

He often complains about my inane questions, but I think it’s important to understand facts like if he’s ever balanced a kebab on his head, and what his favourite junction on the M1 motorway is. Silliness he ordinarily treats with the contempt it deserves.

Saying that, though, he did respond positively to my request of “Talk me through the bowling hat-trick you took in your 20’s dad.”

Despite taking many wickets over the thirty years I played club cricket, I never achieved a bowling hat-trick. For the uninitiated, a bowling hat-trick is taking three opposition wickets in consecutive balls. During my career, I’ve taken two wickets consecutively on numerous occasions, however that hat-trick always eluded me. 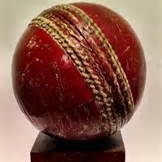 I’ve scored hat-tricks at football as a kid, but apart from that the only other hat-trick I can brag about is the time I made a white dove magically appear from my trilby. I don’t know who was more surprised, me or the dove, as I wasn’t undertaking magic tricks at the time.

Arthur likes to remind me of accomplishing the cricket bowlers holy grail in his younger days; although he never previously talked me through the whole over. With this in mind and spurred on by my earlier question, he decided to fill that cricket anecdote void.

With me sitting awestruck on a chair beside his hospital bed, this is how the old man described that famous over in the late 1950:-

7th ball – (Extra ball for the wide he bowled 1st ball) – Half volley which was despatched to the boundary for four runs.

One thing I took from Arthur’s sporting yarn was, if I were him, I wouldn’t brag too much about this hat-trick over. After all the first and last balls sounded a right load of sh**e!

I faced the old man’s left arm medium pace deliveries on numerous occasions in my youth. Some weeks, a rare fit of teenage enthusiasm led me to train on a non-practise night. With no players training on a Wednesday, Arthur would volunteer to drive me up to Gateshead Fell cricket club to net with me. Along with taking the opportunity to mention once again he’d taken a chuffing hat-trick!

In the nets, Arthur would face scores of my left arm wrist spin deliveries and throw down numerous of his medium pacers in return. Due to a cacophonous ringing noise when he ran in to deliver the ball, batting against him could be quite distracting.  This din emanated from his trouser pockets, the result of jangling keys and coins moving in symmetry with his run up.

It was similar to the sound of a cat bell fitted by it’s owner to warn birds of danger. During these training sessions, Arthur’s jangling run-up proved highly successful at frightening birds away from the newly grass seeded areas of the pitch, making him a popular figure with the groundsman.

Despite bowling accurately with a good action, when I faced him I couldn’t help but think to myself “How the heck did this bowling achieve a bloody hat-trick!”…… Only kidding Arthur, you were a steady bowler and accomplished something I never did. It is with pride I raise a glass to you and that special cricketing achievement!