Thirty three years ago today US entertainer Andy Kaufman passed away at the age of 35 after losing his battle with lung cancer.

I pigeon holed the late Long Islander as an entertainer as apparently he didn’t like being classed as a comedian; evidently his preference was to be categorised as a ‘song & dance’ man.

I’m not sure why I’m worried about upsetting Kaufman. After all it’s not as if he is going to read this, unless wherever we reside in the after life has internet access.

Even if they have I’m sure he’s got more pressing things than my blogs to occupy him; such as chess with late former Taxi co-star Jeff Conaway, or a game of Top Trumps with Humphrey Bogart.

Due to conflicting thoughts at what I believe spiritually, I never know which moniker to bestow on the destination of the after life.

I was brought up a Christian, but is there really a heaven and hell? If there is, when my time comes which one will be my domicile for all eternity? Will there be a dress code? Not to mention, if we get a uniform can I opt for darker colours as light ones add 10 pounds in weight on me?

This uncertainty leaves me cautious about applying a label to the place(s) we move onto when we leave this mortal coil. I like to envisage we go to wondrous place where anything you so desire is at your fingertips….. A magical place not unlike Sainsburys supermarket, only with ‘in date’ coleslaw.**

I just hope they redeem Nectar points there, as I’d hate to spend years saving up my points for a large purchase only to die before I’d redeemed them.…. Note to self – Cash in Nectar points next time you’re in Sainsburys’, just in case.

Anyway, back to the main subject of this narrative, Andy Kaufman.

If truth be told, I’ve not seen a great deal of the guy’s work. I know him mainly for his comedic (am I ok using comedic, Andy?) Foreign Man stage character. A popular act that later evolved into his Latka Gravas role on the TV comedy Taxi, which ran from 1978-1983…….. I just hope the cab clock wasn’t on for that length, or I dread to think what the fare would have been!

The winner of 18 Emmys, Taxi not only enhanced the resume of Kaufman, but also co-stars Danny DeVito, Judd Hirsch, Marilu Henner and the aforementioned Jeff Conaway, to name but a few. 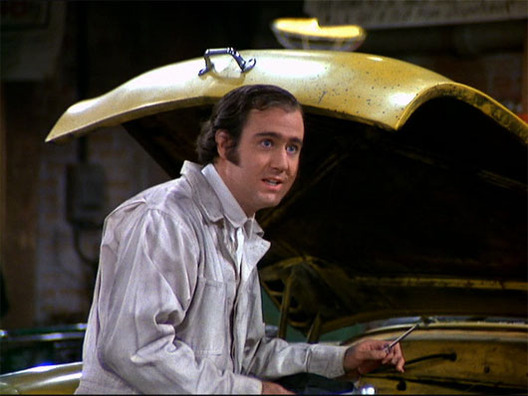 Andy Kaufman made 79 appearances in the 114 shows recorded. His portrayal of the pigeon English speaking mechanic, from an unnamed foreign country, receiving plaudits from viewers and critics alike.

Despite the characters popularity, it’s alleged the relationship between Kaufman and the shows makers was not a marriage made in heaven…… Or indeed that Sainsburys’ like place I mention above.

He is said to have disliked TV sitcoms and was labelled as disruptive by some of the team. An allegation later refuted by one of the shows main writers Sam Simon.

Evidently, his insulting of Taxi co-stars during the 1979 Golden Globes is said to have incensed Jeff Conaway so much that he decked him.

Incidentally, when I say decked him I mean punched him to the ground. Not that Conaway had covered him in wood strips to look like a patio.…… That would be ridiculous.

That being said, there are rumours the enigmatic Kaufman faked his own death; maybe he has been hidden under a decked patio for 32 years!

Andy Kaufman took comedy and performance art to the edges of irrationality and blurred the dividing line between reality and imagination. Or so I was told this morning during a provisions shop at Sainsburys……. I wouldn’t care I only asked the sales assistant the tinned ham aisle!

In addition to starring in Taxi, Kaufman appeared in several TV shows and movies, performed a one man show at Carnegie Hall, enjoyed a brief professional wrestling career and performed in concerts nation-wide.

In 1999 a biographical comedy drama depicting his career was released, a movie in which he was played by Jim Carrey……. I’ve not much else to add to that, other than I provided this detail should you receive it as a big money question on TV show Who Wants To Be A Millionaire.

On this day 33 years ago an innovative and eccentric performer/writer was taken from us far too early…… A sad day in many ways, although on the plus side apparently he did get to redeem his Nectar points before he went!

**Disclaimer – Sainsburys coleslaw is always ‘in date’ and is lovely in a sandwich with cheese.