Yesterday, whilst sitting with my old man in his hospital room, thoughts of the old comic farce movies like Carry On Matron and Doctor At Large made an unscheduled visit along my neurological corridors.

I’m not sure why this epiphany arrived unannounced; perhaps it was the fact my dad was moved last week and he is now nearer to the women’s wards. That being said, Mally is currently in no fit state to make clandestine overnight visits with the ghost of Sid James checking out the aged ‘talent’ in adjacent rooms.

Also out of the equation, chasing a young nurse around the wards, Benny Hill style while a fellow patient slaps his baldpate. Walking is a struggle for him at the minute, never mind running after nubile medical workers. Not that he would if he was healthy enough to do so.

My old man is a gentleman. He treats people respectfully, shunning the misogynistic messages painted in bawdy farcical comedies, such as the 1960s/70s ‘Carry on….’ genre. Don’t get me wrong, he found the films funny, he just chose to avoid mirroring the lewd behaviour of these fictional characters. 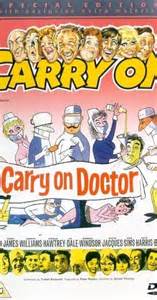 I have to admit I was influenced by the images within the brash storylines of these movies. As far as the young Gary Strachan was concerned, all hospitals in the UK had a rotund harridan (akin to Hattie Jacques) as matron, a cantankerous senior surgeon like James Robertson Justice, along with a nervy klutz of a junior doctor similar to Jim Dale’s portrayal.

Life in the wards and surgical theatres, as understood by this naïve boy, was an environment of middle aged male patients seeking a fling with the pretty ward nurse. Roles ordinarily filled those movies by the likes of actors Sid James, Kenneth Connor and Bernard Bresslaw.

James, I assume, cast as the perennial lothario on his confident demeanour not his looks, which I once heard described as being “….. like a clumsy beekeeper!” This genre of movies, influenced by the lewd post card humour so loved by the British public, inferred girls were easily attainable. This regardless of your patter, or how many times your visage had been stung by a bee……. Something I later learnt to be absolute nonsense.

So, as I alluded to earlier, my pater’s focus will be purely on his recuperation, not aping the antics of misogynistic geezers living through a mid-life crisis.

When we visited him today, it was heartening to see him in better spirits after a better sleep. Although, he was quite disturbed to wake up in a nurses uniform, which he categorically denies adorning when he fell asleep the previous evening.

Progress has been slow, but there were improvements today, which the medical teams and the Strachan clan were encouraged by. As a result, Mally’s behaviour was less cantankerous, although my mum mused he seemed more interested in listening to Elaine Paige show on radio than our sparkling conversation. She may have been right, but it was a real fillip to see the proud Yorkshireman appear more like his pre-op disposition.

Today, we left Mally after a hour and a half visit in much better spirits ourselves. On departure we hugged him, put the rugby on the radio then as we headed for the door, my mum exclaimed “Malcolm, is it not about time you took that bleeding nurses uniform off!”