This morning, I met a Strachan relative for the first time since the early 1970’s. The gent in question being my dad’s cousin whose father and my grandfather were brothers; two pranksters, blue of eye and mischievous of smile.

He (Steve) knocked this morning at my front door as he’d been to my neighbour Mike’s house to quote him for a decorating job. To clarify, as my dad had provided the number for my neighbour, Steve knew a blood relative lived in this house. He didn’t stumble upon his first cousin (once removed) by the act of randomly wandering around Leeds knocking on doors in search of long lost members of his brood…… Or not that I know of anyway. 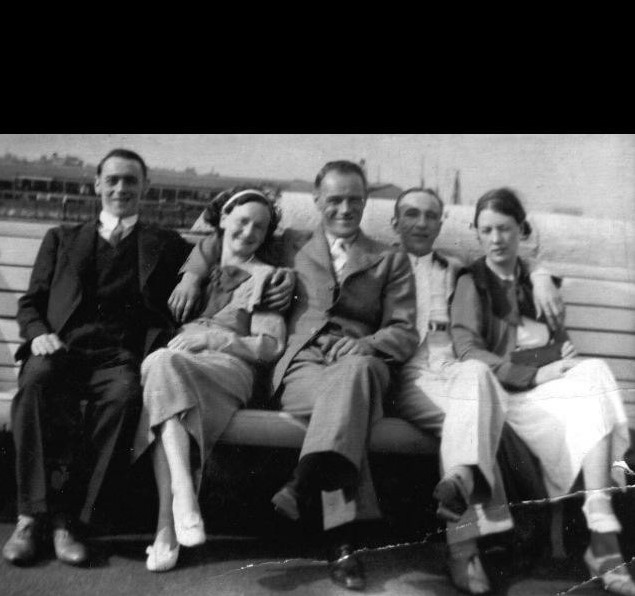 Bearing the same broad grin of my granddad and my son, I was transported back to a time when Billy Bremner was king, the UK had the wherewithal to win the Eurovision Song Contest and you could buy a ha’pputh of slack for a tanner…… No, I don’t know what the last one means either, but my wife’s dad says it so it must have some basis in fact.

It was great to reminisce with Steve, with yarns of my granddad and his old man’s antics. Being ten years older than me and living locally to them both (we’d moved to Gateshead then with my dad’s job, in the era we discussed) I became acquainted with a few tales of which I was previous unaware.

Amongst them, a yarn of his dad conning a lad into drinking white emulsion from a milk bottle as retribution for him downing all of the previous days pinta. There was also memories of my granddad mischievously taking his own sandwiches to a fancy restaurant.

I also learned of my forefather’s habit of, pre-Sunday visit to the pub, leaving his car running in the middle of the road, doors open and key in ignition while sat waiting in his brother’s living room……. Meaning, at last I know why my granddad seemed to get a new motor every other week, along with the reason his car insurance premiums were so chuffing astronomical.

Ordinarily, if I have house guests they tend to proffer “Is that the time?…. I best be getting off as Judith wants the car.” whenever I bring out old family photos. It’s a bizarre affliction all my family and friends seem to acquire when at chez Strachan. This inexplicable phenomena also seems to affect the victim’s memory as some of my guests didn’t even bring their car, or indeed have a partner called Judith.

Thankfully, my pater’s cousin wasn’t stricken by this strange experience, sitting for a while looking at old monochrome picture of our ancestors. I didn’t even need to use the restraining jacket to stop him running off!

It was a great fillip to see a family member after such a long time. It was like looking at my granddad in the early 1970’s, particularly with his affable demeanour, smile and blue eyes.

Right, I’ll bring this to a close now as the ancestral sojourn down memory has whet the appetite to revisit further photographic memories……. Hold on a minute, my wife’s just driven off in the car…… What’s this note on the side say?:-