Although not officially autumn until 22nd September, there was a noticeable autumnal chill yesterday evening in West Yorkshire.

It’s looking more and more like the meteorological gods aren’t going to bequeath the UK with anything remotely akin to summer weather in 2017. It’s citizens perhaps not even deriving the consolation of an Indian summer….. Well, unless they travel to India in the next few weeks.

I can’t help but ponder that if these changing meteorological conditions are the consequence of global warming, has the phenomenon really been given an apt moniker? Would it not be more accurate to label it as ‘global always p***ing it down’ or ‘global you’re gonna need a brolly if you go to Roundhay Park’?…… It’s got to be said, I’ve seen very little evidence of warming this season.

In my late teens I was somewhat desensitised against feeling the cold; the consequence of freezing winter evenings drinking in Newcastle city centre clad in just a t-shirt. Now though, in the full throes of middle age, my ‘put the heating on if it goes below 20C’ gene has kicked in, meaning I can no longer effectively tolerate low temperatures.

To clarify, when I wrote clad in just a t-shirt above, I meant on my torso; I was wearing trousers, undies, socks and shoes on my lower half. Essential adornments in avoiding arrest, not to mention frozen bosker browns during wintertide pub crawls on the Newcastle Bigg Market.

There were very stringent dress codes for Newcastle pubs in the early 1980’s. For us chaps, if anything other than a t-shirt adorned your upper body you were deemed a ‘soft sh!te’ and barred from the tavern until you ‘grew a pair’.

An acquaintance, who on a particularly cold evening was denied pub access for wearing a jumper, mistook this instruction as he had to ‘grow a pear’ to secure future entry. Despite not understanding what relevance fruit cultivation had to public house access, he bought a pear tree. It turned out to be a flawed strategy though as the biting cold killed it! 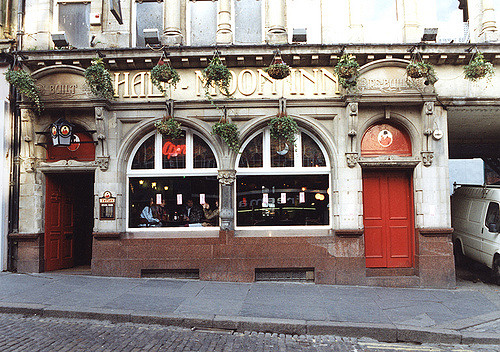 Another insistence of Bigg Market pubs in the early 80’s was that you had to have a moustache to gain entry into their establishments. As testosterone deficiency made it difficult for women to adhere to this rule they were given special dispensation. Having to substitute lack of facial hair by donning a caterpillar on their top lips for pub access…….. Although if the caterpillar wore a jumper or coat they wouldn’t be allowed in.

Another conundrum for the caterpillar adorning lasses was in summer, when they morphed in butterflies (the caterpillars not the girls) and flew off in the middle of a summer evening out. Subsequently leading to their unceremonious banishment.

One establishment had a zero tolerance policy when it came to it’s punters dress code, with even t-shirts being stringently vetted at the door. Anything written on the item of clothing had to adhere to their codes of decency. In 1982, a mate fell foul of their pedantic rules when his ‘Who you staring at, you fat b*****d?’ t-shirt was bafflingly deemed to be inflammatory.

It’s thirty years since I lived in the north east, but I get up there to see my brother and friends a couple of times a year. That being said, I’ve not drank in Newcastle’s Bigg Market for three decades, as such I don’t know what the dress codes in the taverns of that famous square are now. I suspect, though, there will be significantly fewer moustaches and caterpillars on show.

One thing I know is that these days I couldn’t go out on a winter evening in Newcastle with only a t-shirt on my upper torso; especially with the contemporary influence of ‘global freezing you bosker browns off’.