Procrastinating on a cloudy afternoon, my missus and I enjoyed a second show in five days at the York Grand Theatre, on Wednesday. Our entertainment provided by the cast of the show Sunny Afternoon, a musical story conveying the formative years in the 1960s of the band The Kinks.

On Saturday our entertainment was courtesy of the saviours of soul The Commitments; yesterday Ray Davies’ back catalogue of working class anthems provided the enjoyable 2.5 hour musical distraction.

Before we left the matinee show to venture into a North Yorkshire sunset, the Sunny Afternoon performers really got us going with a mixture foot tappers and slower classics from the quill of Davies the elder..

Amongst those was the story of Lola. This before she became a showgirl with yellow feathers in her hair and a dress cut down to there. In those days it wasn’t the Copacobana club and Tony that held Lola’s attention; when Ray Davies knew her in the 60s it was a North Soho drinking establishment.

The tale told of the signing of a first record deal with three managers and a publisher all on 10% commission each.

The audience were bequeathed the story of Ray Davies ambition and genius as a songwriter, his brother Dave’s womanising, boozing and unpredictable behaviour, bassist Pete Quaife’s unease with stardom and drummer Mick Avery’s intolerance to Dave Davies.

The narrative spoke of the irony at the band with a socialist mantra being prohibited from plying their trade on a first foray in the US because of clashes with the unions. Everyone wanted their piece of the gravy train fuelled by the creative artistry of Davies the song. 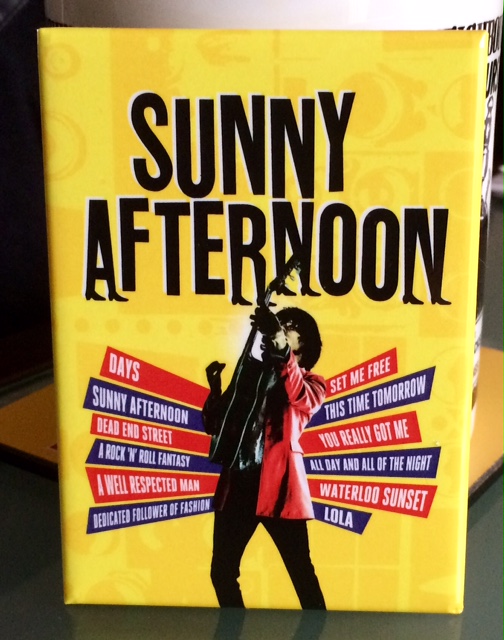 Through the medium of song and dialogue, the viewers journey also touched on Ray Davies extra desire to make the most of his gift. A tribute to his sister who’d presented him with his first guitar shortly before her premature death.

“I didn’t realise how many great songs Ray Davies had written!” my wife proffered, after the show had concluded with a ‘mash up’ of hits Lola and All Day and All of the Night.

Even though she was unspecific, I assumed she meant The Kinks and not an insipid contemporary act spewed unceremoniously from the Cowell Conveyor Belt. The sort of acts who were ironically lauded yesterday evening in the 2017 Brit Awards ceremony….. Obviously David Bowie and George Michael aren’t included in that slight.

It was refreshing to spend the afternoon witnessing ‘proper’ classics from the pen of a creative genius, performed by accomplished musicians.

Watching the Brits on TV in the evening set me off on a middle aged rant. During which I grouched, to anyone who’d listen, how far the quality of British music has diminished in the last 50 years.

Will a musical showcasing the work of this generations reality show fodder pack out theatres half a century hence?…… Who knows!….. Who cares!…… The Who Live at Leeds!

I’ll probably be pushing up the daisies by then. If not, I’ll be too busy trying not to pee myself by any sudden movement to worry about it.

Despite the distraction of the actor playing drummer Mick Avery looking like the crystal meth distributor Badger from TV’s Breaking Bad, Sunny Afternoon was thoroughly enjoyable.

I know it was enjoyable because Karen said it was!……… That was bestowed upon me shortly after she’d conveyed that “I didn’t realise how many great songs Ray Davies had written!”

If it hadn’t have been value for money, she would have made sure I knew!…… That is following rollocking the shows drummer for his irresponsible actions while dealing for Walter White and Jesse Pinkman.