On Monday afternoon, while Karen was undergoing an MRI scan, I interspersed people watching with writing prose in a waiting area of the Bexley Wing, Leeds.

The sonnet was written in a deliberately pretentious style, for which I make no apology. During this poem I made mention that St James (the name of the hospital currently in situ) was the son of Zebedee, taking my mind on an unplanned sojourn into the domain of 1960’s/70’s kids TV show The Magic Roundabout.

Every evening at around 6pm in the early 1970’s, my siblings and I would hear the words “It’s time for bed!” An authoritative almost regimental order barked from a head perched on a spring supported torso. To clarify, neither of our parents were the source of this command which wasn’t directed at us.

I can honestly say I’ve never seen either of them relying on spring power to aid their mobility around the house.  Or indeed outside!…. My mum could be highly strung at times when we were kids, but never highly sprung.

No, the perpetrator of this order was a puppet jack-in-the-box called Zebedee. At the conclusion of each episode of The Magic Roundabout, he used his cajoling catchphrase to encourage Florence, Dougal et al to venture to the land of nod.

Even though he wasn’t the parent or guardian of any of the other characters, the reverence he was held in meant his command was obeyed without question.

Delivered in a style of “Ok kids, you’ve had enough excitement for one day. Now get to bed so Dylan and me can watch Kojak!”, the self styled leader of the bunch commanded great influencing skills over his none sprung friends.

Incidentally, Dylan was a puppet rabbit who adults proffered seemed under the influence of soft drugs. Kids we were oblivious to this, until Dylan entered The Betty Ford clinic in 1978 when consequently the stoned rabbit was written out of the show. 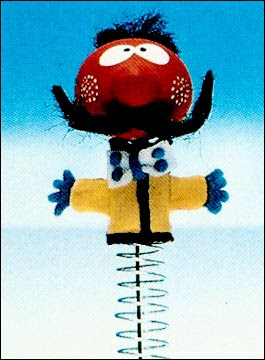 In addition to my epiphany on Monday, I thought of the phrase “It’s time for bed!” as I looked outside at my back garden earlier this morning. A metaphor for the commencement of autumnal plant and shrub demise.

Although still displaying a cornucopia of colour, the plant sources of this aesthetic beauty have clearly embarked on their journey of decline. The start of autumn signalled by the onset of deciduous leaf colour changes and the commencement of perennial plant hibernation.

The perennials will spend winter below ground hibernating from frost, the long dark nights and family’s bickering about whether they should watch X-Factor or Strictly Come Dancing.

They will bide their time until spring (not Zebedee’s) dawns it’s 2018. In their sanctuary of soil, the aquilegia are holding Christmas dinner this year.

The euphorbia will not be joining the clematis, poppies and ‘Forget Me Nots’, though, after his invite was withheld following last years drunken pass at the sedum. Tinkering with nature is heavily frowned upon amongst the chambers of mud beneath my garden borders.

It will have to stay home sipping on a glass of stout or a snowball watching Home Alone 2 and snacking on Twiglets. I don’t ordinarily approve of disharmony and marginalisation of plants like that, however in the case of the euphorbia I concur the ostracisation is warranted.

The diminishing colour and foliage that adds charm, elegance and a relaxing ambience dans mon jardin will be sorely missed by Karen and I. Between March and August this small plot of land is our sanctuary, providing immeasurable therapeutic qualities.

Nature is a wonderful thing, apart from flatulence which unfortunately sticks around throughout the year, not unlike the leaves on the pyracantha bush in the opposite border.

Anyway, I needn’t rue the dwindling looks of my garden just yet. It’s loss of colour has only just started. It’ll be a few more weeks before it loses its assuaging qualities.

I enclose the aforementioned sonnet below. Penned mid-people watch in a waiting area within the oncology institute at the heart of Burmantofts, Leeds:-

Chamber of lingering, institution of the afflicted

Minions of Zebedee’s son challenged when “Time for bed”

Roundabout the only domain where magic succeeds

Wing of Beckett, medical domicile of those in dotage

Bexley Wing, oncological state of the art, gallery of art

No T-Rex skeletal displays; they darn sarf among streets of gold

My second home, sadly not in Hamptons; on plus side there’s no rent.