Recently, through a variety of media channels, there has been a big drive to raise awareness about mental health. Within these campaigns, there’s been a particular emphasis on educating sufferers that it’s okay to chat about their debilitating nemesis. This strategy seen as an important step in reducing the number of people who suffer in silence.

I’ve written previously of a close friend with enduring mental health issues, who has spoken to me about the positive benefits he’s seen by adhering to this very approach.

Yesterday, I spoke to this guy (for the purposes of anonymity I’ll call Granville), where I broached this campaign which encourages sufferers not to be afraid to open up about their oft stigmatised illness.

On asking him his opinion on this recent drive, he responded “Good idea.”…… Despite the accuracy of his reply, as I’d asked an open question, I was hoping for a more in depth answer from Granville.

Over the years I’ve learned he’s a guy with many personalities, it’s a matter of tailoring conversations around his behavioural changes, while remaining supportive. As the lad holds great store in the recuperative powers of humour, these multiple personalities are predominantly affable.

He means no harm to anyone, but his judgement can be clouded at times. During these occasions his decision making processes aren’t always the best and can exacerbate his condition.

One of his personalities thinks he’s head of the Welsh Tourist Board. When driven by this character, Granville acquires such a persuasive sales technique he recently convinced me to splash out on a weekend B&B break in Rhyl, along with procuring a ticket for the Llanelli Flower Show.

That was of course fictional, but his illness and capricious behaviour are very real.

Ordinarily, he is prepared to talk about his illness. His reticence to chat, along with his attempts to sell me tickets for Cymru based tourist attractions, are rare. 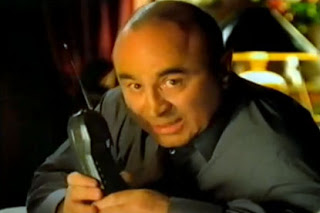 Granville does advocate that getting things off his chest can be remarkably helpful, even if it’s only short term respite. I asked if his brother was of much help, but forgot he didn’t have a brother.

Apparently, he does chat about his woes to his dog Arnold. This isn’t generally helpful, though, as halfway through the tale Arnold generally wanders off, only to return a few minutes later with a bag of ‘Mrs Troutbeck’s Doggie Treats’.

As much as I’m flattered to be Granville’s confidante, for his own well-being I feel he needs to expand the audience of people he confides in. I appreciate it’s not easy if you have trust issues, but I feel our conversations on mental health have given me a better understanding of the illness. Subsequently, I’m more empathetic towards sufferers than I was previously.

There has been progression, he now embraces the surreal areas of his mind which he often ventures in pursuit of a laugh. A side of him he’d previously loathed, longing instead for his erratic mind to behave like ‘normal’ people.

Granville understands his off the wall humour isn’t everyone’s ‘cup of tea’, however that no longer troubles him.

As an outsider looking in, I suppose the getting rid of that self-loathing is a huge starting point to take his next steps. Some of the most prominent triggers for his depression (enduring family health issues) will not go away, however he continues to strive to resolve the things that can.

A man of floors, no that’s not a spelling mistake he has floors throughout his house, Granville may have been initially quiet yesterday. However, I do know from previous conversations of how much he does advocate the power of talking about his mental health.

As the late actor Bob Hoskins advocated in the BT commercials over twenty years ago, “It’s good to talk”. Although from the actor who played a gangland boss, it seemed more like a threat to me at the time. A warning to make lots of unnecessary telephone calls or he’d send the boys round!

Incidentally, even though I’ve added a few light hearted elements to this narrative, under no circumstances do I think mental health issues are funny. I feel humour is an important accompaniment to recovery from depression as chatting, so added them to lighten a hitherto dark subject.

Right, I need to conclude this monologue as I’ve a train to catch…… I haven’t really, I just thought it read better than telling you I’m going to sit on my backside binge watching Suits on Netflix.

Incidentally, does anyone want to buy two tickets for this years Llanelli Flower Show?