I’ve just spent a cathartic couple of hours at Roundhay Park on the northern edge of our fair metropolis. As with the medicinal compound created by Lily the Pink ( the eponymous creation of beatnik poets The Scaffold), the jaunt was efficacious in everyway.

Meandering amongst the mature trees, well-kempt grassy knolls and sporadic clusters of bedding plants, my angst at finding we’d run out of marmite at breakfast swiftly evaporated.

Accompanying me during this serene wander was my wife Karen; the mother of my children, and disorganised food shopper who shamefully forgot to buy a jar of marmite last week. Throughout the walk, she wore the smile of a woman whose favoured toast topping of marmalade had been in plentiful supply at breakfast.

As is the norm, due to her illness we had to stop at regular instances so she could rest on a park bench; a necessity allowing Karen to replenish her energy levels. 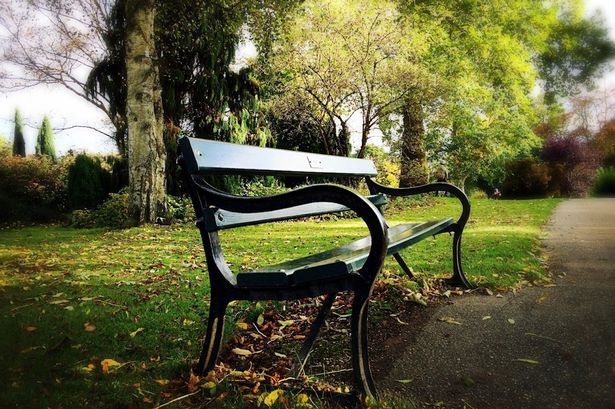 When I stated in the first paragraph that this jaunt had been cathartic, that isn’t strictly true. There was an instance when the atmosphere between Karen and I became a tad fraught during one of her park bench breaks.

Perched on a lakeside wooden seat, my wife exhaled contentedly and opined chirpily “Nature’s therapeutic qualities are amazing, aren’t they?”

Being in a mischievous mood I responded “As majestic as a slice of toast with an accompaniment of marmite.”, unable to resist raising the subject of Karen’s shopping oversight.

“Will you  bloody shut up about toast toppings, you’re starting to really do my head in now!…… I told you forgetting the marmite was an unintentional oversight!” Karen snapped back at me.

“Ok, I’ll not mention vegemite again…… Do you mind, though, if I raise the subject of pizza toppings?” I queried, looking to verbal entrap my wife.

“What are you on about?” my spouse proffered, unsurprisingly bemused.

“Well not only did you forget the marmite in last week’s shop, the pizza you got me had the wrong topping.” I attempted to clarify.

“I got you a Quattro Formaggio pizza, like you’d asked!” Karen countered, no doubt wondering what the hell I was referring to.

“And?!” Karen enquired, starting to look and sound agitated.

“The pizza you bought only had a topping of three cheeses!…… Your lack of thoroughness ruined my eating experience!” I inanely teased my missus.

“You said it was lovely after you’d eaten it!” Karen disputed; probably regretting she’d elongated this arbitrary conversation.

“I was being polite.” I replied, before adding “I didn’t want to hurt your feelings.”

“You wouldn’t have hurt my feelings….. I’d have just told you to go buy your own pizzas in future; then got back to watching the crap movie you’d chosen for us…… The one I specifically told you I didn’t want to watch!” she mooted, the crescendo of her voice growing ever louder.

“It had Tom Hanks in….. You love Tom Hanks movies…… I thought your protestations were tongue in cheek!” I argued.

“He was!……. It was a cameo appearance, he was the axe shop owner.” I continued to reason ineptly, while becoming increasingly uncertain about the validity of my arguments.

“That wasn’t Tom Hanks!….. For a start, the axe shop owner was an African American. Not to mention he’d have been too young for that role when that old movie was produced!” my spouse agitatedly assured.

“Ok, I admit he might not have in the movie…… But the film wasn’t anywhere near as bad as you claimed!” I ill-advisedly opined.

“You’re joking aren’t you!…… How many axe murderer’s have a chuffing catchphrase, dislike of the sight of blood and have cloven hooves instead of hands?!” my wife sneered.

It was at this point I realised her arguments were starting to win over the jury. However, instead of letting this argument (which I was losing badly) die a death, I foolishly retorted:-

“I don’t know any axe murderers, so I can’t answer that!” I responded defensively, before conceding “Unless, of course, you count Hector at number 153, who admittedly didn’t have cloven hooved hands, hate the sight of blood or a use a catchphrase.”

“I rest my case your honour!” my missus smugly claimed, clearly taking immense satisfaction from her victory, which I’d handed her on a plate.

Despite no marmite for breakfast and being vanquished in an argument I’d started as an act of mischief, I refused to be downbeat. Karen had been correct earlier, it is difficult to have low spirits in the presence of nature’s kaleidoscopic canvas.

Upon re-commencing our amble, Karen and I headed towards the charming Monet Garden adjacent to the Roundhay Fox pub. Enchanted by the sights and sounds of petunias and bird’s-tunias, we administered a precautionary layer of sun cream on our visages; protection against the mornings solar rays in north Leeds.

After walking through the Monet Garden we rested on a park bench by the Alhambra Garden, allowing Karen to regain her full breathing capacity. On parking our posteriors on the wooden seat, I turned to my spouse, informing her “Do you realise you bought sun factor 30 cream during your shop last week?….. I specifically asked for sun factor 15!……. Bloody hell, can you not do anything right?!”…………….. Light the blue touch and retire!!