Yesterday I wrote of all things philosophical. Well not all things, I mainly conveyed the fictional philosophy imparted by an equally fictional Frenchman named Aidan Le Torche.

Today I want to touch upon the lower end of the guidance/advice market by discussing old wives tales. Depending on your inclination, these sound bites of yore are advocated as gospel truth to be followed to the letter, whereas others dismiss them as absurd.

They are generational pearls of wisdom bequeathed by some mothers to their offspring. Although the motives of the maternal figure are ordinarily well meaning, the tangible benefit achieved by their indoctrination depends on the intellectual wherewithal of all parties involved.

Old wives tales cascade how long swallowed chewing gum takes to digest. Without them we wouldn’t be in possession of the fact we should touch wood to avoid tempting fate. Or, indeed, be aware that if a north wind shall blow you’ll see a partridge (or something like that). 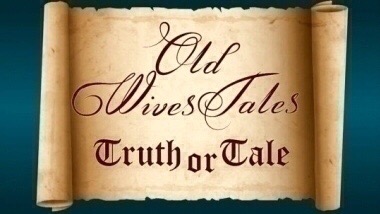 Despite my cheap tongue in cheek jibe at these tales, I’m not advocating that these snippets of knowledge are all incorrect, or they never enhance peoples lives in any way. However, I’m inclined not to pay them much mind, as I opine most of them are as factually likely as Lee Harvey Oswald being the lone assassin of John F Kennedy.

I’m not saying all people who subscribe to these soundbites from the cauldron are idiots. For example, you in Buxton reading this certainly aren’t……. That’s despite your idiotic belief you shouldn’t ride a horse in a month with the letter ‘F’ in it!

That being said, your adherence to these superstitions hasn’t stopped you wearing that dreadful green top with those blue jeans….. Remember your granny always taught you that “Blue and green should never be seen!”……. Although, I guess that’s more a fashion statement than a superstition.

A proportion of ‘old wives tales’ are from a time so long ago they no longer bear relevance. For example last week a friend, who believes in the validity of these tales, told me “If you see one woolly mammoth it signifies it will snow, if you see two run like hell!”

It sounds like it would have been pertinent advice back then, however I’m not sure how relevant it is these days.

An online website describes old wives tales as “An epithet used to indicate that a supposed truth is actually a superstition, or something untrue to be ridiculed.”

I’d subscribe to that descriptive, or at least I would if I knew what epithet meant!

Letting a wound “dry out” is the proper treatment.

Swimming with full stomach causes cramps and that one should wait an hour after eating before swimming.

Don’t swallow gum or it will stay in your stomach for seven years.

Eating crusts (of a sandwich) makes your hair go curly/you grow hair on your chest.

The appearance of white spots on the fingernails is due to lying/not eating enough green vegetables/calcium.

The widespread passing of this folklore as genuine highlights the indoctrinating power of old wives tales. They are generally harmless sound bites, however, it amazes me the number of individuals who advocate it as scientifically valid information.

It intrigues me how a proportion of these widely held traditions come to pass. For example, how did “Don’t swallow gum or it will stay in your stomach for seven years.” gain credence?…… I suspect it wasn’t a recommendation from local councils, who spend thousands having to remove gum from pathways.

For balance, I wanted to add that apparently not all ‘old wives tales’ are nonsense. The following have been apparently scientifically proven as good advice:-

Don’t play hide and seek on the M1 motorway.

Don’t call ex-boxer Mike Tyson a soft shite if you’re in the same continent as him, or not heavily armed!

Don’t tell your wife she is wrong about anything.

‘Debbie Does Dallas’ isn’t a travel information film by the Texas Tourist Board.

If you see one woolly mammoth it signifies snow, if you see two run like hell!

Anyway, I have to draw a line under this blog now as it’s 1.30am and I need to kip after writing four blogs in the last 24 hours…….. Goodnight.