This afternoon I had my first experience of transporting someone around a shopping centre in a wheelchair. This the consequence of my dad deciding he felt well enough to accompany my mum and I on a weekly comestible shop at Sainsburys, in the White Rose Shopping Centre.

A supermarket shop my parents is generally a comical affair, where my dad’s OCD goes into overdrive and my mum struggles with an unusually restrained outdoor demeanour, which stops her reacting to his quirks.

Today, while my mum wheeled the supermarket trolley in front of me, I followed with pater in her wake. Although a novice at steering a wheelchair, thankfully they are a damn  sight easier to steer than a supermarket trolley….. In a trolley’s defence, though, at least it doesn’t stop me on every aisle to exclaim “Will you slow down, Gary…… I want to check the ‘use by’ dates!”

It was a surreal experience, one in which I felt I’d been transported through a portal into a Lou & Andy sketch, from the cult comedy Little Britain. For the uninitiated, Lou Todd is the patient, long-suffering carer for Andy Pipkin, a selfish, ungrateful boor who he wheels around town out of the goodness of his heart.

Played with the comedic skill you’d expect from David Walliams and Matt Lucas, Pipkin takes advantage of Lou’s good nature with his childlike demands of “Want that one” and “Don’t like it”. Also unbeknown to Lou, Andy isn’t actually wheelchair bound, often getting out of his chair to undertake a physical activity while his carer is distracted. 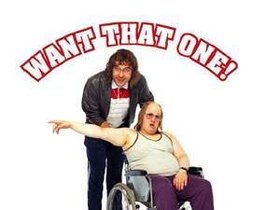 I want to clarify at this point, my old man’s behaviour is ordinarily a million miles away from that of Andy Pipkin. He is a loving, caring, selfless, well-mannered man who ordinarily sees the good in people and exhibits gratitude by the spade load.

That being said, the frustration of his circumstances since surgery in June have unearthed a side of our family head he’s not previously exposed. On occasion the octogenarian can now be a tad more abrupt than his former self, which I suppose is understandable after such a trying few months.

My comparison to him and Andy Pipkin is born from the fact that, during this shop my dad ventured into the realms of abrupt responses like “Don’t want that”, “I’m not having ham, I don’t like it” (he does) and “Get me one with a longer ‘use by’ date”.

As I alluded to above, it’s not a side of Mr Strachan senior we’ve ever seen until very recently, but it is a matter of fact his manners do sporadically escape him these days. Blessedly, unlike Andy Pipkin, he stopped short of feigning the need for a wheelchair; at least I’m not aware of him pole vaulting over the cereal aisle as soon as my mum and I turned our backs to check out a ‘3 for 2’ bread offer.

It has to be said, my mater showed admirable restraint by not reacting to her spouse’s stress testing of her tolerance levels. The only time she reacted with any hostility being when he asked me if my car insurance covered me driving his car. Before I had a chance to respond in the affirmative, my mum snapped back “I bloody hope so, he’s been driving it for the past year!”

My dad didn’t react, he just pointed to a box of cereals and advised “Want that one.”