On Tuesday evening, I took a journey on foot that I’ve taken many of times over the past 47 years. A sojourn that commences with parking in the vicinity of the Dragon Pub on Whitehall Road, Leeds, with a ultimate destination of Elland Road football stadium.

It’s a walk that starts with crossing Whitehall Road, followed by an amble down a bramble bush and stinging nettle laden ginnel; strolling it’s 200 yards or so of well worn path until it unceremoniously ends as you reach Gelderd Road.

At this point, an adrenaline rush would take over from my thus far stress-free meander, as I endeavoured to navigate my way across Gelderd Road between the stop/start matchday traffic. This foolhardy strategy, entailing the passing in front of cars when they slow down enough to minimise risk of injury, isn’t how the Green Cross Man (Dave Prowse) taught my generation to safely join the chicken on the other side.

That being said, if I’d have taken heed of the actor who played Darth Vader’s teachings I possibly wouldn’t have got to the ground until the 53rd minute (other match  minutes are available). As a consequence, I might have missed an Allan Clarke goal or Duncan McKenzie jumping over a mini at half time.

Even worse, I may have missed the diminutive former Welsh midfielder Brian Flynn become the second littlest guy dressed in all white to exclaim “The plane boss!….. The plane!” while pointing skyward at a 1970’s Boeing-737 headed towards the airport at Yeadon.

After getting to the other side of Gelderd Road and acknowledging the chicken, the final few hundred yards to the Elland Road football ground involve dodging more cars (both mobile and stationary) on Lowfields Road.

The first time I strolled this route was in September 1970, to witness a 1-0 victory over Southampton courtesy of a Johnny Giles spot kick. Since that inaugural walk in the inaugural year of the 70’s, inevitably the stadium view en-route has changed markedly over the subsequent years.

When my dad first walked me towards the ground as a seven year old boy, the legacy Lowfields Road stand was the most prominent view as I excitedly walked toward what was to become my rite of passage. A metaphorical ceremony where I was initiated into a tribe which, like the mafia, once I’d joined there’s no going back. Not that I ever wanted to, I hasten to add. 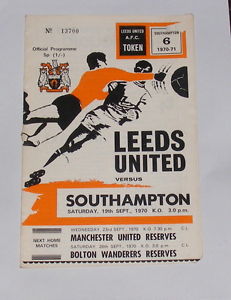 We’d moved to Gateshead around that time with my dad’s job, however my old man chose to take me to the altar that praised Leeds United, my place of birth and roots. Thankfully, he intervened when he did which negated me treading the barren path as a disciple of one of the north east teams.

These 47 years have been a rollercoaster ride; one which due to it’s height restrictions I’m surprised Brian Flynn was allowed to ride. But no matter what, no one can take away from me I got to see the great Revie team several times before it grew old together in the mid to late 1970’s.

One of the greatest teams to have graced English club football; the team with eleven international players, a meticulous manager and vociferous following. A side with trainer Les Cocker who, in spite of being a similar stature to Brian Flynn, wasn’t deterred from carrying the injured 6’3″ frame of Gordon McQueen from the pitch with a fireman’s lift if need be.

To clarify, I’m by no stretch of the imagination a diehard fan. I don’t follow the team away like many thousands of Leeds supporters do, and although witnessing hundreds of home games over nearly five decades and possessing a wealth of knowledge about the club, these days I only go to the odd game (despite living back in Leeds for the last 21 years).

The purpose of my narrative wasn’t to say I’m a great fan, it was to relay that as I walked down the exact same route to the ground on Tuesday evening, accompanied by my 27 years old son (who I initiated into the same tribe in December 1996), I thought of that inaugural saunter from the Dragon pub to Elland Road with my old man.

I’m not sure what manifested this nostalgic epiphany, but I’d wager it was seeing my dad in very poor health shortly before commencing my journey to the cathedral in LS11, a place whose pews I shamefully hardly darken these days.

Amongst the many things I owe my old man, is that September afternoon wander. A simple act undertaken by thousands of fathers every week of the football season, but that venture ensured my sporting allegiances (along with childhood visits to Headingley and Scarborough cricket grounds) stayed true to my roots.

It was an emotional walk to Elland Road on Tuesday evening, mulling over that life affirming event in September 1970. My daydreaming though nearly ended with me being run over at the bottom of Lowfields Road when I nearly walked into a stationary mini. As I don’t possess Duncan McKenzie’s leap, I walked around the vehicle as opposed to jumping it.

Despite the pleasure gleaned from Leeds winning on Tuesday, nothing will ever recreate my feeling of excitement as a 7 year old boy walking to witness Don Revie’s warriors in all-white…….. An experience I hope will be bestowed upon future generations.