During yesterdays nostalgic musings which broached the subject of cricket scoreboards, recollections of working in a local club’s scorebox in my early teens manifested themselves in my random mind.

Joining Gateshead Fell cricket club as a junior player in 1976 took my life on a much needed new path. My recently acquired joys of puberty, along with the end of a phase of my development that I truly loved, hit me badly.

As my voice dropped from soprano to an erratic lower range muddle, I found the loss of this pre-pubescent childhood lifestyle diminished my existential fulfilment. I became disenchanted that body hair, spots, greasy skin and unwanted stirrings had replaced Subbuteo, collecting Panini football stickers and not having unwanted stirrings.

This disillusionment exacerbated by it coinciding with the start of the demise of the all conquering Leeds United team, moulded by Don Revie. Something I never truly got over, even in adulthood. With all these unwelcome distractions, I was in desperate need of a fillip to somehow counter what, I believed then, was irreconcilable turmoil and angst. Joining ‘The Fell’ cricket club proved to be that much needed catalyst.

In the early years after I joined, before playing for the senior teams on a Saturday, I used to assist operating the scoreboard on matchdays. This initially started with working the scoreboard with fellow junior team members, eventually moving onto the non-executive role of Guardian of the Scorebook. 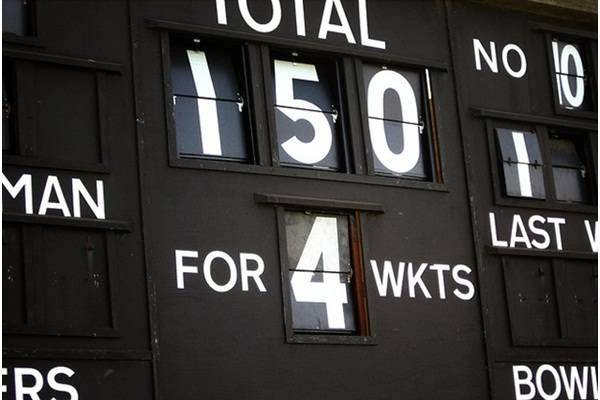 I started my scorebox apprenticeship with being in charge of the lower numbers on the board (overs and wickets), while one of the older juniors took care of the more fluidly changing numbers (team and batsmen’s totals). Sitting on a desk to our right was the scorers for the home and away sides.

Being adept at the lower numbers, along with the older junior developed malaria (or something like that), it wasn’t long before I was interviewed for the role of Head of Higher Numbers. As I recall it wasn’t a long interview, I was asked by the club captain “Can you do the high scoreboard numbers today, Gary?…. Jonta has caught another tropical disease!”…… He wasn’t really called Jonta, but I can’t for the life of me recollect his actual name.

After responding in the affirmative, buoyed by my extra responsibility I walked over from the club pavilion towards the scoreboard with a spring in my step. My companions on this short stroll were the scorers and a junior player who’d been drafted in to change the overs and wickets (my normal job).

As I got near the imposing scoreboard with its white numbers on black façade, I paused for a moment of quiet reflection 20 metres from this historic monochrome structure. I wanted to show respect to the ‘monument’ that had for decades been the score guide to Eastwood Gardens crowds. North eastern revellers getting increasingly inebriated as the summer shadows lengthened.

A witness to hundreds of thousands of Durham Senior League runs and wickets in it’s time, if only it could talk I mused to myself at the time. That being said, if it had have possessed the power of speech it’s first words to me would probably have been “Get your arse in gear Strachan, the umpires are on their way out!”

It was a brief show of veneration by yours truly, prior to a swift walk to the scorebox entrance….. As I mulled over my emotive thoughts, I couldn’t help but wonder to myself “How the hell do you catch a tropical disease in Gateshead?”

The scorebox was accessible via a door to the rear of the predominantly brick construction. Once inside, to reach the scorer and scoreboard operative’s perches it was necessary to climb a set of wooden stairs. The scorers were seated at a desk by a window. Meanwhile, scoreboard operatives stood on a raised platform, allowing them to operate the strings that facilitated the movement of the board numbers.

I always like to think this summer Saturday role was skilled labour, after all, my job remit requiring concentration and responsible behaviour. As a boy, I was proud to have the task, after all they wouldn’t let any old idiot do it……… Actually, coming to think of it, my brother Ian used to help keep the scoreboard up to date, so perhaps the selection process for the role wasn’t as stringent as I recollect……. Strike that!

Underneath the raised platform, there was ordinarily numerous empty crisp packets, splintered cricket stumps, bits of broken scoreboard numbers and unread pamphlets on mitigating against contracting malaria in the north east of England.

Our recompense for operating the scoreboard was 50p each, plus the honour of clearing out all the empty crisp packets and malaria prevention leaflets after the match. If memory serves me correct the scorer got the princely some of £1, but the wealth never changed him…… Oh, we all got a free tea between innings as well.

When penning a blog I endeavour to write between 500-700 words a day. As I’m well over that number, I’ll conclude this monologue with a plan to scribe further tales from the scorebox in the coming days.

My further yarns will include taking my rite of passage to become Guardian of the Scorebook. Also incorporated will be tales of eccentric scorers and an opposition board operative who bragged his party piece was reciting the whole Wisden Almanac (book of professional cricket statistics) from back to front.

On hearing this claim at the time, I was mightily impressed. However, after pressing further found out he could only do it if reading from the Almanac itself, which I concluded was a rubbish trick achievable by anyone who could read……. Needless to say, he didn’t get invited to many parties to show off his ‘magic memory’!