According to the ‘On This Day’ function on Facebook, two years ago today I’d just returned home from a stag weekend in the beautiful city of Edinburgh.

As becoming of a group of men hurtling, or already in, middle age it was a relatively tame affair. There was plenty beer drunk over the three days, but the nearest we got to drugs were statins and high blood pressure inhibitors.

As expected the weekend was meticulously arranged by the Best Man (I’ll call Mr D), who organised the ten of us to within an inch of our lives. He marshalled our weekend with the detail Jerome Robbins took choreographing the movie West Side Story, only without the leggings and the Academy Awards……. At least, I don’t believe the Best Man has an Oscar!

Mr D even managed to find a lap dancing club where you paid for a dance with a ‘contactless’ debit card. The place you scanned your card was innovative, as was how the receipt was printed!!

To be honest, we didn’t go to a lap dancing club. We couldn’t as the stag (I’ll call Mr T) didn’t bring his debit card with him…… Incidentally, when I say Mr T, I gave him that name as T is the first letter of his Christian name. I want to make it perfectly clear that we weren’t at the bachelor party of one of the A Team!

On the train journey up I noticed the Tree of McCulloch in a field close to the England/Scotland border.

Legend (and my old History teacher Mr Waugh) has it this is where King Alfred burnt the cakes, whilst signing the Magna Carta in 1966 after the England World Cup win…. Alfred blamed the Jamie Oliver recipe, but the consensus of opinion was he was just a slack so and so who was distracted by Geoff Hurst’s third goal.

As you can see, history wasn’t one of my (or bizarrely my History teachers) strong subjects.

On arrival in the city with imposing castle and a building on Princes Street that looks like Thunderbird 3, we learned that Mr D’s regimental planning extended to him factoring in we could have no longer than five minutes in the toilet.

Much to his chagrin, I inadvertently breached this dictum on the Saturday night due to queuing for a cubicle . …. My court martial was the following Thursday. However, after enlisted OJ Simpson’s lawyer I beat the rap…….It’s amazing what you can get away with if you can’t get a glove on.

Amongst the other activities Mr D planned for us was kayaking/canoeing, taking in a Scottish football match, accompanied by unhealthy foods and drinking. The only event that wasn’t on the itinerary was my brother getting so drunk on the Friday he started speaking in tongues.

I had previously been sceptical about the existence of this religious language, however, following our Ian’s efforts on that first night I’m now a believer……. I must say, though, his antics didn’t sell Pentacostal Christianity to me; this despite constantly shaking my hand and telling me how much he loved me.

Living around 100 miles from brother, it’s rare we get together these day so it was great to see him. Over this weekend, my younger sibling once again ratified the famous proverb ‘You can lead a horse to water. But you’ve no chance of doing the same with Ian Strachan if there is wine or beer in the house’.

Below is an artists impression of my brother late on the Friday (and very probably Saturday and Sunday). 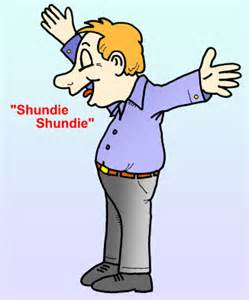 Despite my ramblings about my occasionally over indulgent brother, he’s a top guy with a heart of gold, who I love (and not just after 10 pints either).

His notorious clumsiness (he even broke an ornament and knocked over a cup of tea during his home birth in 1965) disrupted our planned visit to the famed Edinburgh Bone China & Other Fragile Stuff Store. However, we weren’t phased as our trustworthy Best Man had plenty of other activities planned.

The canoeing and kayaking on the Union Canal turned out to be a fulfilling pastime. One of the kayakers (again no names) spent the first half hour inadvertently spinning round due to stroke issues……. By that, I don’t mean he had a stroke rendering him paralysed on one side, just his erratic paddling affected his ability to proceed in a forward direction.

At one point this kayak spinning caused a whirlpool of such magnitude, there were fears of a maritime incident of a scale not seen in Edinburgh waters since the Leith iceberg in 1995.

During that incident, Rob Stuart’s swan pedalo was struck by ice and capsized. Rob survived but the pedalo and the couple stood at the front singing a Celine Dion song sadly perished.

Every year on the anniversary Rob stands for a minute at the dock side performing a melancholic rendition of My Heart Will Go On by duck whistle, in tribute to those who passed that fateful day.

In the end we all survived the weekend unscathed, although a bunch of middle aged men’s livers ached for a few days on their return home.

What life lessons did I learn during this bachelor weekend?……. Well not a lot really, other than if I ever go on a stag do in Edinburgh again to ensure the groom takes his chuffing ‘contactless’ debit card!