Consequently, the consumers altruism meant my voluntary stint concluded with a weighty collection bucket, not to mention arms like Stretch Armstrong. Dressed in my green MacMillan t-shirt I now resemble a sea sick orang-utan.

I’ve written many times about my cancer charity collections. Self-congratulatory narratives of shameful attention-seeking and self-indulgence. Smug pronouncements that possibly paint me as a wisenheimer……. I say possibly as I’m unsure what a wisenheimer is!

Seriously, though, those previous monologues have been written to highlight the compassion, good-heartedness and humanity of many individuals on our sceptre isles. People whose actions restore faith in humankind and dispel the myths advocated by cynics who tar everyone as self-indulgent, cold and uncaring.

Like most of this weeks soliloquys, I’ve not had the luxury of a distraction-free writing session. After around 150 words, I had cause to venture with my wife Karen for a visit to see my dad in one of this metropolis’ many fine medical establishments.

My wife and his cancer fights are among the reasons I feel so passionately about voluntary work for these types of charities.

Thankfully, the improvement of the old man’s lucidity and demeanour witnessed yesterday, after what had been a hebdomas horribilis, was still apparent. However, there was no evident further improvement in the last 24 hours. If there has it’s been that of a slug in a salt minefield.

I restarted writing this blog after 5 pm on Friday afternoon; mind in a mush and sausage in mash……. Incidentally, sausage in mash isn’t a euphemism it’s the tea I ate as I re-commenced this prose.

On the brood’s hospital visiting rota, after 8 days on the trot of attending Leeds General Infirmary (LGI), I was supposed to have a day free from treading the wards. This act is akin to treading the boards, just with a less dramatic entrance and no one wishing you to break a leg before hand.

You see plenty with broken legs whilst treading the wards, however few (if any) are the consequence of treading the boards. A further difference between the two is treading wards is never undertaken adorning a Shakespearean costume……… Unless you’re visiting Orthodontic patients, where it’s apparently compulsory.

My dad was in decent spirits when he saw Karen and me. I’m unsure if that was because my mum (who’d been there for three hours) was driving him mad with her trademark mischief, or that I dishonestly told him he needed to perk up as it was World Decent Spirits Day.

The only occasion during my spouse and my visit that the old man seemed frustrated and confused was when he asked me, for the second time this week, if I’d paid off the builder. To be honest, I’ve no idea what that means. Could it be Mally is he being extorted by Ben Bailey Homes? Or has the guy who recently built his patio found the bodies?

I tried to re-assure my old man by misleadingly telling him “I can’t get hold of the builder as he’s down the pub celebrating World Decent Spirits Day. They do a fantastic single malt apparently… I’ll ring him on Monday though dad.” 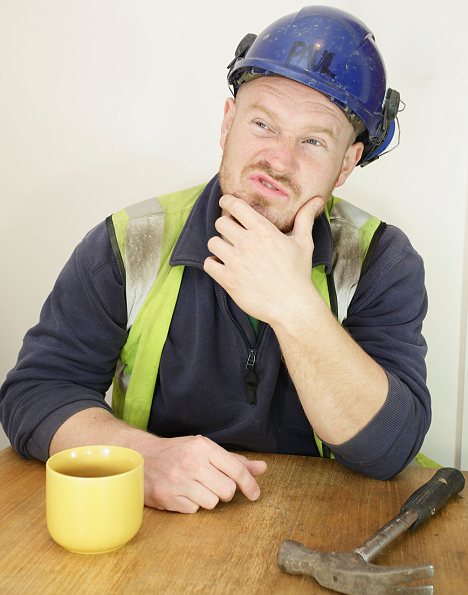