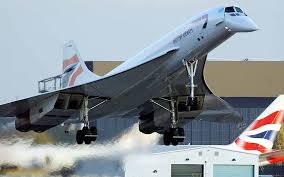 Fourteen years ago today, the supersonic aircraft Concorde said an emotional farewell, when it flew its final commercial flight. The iconic aeroplane’s journey from New York to London, which landed at Heathrow airport at 4.05 pm, was laden with celebrities and the bloke who looked after the dartboard on quiz show Bullseye.

The immediately identifiable aircraft was retired from service as in an increasingly competitive industry it was no longer financially viable. Additionally, there were concerns about the plane, which was displaying symptoms of depression brought on by being teased about it’s inordinately large proboscis.

The decision to take it out of the limelight led to a mixture of emotions for British Airways bosses. There was sadness at the end of commercial flights for the cone nosed aircraft; amalgamated with the mood to celebrate its major contribution to aviation history. 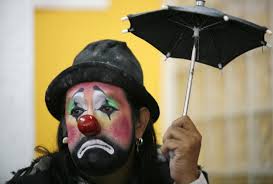 Celebrities on this historic transatlantic flight had similar mixed feelings. Actress Joan Collins called it “tragic”, although the root cause of that may have been she laddered her tights. The person sat next to model Christie Hinkley was said to have throughly enjoyed his flight.

The first commercial flights took place on 21 January 1976 when British Airways (BA) flew from London Heathrow to Bahrain and Air France from Paris to Rio.

Transatlantic flights began later that year following an vision appearing to an airline executive, informing him god wanted him to fly Concorde to America. However, when the apparition asking if he could lend him £20 until pay day, the executive became sceptical whether they were indeed the wishes of god……………Despite this, the idea of flying to the USA seemed a good one, so he adopted it

Ex-Concorde steward Mydon Wexburgh recently wrote a book of memoirs from his time in service on the aircraft. His anecdotes include rejecting a beautiful model who wanted to initiate him into the ‘mile high club’, a passenger who bought a $9,000 seat for his tin of creosote and an anxious chain smoking vicar who, at 60,000 feet, asked if there was a smoking shelter outside of the plane.

Wexburgh was particularly disappointed he couldn’t succumb to the actress’ request. However, as he was unable to sustain an erection over 40,000 feet he had no option but to turn down her kind offer.

What happened to the Concorde’s after their removal from commercial flights? Well, one flew to the Grantley Adams Airport in Barbados; another went to a museum in Seattle, while a third is at a floating exhibition in New York.

Others can be seen at Heathrow Airport, Manchester Airport, Bristol’s Filton Airport and on display at the Museum of Flight near Edinburgh.

The last ever Concorde flight just after landing at Heathrow. I hope they’ve landed, anyway, as the pilots have the windows open and are waving flags! 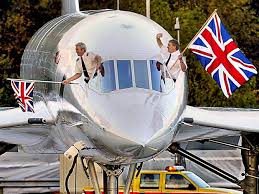 The French Concorde’s are now being shown in museums in France, the US and Germany…… Oh and one Concorde moved to Santa Monica, had corrective surgery on its nose, married a woman called Trevor and lived happily ever after!