Well it’s reached the last day of a month where several legends from the entertainment business have been taken from us.

Unfortunately January 2016, as part of his pact with the grim reaper, didn’t want to go with a whimper. Consequently, this morning we were hit with the sad news of the passing of broadcaster/presenter Sir Terry Wogan. Meaning on January’s watch we have lost David Bowie, Alan Rickman, Glenn Fry and now the genial Irish radio presenter Sir Terence.

I’ve written often of how I think of my life events as part of a tapestry. Depicted on this metaphorical tapestry is the rollercoaster of my time on this mortal coil. Like everyone, there are some good times, some bad and some indifferent. You could say it’s a bit like my wife Karen’s cooking, without the burnt bits.

Unlike the infinitely more famous Bayeux Tapestry, mine depicts half a century of my memories, not the events surrounding the Norman Conquests or the Battle of Hastings. Additionally, unlike the Bayeux Tapestry, on mine there is no depiction of King Harold Godwinson losing his life when hit in the eye with an arrow. 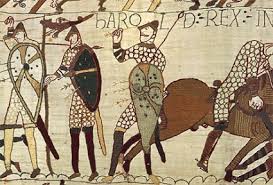 Sir Terry Wogan features in several places on my tapestry. His was the calming voice that accompanied the Strachan morning school run in the 1970’s. His genial soft Irish brogue somehow made my corn flakes, not to mention a rollocking for not doing my homework, a tad more palatable.

Even on the foulest of winter mornings in the north east of England, the atmosphere was lightened by his mischievous humour on the school bound journey to school in my dad’s Ford Cortina.

Sir Terry’s affable nature brought brief respite from my regular pubescent low mood at this time. An angst predominantly brought on by a mixture of hormones and Leeds United’s gradual decline in that decade.

The Irishman’s was the voice we heard on a cold January morning in the mid 70’s, when my dad hit black ice on a steep hill top segment of Dartmouth Avenue, causing the car to skid downhill out of control. Thankfully there wasn’t a car or individual in our path and we came to an abrupt stop after colliding with the opposite kerb.

As my brother and I sat there shaken and dad went to replace his displaced hub cap, a jovial lilt on the car radio told the nation “And now here’s Pilot with their new song January. After this it’ll be ‘Pause for thought’ with Canon Michael Darcy.”

This voice somehow had a calming almost spiritual affect on my sibling and I. It was as though Terry was subliminally telling us “It’s ok lads, it’s just a little bump. The main thing is no one’s hurt. Oh and don’t worry about not doing your Religious Education homework; send it in for Canon Michael Darcy to complete.” 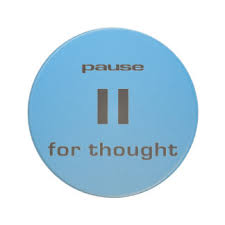 Of course Sir Terry wasn’t just famous for his eminently entertaining radio show. He graced TV in various guises, including commentating on the Eurovision Song Contest along with presenting game shows, including Blankety Blank.

I’m not a fan of the Eurovision Song Contest and haven’t watched it since I left my childhood home in the mid 1980’s. I respect that TV audiences of millions around Europe love it, however apart from ABBA’s Waterloo and a few others (which I’m struggling to think of) I opine the songs are truly awful.

When I did watch it in the 1970’s/80’s, even though I wasn’t enamoured with the music, it was worth a watch for Terry Wogan’s whimsical BBC commentary. Witty, barbed and tongue in cheek, his quips entertained me more than the musical performances.

His jibes at competitors and show hosts made it a bearable viewing spectacle for yours truly.

Without Terry Wogan’s commentary, ABBA’s Waterloo and the Riverdance interval act in 1984, the Eurovision Song Contest would be as absent from my life tapestry as King Harold.

As host of Blankety Blank, with its double entrendre laden questions, Terry Wogan got the perfect opportunity to air his mischievousness. Its format gave him carte blanche to take a friendly swipe at contestants, celebrity guests and the woeful BBC game show prizes.

I’m not sure if the game show was devised with Sir Terry in mind as the host, but it was a great fit for him and proved one of the more entertaining shows in that genre. His stock at his peak was so high he stood shoulder to shoulder with the top earning presenters.

As such, he deservedly didn’t return home with just a silver plated Blankety Blank cheque book and pen. 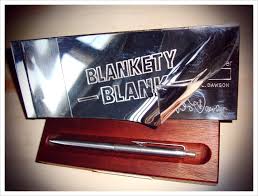 As with my small tribute to David Bowie a few weeks back, it’s impossible to include Sir Terry’s achievements in a blog of between 700-1000 words.

I didn’t know the guy and as such I can only write what I’ve seen of him on TV or heard on radio. From what I could see or hear the one thing that stood out from a long list of attributes is he seemed a genuinely nice bloke. The type who’d behave in the same mischievous manner whether broadcasting to millions, or chatting to Old Ted in the snug of the Eton Working Men’s Club.

To close this blog, I’ll leave you with the genial Limerick born broadcasters tongue in cheek comment when told his radio show audience had reached 8 million:- “Hang on: there’s 60 million people in the country – what are the other 52 million listening to?”

Thanks for the happy memories! I will pause for thought after I’ve played January by Pilot later!