Karen returns from a few days break to see her parents today. I had the option of visiting her mum and dad in the People’s Republic of Birtley (PRB) or treating the fences and trellis work in my back garden…… It didn’t take me long before I headed down to Homebase for the wood treatment.

I shouldn’t be so nasty really as they are people of great humanity. For example, Avril was so abhorred with her uncle for invading Poland in 1939, she shaved her moustache off in protest.

George is forever doing stuff for Charity. I just hope that Avril never bumps into Charity at her divinity classes.

Seriously, though, I will forever be in their debt for the help and support they have provided since Karen’s diagnosis. After all, I really don’t know how we’d have coped without their one visit (Oct 2011) in the five years since my courageous spouse was diagnosed with incurable cancer. I can’t thank them enough for being such rocks during these difficult few years.

Is there such a saying ‘you bet your boots’ or have I just made that up?….. If there isn’t there should be!

People who are aware of this situation have told me “They probably are just in denial, Gary.”

Well all I can say is that it’s a bloody good job I didn’t just bury my head in the sand. Otherwise she’d have had no one in the past 5 years (apart from my family and a few friends)! I’ve made idiotic errors under strain at times, but I have also been there every step of the way.

Throughout the many hundreds of hours of Karen’s treatment, consultations, scans and waiting room jaunts I’ve accompanied my strong and determined spouse.

There isn’t anything good about living with cancer at all. However what it can give you is time to say goodbye. Her parents have chosen not to utilise that time with her, unless she goes up there.

Anyway, enough of airing my dirty washing!……. That reminds me, I need to air off some washing before I pick Karen up! I best not dwell on here for too much long.

Before I close I wanted to share an old photo (recently unearthed) of a family BBQ over 10 years ago. It is a picture of me, halfway through my meal, performing a very unconvincing Popeye impression.

I think I should have put more spinach on my plate at the time, as shortly after this was taken Karen had to cut up my steak for me! (That’s a joke, by the way!…… It was my mum!). 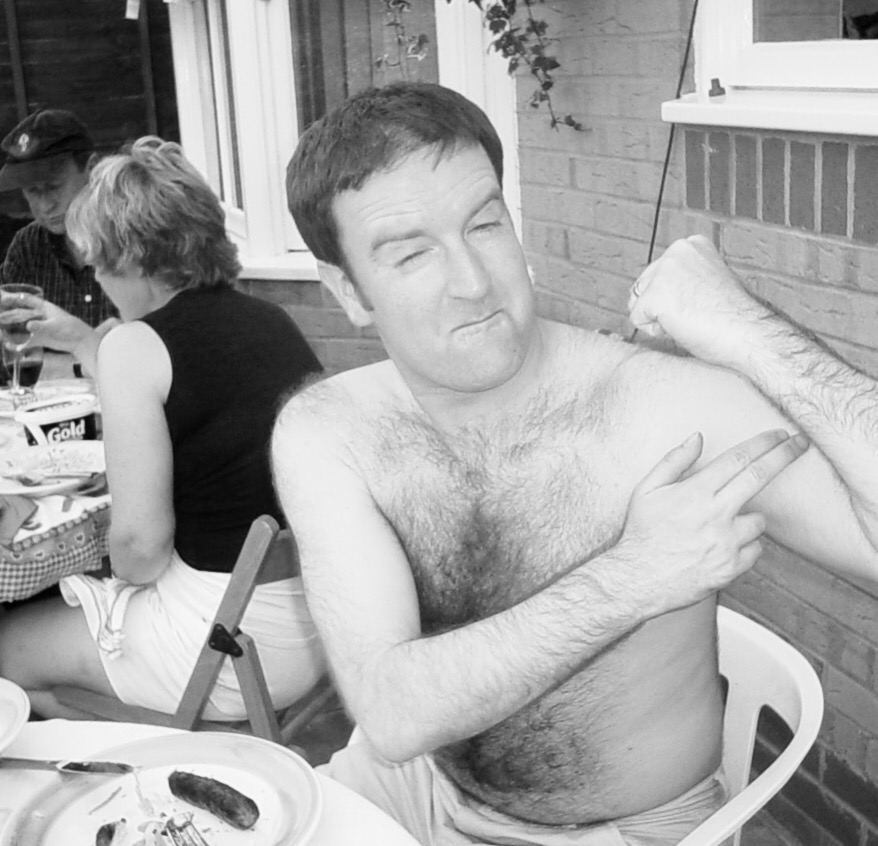 When you look at this picture it may become clear why Karen’s parents aren’t that keen to visit. Reading this blog possibly helps you understand another contributing factor!

Right, I’m off to sing the national anthem of the People’s Republic of Birtley (God Save Our Birtley Baths), followed by airing washing of a different kind!

Oh, and I best not forget I’ve got my wee Mrs to pick up as well! I’ve missed her these last few days, god bless her!

I do realise that airing your dirty washing in public is not big and it’s not clever. But allegedly neither is ex footballer Gary Neville’s penis and that was aired to a significantly large audience than mine.

Actually scratch that comment about Neville, I’ve just read his penis is clever and is in possession of a degree in rocket science from Salford College…… Just to clarify I didn’t find that information out by googling ‘qualifications of Gary Neville’s penis’! You’ll be stunned to know I made this up!

Seriously, though, I love Karen’s parents who are like the mother and father-in-law I never had!…… I’m going now as I haven’t got a chuffing clue where my mind is currently venturing!…… God has just ordered me to stop writing!