With this in mind, not to mention a desire to ‘give something back’ for the treatment and support Karen has received from a cast of hundreds during her incurable illness, I’ve started collecting for Marie Curie Cancer Care.

This involves donning a tabard advertising the charity, wearing a daffodil hat (if you so desire) and standing for two hours with a collection tin providing benefactors with a daffodil lapel pin in return for their donation.

I don’t want a medal for undertaking this or kudos even my motives for writing this are far less self-centred.

What is kudos by the way? I only ask as someone said I deserve it for volunteering for stuff. Is it a Japanese car, a cuddly animal of Far East origins, or a Bond villain perhaps! ……. “Come, come Mr Bond. You derive as much pleasure from driving the Kudos, with its seven year warranty, as I do!”

I’m writing about my volunteer work to try and highlight how fulfilling it can be to undertake two stress free hours with a charity collection tin.

Fundamentally, my driver is to hopefully inspire others to follow suit….. When I say driver I mean reason, not that I have a chauffeur with great humanity….. I had to let him go when he lost his licence for drink/driving.

Volunteer work won’t remove all your cynicism of a world whose wearing troubles are thrust upon us on a daily basis by various media outlets. Often to the detriment of uplifting stories. It should though take you a step towards restoring some faith in humanity.

My mum has a saying she sometimes utilises to describe an impoverished individual which is “They haven’t got two ha’pennys to scratch their arse with!”

Depending on the area I collect in, on occasion I engage with people who’d possibly fit within that demographic audience. I’ve no idea what people donate. I just hope that if it was their last two ha’pennys they put in my collection tin that they have an alternative scratching device…….. And that they’ve washed them first!!

Two Ha’pennys – Despite no longer being legal tender they still have their uses! 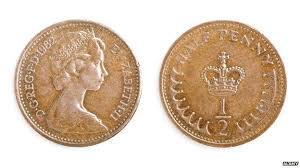 Yesterday, I was collecting in an area that isn’t renowned for its affluence; moreover its effluence (it has a sewage farm a few miles away). However, that didn’t stop a regular stream of donations throughout the two hours I stood there.

As I said I don’t know what people gave to Marie Curie Cancer Care and it’s not the donation size that matters. Being the benefactor of a small amount when poor is equally admirable as a large donation from one who is far more solvent and can afford it. Any amount is appreciated by the charities.

It’s not all sunshine and flowers collecting though. Yesterday a customer (at the supermarket I was collecting in) told me “You’d have got more donations if you’d had a shave you scruffy bleeder!”…… I suppose I shouldn’t expect any different from my mum really!

Seriously though, it was good to see her and my dad as they approached, as I stood collecting with my tin beside the checkouts.

As we chatted I heard a sound of a zip in motion and thought my mum was delving into her purse to donate generously…….. Sadly it was just my dad pulling his flies up!

Anyway, thanks to the generous Morrisons customers for making my volunteer work worthwhile.

My dad yesterday – Thankfully after he’d pulled his flies up! 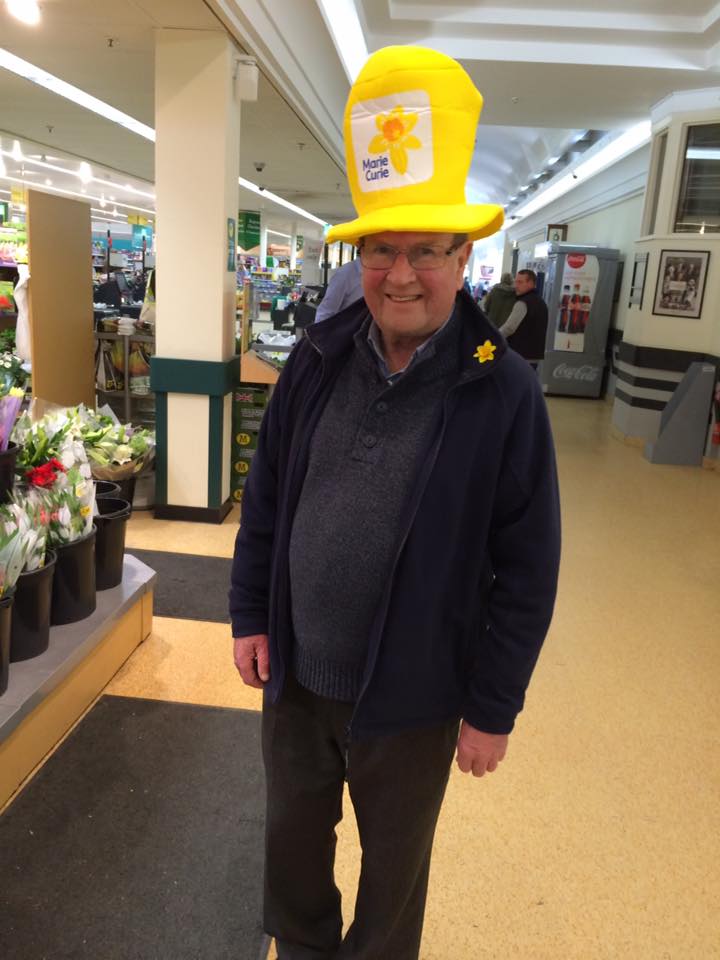