The monochrome scene created by thick nimbostratus clouds, with its associated precipitation, made the journey to St James’ Hospital particularly grim this morning.

As I drove Karen for her four weekly treatment, the only apparent colour on display seemed to emanate from the red, amber and green from the plethora of traffic lights on York Road. The otherwise colourless backdrop wasn’t enhanced by the morose body language of the people wrapped in dark coats, with their collars and hoods turned up against the elements.

I felt like I was in an LS Lowry painting as I slowly navigated through LS9 – the Leeds post code area covering East End Park, Harehills and Burmantofts.

Admittedly, the people looked decidedly portlier and there were less flat caps than those depicted in the acclaimed art of the late Mancunian. However, the mood of disenchanted passers by, in a sunless northern working class backdrop of hopelessness, exhibited similarities. 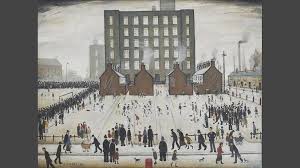 Despite Lowry’s paintings being predominantly set in Lancastrian mill towns, would this dank scene in an area of a Yorkshire city, also built on textile manufacturing, be how the artist would have depicted a contemporary scene of northern working class life? ……… LS Lowry in a LS postcode, if you like.

I first became aware of LS Lowry as a young lad in the 1970’s. This wasn’t a consequence  of studying his art, moreover through a song by a Manchester duo called Brian and Michael.

In their song Matchstick Men and Matchstalk Cats & Dogs they paid homage to the artistic skill of their fellow Mancunian. It was a catchy song that made number one in the British charts in 1978 and introduced me to his work.

LS Lowry not to be mistaken with LS9 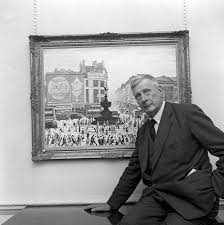 I’m no art critic, although I did receive critical acclaim for a piece I wrote on Chopin’s iconic painting of the Mona Lisa…….. Well my mum said it was alright anyway!

Despite my knowledge void on art, it doesn’t stop me having an opinion, which is ……….. errrr what was I talking about again?! ….. Oh yes, that the pictures I’ve seen created by Lowry do bring to life the grim, colourless life of industrial northern England in the first part of 20th century.

I know I wasn’t born then but from reading and viewing multiple media channels, including newsreels of the time, you can gain a feel for the authenticity of the work.

I suppose what I’m attempting to say is that Lowry’s objective when painting would have been to transport the viewer into the scene of that particular time of industrial northern England history. From my perspective he does; therefore his art works as intended.

Being reminded of Lowry’s work by the people I passed this morning set me thinking. Compared to the era his art was produced, we have more comfortable accommodation, have better sanitation, more opportunity to travel, have greater choices for entertainment, clothing and dining. Despite this are people in 2016 any happier?!

Short term I would say yes, as the greater opportunity to ‘comfort buy’ will give a brief fix during a lifelong search of that holiest of grails – a lottery jackpot win.

If I had a £1 for everytime someone said to me “Fingers crossed I win the lottery on Saturday.” it would have an amount which would be the equivalent of a lottery win!

I’m basing this purely from what I observe, but it has to be said that in the half century I’ve inhabited this planet I can’t recall people being as disengaged, miserable, stressed, medicated, substance reliant, cynical, demotivated, less loyal and lacking in warmth, as they are currently.

The more we have, the more miserable we seem to be. Possessions, or the opportunity to name drop attendance of a big name gig/show, or visiting a sought after location, will give us a short term fix. Long term fulfillment seems far harder to achieve. 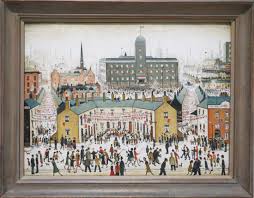 As I’ve written before, I’m not pretending to be some working class hero with my observations. I’m not a socialist, neither is my dad. He’s not a Tory either, despite being a member of a Conservative social club in his village.

He joined the ‘Connie Club’ as the subs were £2 a year and he got a £5 drinks voucher for joining. So effectively they were paying him £3 to be a member! …… Oh and the fact it is 50p a pint helped sell him the deal as well.

My observations are just that, my observations! Some people may agree, some may think they are bollocks and some will want to know the number of the ‘Connie club’ my dad goes to where it’s 50p pint.

Mainly due to no allegiance to any political party, I try to avoid writing about politics. I like and dislike policies of the main parties in equal measure. I did vote in last year’s General Election. However, on reflection backing the Eddie Waring Appreciation Party was perhaps a wasted vote.

Despite this indifference, I do appreciate some of the socialist ‘poetry’ in the song lyrics of Billy Bragg, Paul Weller and Paul Heaton. A year or so back Heaton wrote a song called What Have We Become? which contained thought provoking political points. Below is an example of line from the lyric:-

“‘What have we become?’ said the mother to the half-ton son, chicken wings have replaced the fun. That’s what we’ve become.”